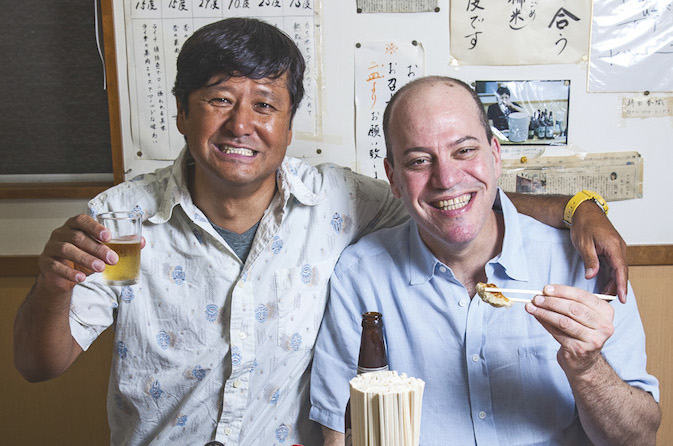 Tonkatsu, ramen, Japanese-style curry—these classics of Japanese comfort food may not exist if American warships hadn’t docked in the port of Yokohama in 1853.

For two hundred years prior to 1853, Japan was deeply isolated, closed off to foreign powers. But the arrival of the Americans set in motion its transformation into a modern nation and radically changed the way it cooked and ate.

New York-based chefs Tadashi Ono of Maison O. and Harris Salat, who runs the restaurant Ganso in Brooklyn, initially set out to write a cookbook about Japanese street cooking. In the process they found that many of today’s dishes emerged in the latter half of the 19th century and early 20th century.

Vegetable tempura, from “Japanese Soul Cooking: Ramen, Tonkatsu, Tempura, and More from the Streets and Kitchens of Tokyo and Beyond.” (Courtesy of Ten Speed Press)

In their introduction to “Japanese Soul Cooking: Ramen, Tonkatsu, Tempura, and More from the Streets and Kitchens of Tokyo and Beyond,” Ono and Salat explain that for a thousand years before the American warships arrived, meat was not part of the diet; forbidden for religious reasons.

Fish, tofu, and vegetables formed the basis of meals.

Once Japan’s gates were forced open, new eating habits took root, and none other than the Emperor of Japan set the precedent—he ate meat in public in 1872. Ono and Salat explain that the Westerners’ “strapping physiques” were credited to eating meat and dairy, and Japanese people were urged to follow suit.

Ono, who grew up in Tokyo, said as a child he thought these dishes were originally Japanese. “But they’re not—they transformed Western-style food into [the] Japanese way.”

His favorite dish is curry, and there are hundreds of variations in Japan, found everywhere from cafeterias to home kitchens. We’re not talking about the green curry leaves used in Indian cooking, but rather the British-style curry powder. Considered a European food, it was adopted by the Japanese navy from the English.

Ono and Salat describe curry as “the ultimately customizable dish.” Hokkaido makes a squid ink curry, and Hiroshima an oyster version. Invariably, it’s thick enough to eat with rice, much like a stew, and contains carrots, onions, and potatoes, and sometimes fruits like apples to add sweetness.

Influences did not only come from the West. China chimed in to result in ramen and gyoza, among others. Korea contributed to Japanese-style bulgogi, which is stir-fried rather than grilled.

Some dishes, like tonkatsu (pork cutlets), started out as restaurant fare, and then made their way into home kitchens.

Many of the innovative restaurants that originally put their inventive spin on foreign dishes are still around. “Those places can endure for centuries, decades,” Salat said.

Many diners think of sushi when they first think of Japanese cuisine, but Salat said: “In Japan, it’s pretty down to earth. In terms of the eating, it’s not terribly expensive or super rarefied. In a lot of places, [like] the train station, you can get a bowl of ramen, you don’t even have a chair. [You’re] at the counter, get a bowl of ramen, chow down, and go on your way.

“[There’s] this soba joint where you can just go in the morning, you can get a bowl of soba, and they have this thing called kara-age—like tempura fritter—just onions or sometimes vegetables. They throw it on top, and chop it up. It’s really delicious. It’s about as elemental as it gets.”

Salat added: “One thing that impressed me about Japan is that there is an inherent or intrinsic understanding of the food culture among pretty much everybody, young and old. You can ask the garbage collector what vegetables are in season now and he or she would be able to tell you in a way that in America, we don’t have kind of cultural knowledge about food.”