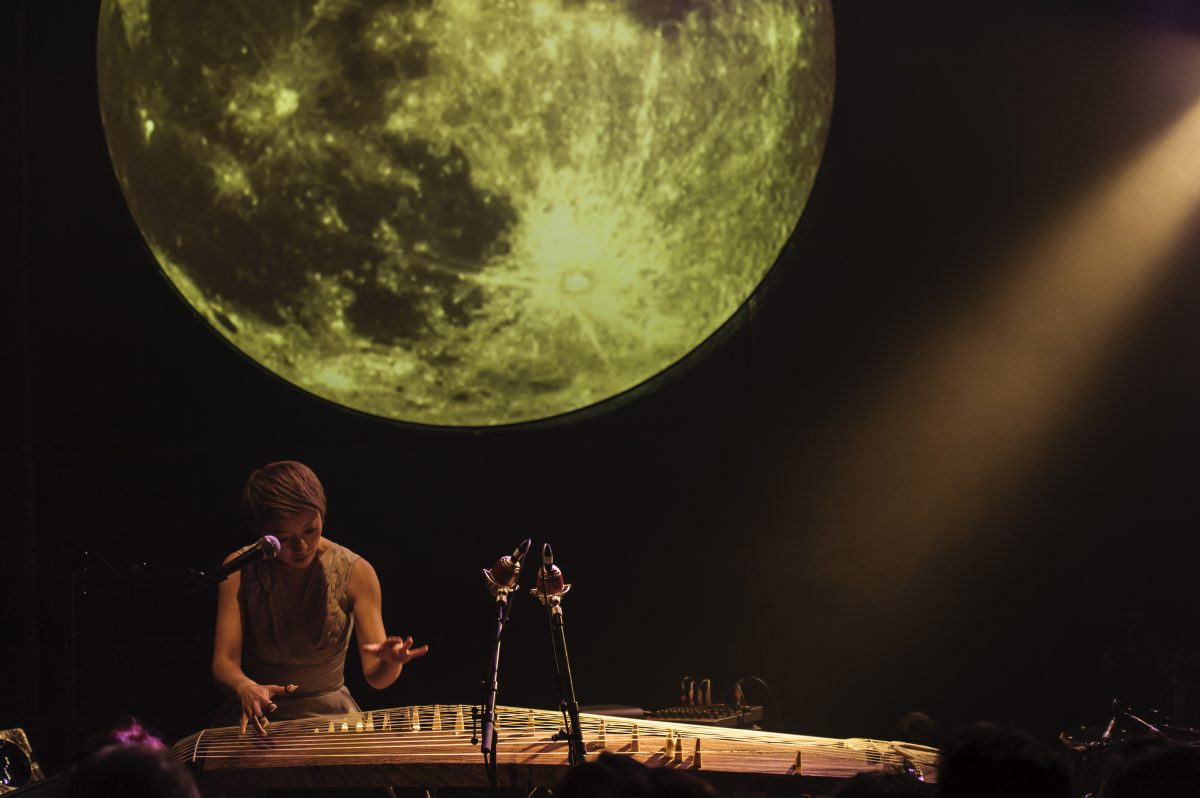 Japanese Zither at the Rubin Museum

NEW YORK—At first pluck the audience knew that Yumi Kurosawa had something beautiful to share. Oriental tones of the koto, or Japanese zither, reverberated through the wooden walls of the Rubin Museum’s private theater on Oct. 23.

Some stories can only be shared through music, not words. Although Kurosawa is a native of northern Japan and speaks limited English, she told the stories of her life that evening.

“I need the story first, before I compose,” Kurosawa said backstage. One of the compositions that she performed was titled “Green Pt,” which refers to Greenpoint, Brooklyn.

The song was not about Greenpoint as a place, but her moments of love, loss, and the realizations that she experienced while living in Greenpoint.

“I have so many experiences during that time,” she said. The piece had a Romantic tone, and a stirring, melancholic melody composed in minor keys.

She also performed her composition titled “One Droplet,” which told the story of the recent tsunami in Japan.

Kurosawa played a variety of songs, from famous Japanese classics to her own compositions. She experiments with electronic music, but no matter what she creates, she always looks for inspiration from the classics.

Kurosawa said she is strongly influenced by the fervor of Romantic and Neo-classic music such as the works of Rachmaninoff and Stravinsky.

“Classical music is my roots. I need that before I can explore and create,” she said.

A Guest Artist
Deep Singh, a tabla player, performed with Kurosawa on Wednesday evening as a guest star. The tabla is a set of drums used in Hindustani Classical music.

A percussionist from London, Singh was a disciple of renowned tablaist Ustad Allah Rakha. With years of experience as an Indian classical musician and an instrumentalist with Western bands, Singh is known for his incredible ability to fuse the East and West in an energetic and creative beat.
The duo performed well together, creating sensational mix of North and South Asian music.

At the Rubin Museum, Kurosawa’s stories mix with spiritual philosophy.

Each musician who performs at the Rubin chooses an artwork that speaks to them and incorporates their interpretation of the work into the music they perform.

The artwork that Kurosawa chose was a sculpture of the Green Tara. The Green Tara, a Bodhisattva who is simultaneously active and meditative, according to Dawn Eshelman, programming manager at Rubin Museum.

Kurosawa said she chose this artwork because the Bodhisattva’s foot is supported by two musicians and a lion, a symbol of how music supports spiritual ascension.

Becoming a Koto Player
Kurosawa didn’t always know she wanted to play the koto professionally. Her parents, Kazuo and Chikako Kurosawa, are both accomplished koto players. As a child, she was frustrated by the strict musical routine they imposed and disliked practicing.

Kurosawa began learning koto at the age of 3. Her earliest memory of playing is at age 5, when she performed in front of a group of people with her mother. She recalled how calm and natural it felt to perform.

It wasn’t until she won the National Koto Competition at age 15 in 1989 that she knew playing the koto was what she was supposed to do with her life.

As a teenager, Kurosawa frequently traveled with her parents during their music tours, visiting Canada, United States, and Malaysia. It inspired her to get a B.A. in international relations in addition to her musical training.

About the Koto
Although the koto originated from China in the seventh century, it has a distinctly Japanese feeling.

It’s a sacred instrument; Japanese monks were once trained to play the koto in monasteries, according to Kurosawa.

The instrument is about 71 inches in length. The traditional Koto has 13 strings, with 13 bridges that are moved to adjust pitch. A modern version of the instrument was refined by Minoru Miki in 1971 to include 20 strings.

Even though switching between the 20-stringed and the 13-stringed kotos is a difficult process that requires a complete mental shift, Kurosawa often goes back and forth between the two, sometimes in the same day. The 20-stringed koto provides a broader range of pitches, but there are some songs that will always sound better on the traditional koto.