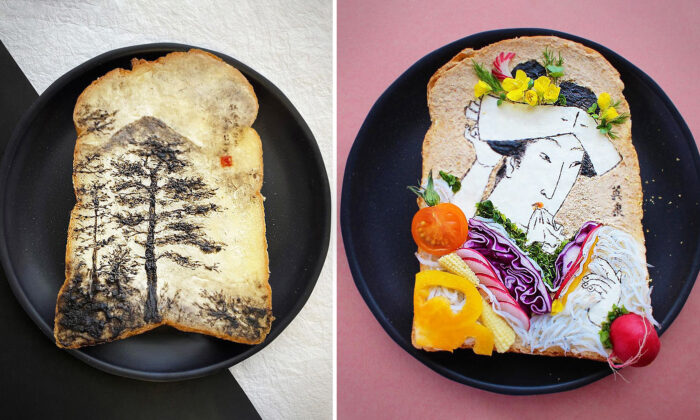 Japanese designer Manami Sasaki has taken her talent to the breakfast table. Using a butter knife, sewing needle, and a pair of tweezers, Sasaki creates intricate renditions of traditional Japanese figures and landscapes, as well as nods to famous artists—all on pieces of toast as her chosen canvas.

The tasty endeavor started in early 2020 and has since gained a huge audience on social media. As Sasaki’s breakfast art—dubbed “Hanafuda Toast”—is entirely edible, nothing goes to waste; the artist eats every piece after she is done.

Sasaki, 28, told Vogue that her toast art was catalyzed by lockdown. “I was spending an hour and a half commuting to work, but working from home led me to wake up late and get lazy,” she explained. “I wanted to get up early in the morning and create a morning routine that would excite me.”

With bread as a staple of her daily diet, the artist said that expressing her art on toast was a “natural progression.” She bought ingredients from her local supermarket, so as to not roam far from home, and began devoting up to three hours each morning to a piece of art—from conception to consumption.

“My mind was aligned with the richness that comes from taking the time to do this,” she told Insider.

Sasaki uses plain bread as her canvas, adding natural toppings only—fruits, vegetables, cream cheese, fish, jams, edible flowers, microgreens, and condiments—to cover the tender, porous surface of egg, flour, and fiber. She assembles the piece raw, using squid ink to sketch fine details, then bakes the work to see what the effect on the final piece will be.

While achieving minute detail with minimal tools, Sasaki is careful to stop before each piece becomes too complicated. It’s also important that the toast tastes good and that people “feel like it’s delicious,” she explained.

Sasaki, who works for a design company and exhibits conceptual art in Tokyo, has been working as a professional artist since high school. She also exhibits her edible creations on Instagram and YouTube to a largely international audience.

For one spring-inspired slice, assembled in April, and posted on her Instagram, Sasaki married smashed avocado with thinly sliced white onion, orange peel, and dill to produce a modern, geometric composition.

“There is a wide range of shapes, tastes, textures, and aromas in a single piece of toast,” she captioned. “The sweetness and crunchiness of onions. The creaminess and soft texture of avocado. The fresh scent of orange and dill in the nose.”

Yet Sasaki knows that toast, like life, is fleeting; each piece has its moment to shine—but then it’s time for breakfast.

“It smells so good when it’s baked that I eat it right away,” she explained, “and since I’m making it as a breakfast to begin with, there’s nothing to be confused about!”