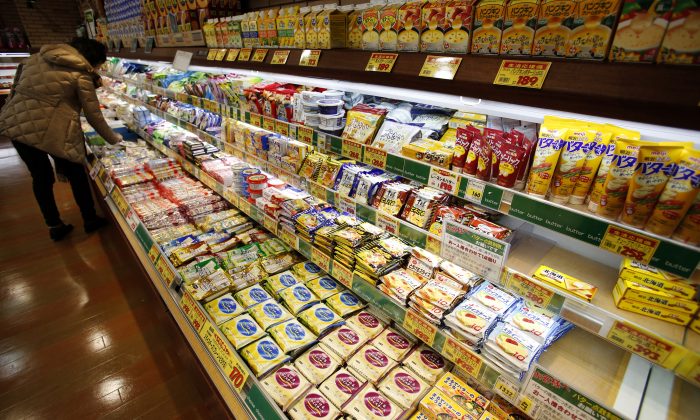 In this Tuesday, Dec. 9, 2014 photo, a shopper chooses dairy products as the shelf selling butter, right, is almost empty at a supermarket in Tokyo. (AP Photo/Shizuo Kambayashi)
Asia & Pacific

Japan Is Running Out of Butter to Feed Its Butter Obsession

Anticipating a butter shortage of 7,100 metric tons this fiscal year, Japanese authorities announced on Wednesday that it will be importing 10,000 metric tons of the dairy product to keep up with demand.

Japan’s Ministry of Agriculture, Forestry and Fisheries said the imports will begin in June and reach the 10,000 figure by the end of October, according to a report by the Japan Times.

Last year, the Ministry also had to import 10,000 tons of foreign butter. Even though imported butter is subject to high tariffs, Japanese consumers couldn’t get enough of it.

Why do the Japanese love butter so much? The Ministry said its decision to import more foreign butter was to ensure enough supplies during the Christmas season—when many Japanese celebrate the holiday by eating a type of buttery sponge cake decorated with whipped cream and strawberries.

How The Cake Came to Be

Eating “Christmas cake,” as it has become known, is a distinctly Japanese tradition that has its origins in the postwar period.

During the U.S. occupation, American soldiers distributed food in the war-ravaged country that had just experienced severe food shortages. Many Japanese began to see American food—especially the sweets—as a sign of affluence and prosperity, anthropologist Hideyo Konagaya wrote in his 2001 paper about the Christmas cake tradition, published in the Journal of Popular Culture.

As Japan industrialized and its economy recovered, ingredients that were once luxuries—like sugar, milk, and butter—became more widely available.

Features of the cake also bear resemblance to ceremonial foods used in traditional Japanese rituals. The cake’s round shape and white color, for example, is similar to “mochi” rice cakes that the Japanese would offer to spiritual deities.

Even though imported butter is subject to high tariffs, Japanese consumers couldn’t get enough of it.

The red of the strawberries, meanwhile, harks back to a traditional belief that the color can repel evil spirits, explained Konagaya. Together, the cake’s red and white reflect the colors on Japan’s national flag.

As the number of dairy farmers in Japan continues to diminish, the production of milk and other dairy products will also fall—bringing more and more demand for imports. In 1985, there were 82,000 dairy farmers who raised 2.11 million cows, according to a report by Japanese newspaper Mainichi Shimbun. In 2014, that figure dropped to 19,000 dairy farmers with 1.4 million cows.

Tariffs on foreign dairy products could be lifted if Japan negotiates the Trans-Pacific Partnership free-trade agreement with participating countries. But some in Japan’s dairy industry are worried that if cheaper imported goods are allowed into the country through the Partnership, it will drive down prices of domestic dairy goods and crush domestic producers, according to the Mainichi Shimbun.

For now, though, it seems Japan’s appetite for delicious cake can only be satiated with imported butter.