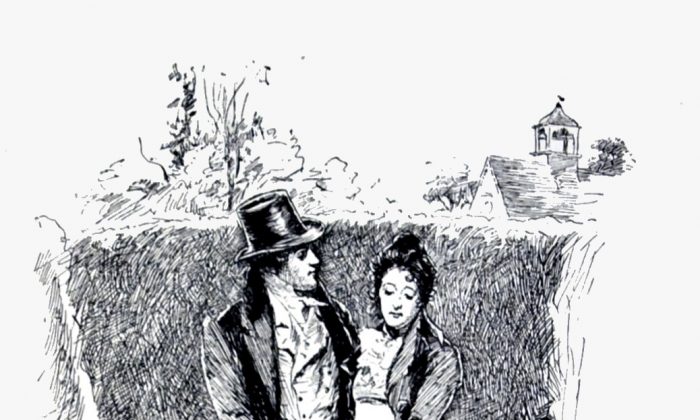 Mr Knightley's proposal to Emma. An illustration by Chris Hammond in the 1898 edition of “Emma.” (Public Domain)
Literature

They look like romances at first sight, and indeed you’d be forgiven for thinking so; the movies attest to that. But read more, and the true themes and threads become apparent in Jane Austen’s novels. For “underneath it all, there are all kinds of things happening that bring out all the various moral virtues, but in an unsaid way,” said Maureen Stiller, honorary secretary of The Jane Austen Society of the United Kingdom.

“All her novels are the same. When you start reading them again, you realize what she’s actually saying,” she said.

It seems the key to appreciate Jane Austen’s work is perseverance and leaving any preconceived notions of the love story behind. Indeed, Stiller assures you, “No matter how often you read Jane Austen, there is always something new to be found.”

In Austen’s “Emma,” you find a detective story, according to author P.D. James. Although there are no murder plots to be read within the pages, there is a mystery that remains throughout the novel both for the reader and, in fact, for Emma herself—a secret revealed right near the end.

The story is set in the village of Highbury, where 20-year-old heiress Emma Woodhouse lives a rather constrained life due to living with her elderly father who’s a hypochondriac. Vain, self-centered, and somewhat deluded, Emma sets herself on a grand scheme of matchmaking, in which she often makes mistakes, despite the warnings of good friends.

Sounds like a love story so far, but remember that underneath it all are life lessons.

Through Emma’s life, we learn the pain of false narratives that appear real, and how she reflects on and learns lessons from her actions, which not only impact her but those around her.

The Epoch Times: How do we experience “Emma”?
Maureen Stiller: Although Jane Austen is writing the story of the narrator, she’s writing it through Emma’s own eyes, through Emma’s self-delusion. And so all these things that she’s seeing and believing, you the reader believe as well, and it’s only people around her who are trying to tell her that she’s wrong, and to be honest with her. So, you go along with it. You think they are all just interfering. But when you get to the end, then you realize how self-deluded she’s been.

The Epoch Times: Can you please give us some examples of Emma’s behavior?
Mrs. Stiller: Not only is Emma self-deluded, but she is intolerant. It’s interesting, because in a way, you still kind of like her. You can still see her, in your mind’s eye, as a very bright, chirpy girl, but then there’s all these kind of traits she’s got.

In her village, there is a poor single woman, Miss Bates, the daughter of a former vicar. But despite her poverty, she is always cheerful, contented, grateful, and interested in everyone—certainly a model of fortitude—and this is in the days without welfare benefits of any sort. This trait recommends her to everyone who, in turn, visits her regularly, presents her with little gifts of apples and other delicacies, and runs errands for her.

Deserved or otherwise, charity was not only considered necessary and expected from the better off, but was also recognized, in philosophical terms, as a solid virtue. It was a matter of etiquette and courtesy in those days, even in small communities, that people paid morning visits, the form being not to spend more than 15 to 30 minutes there. Emma herself visits a poor, sick family with soup and other useful items.

The problem is that Miss Bates is also simple-minded and garrulous and cannot string a sentence together before flying off on another subject. Emma has no patience with Miss Bates, visits her reluctantly, and ridicules her gently behind her back. But at one point, Emma teases her in public, which mortifies the old woman, who bears it with candor and forbearance in acknowledging her own imperfect character.

But Emma’s longtime friend Mr. Knightley, remonstrates with Emma, and charges her with being insolent and thoughtless to someone who, in earlier days, would have been in a much more superior social position and whose notice of Emma would have been an honor. He tells her she has set a bad example to others and should have had more compassion.

Mr. Knightley himself says it was not pleasant for him to say this to Emma, but he would tell her the truth, proving himself a friend by faithful counsel and hoping that she would do him greater justice than she could at that moment. In true contrition, Emma resolves that it would be the start of a regular, equal, and kindly intercourse with Miss Bates and her family.

Another example is Emma’s grand scheme of matchmaking people, which makes you wonder how she manages it in the very small village she lives in. And of course, actually, she’s meddling, and she gets warned by Mr. Knightley that she should leave people alone to get on with their own lives. He tells her to stay away from certain people, but she still insists that she’s going to make a match between the vicar and her young friend, Harriet Smith, from the local boarding school whom she’s just befriended. And of course, the poor girl is rather weak-headed and is led along quite easily by Emma and gets let down frightfully because it turns out the vicar isn’t interested in her at all. He’s more interested in Emma.

Emma actually makes Harriet turn down a match with a very eligible farmer, who’s very much in love with Harriet, because Emma thinks Harriet is above him socially, even though Harriet is illegitimate. And of course, Mr. Knightley says no sensible man wants to be aligned with an illegitimate woman, whether she’s rich or poor.

The Epoch Times: It sounds like, through “Emma,” Austen is highlighting a lot of relatable everyday scenarios.
Mrs. Stiller: Yes, I can think of several times where I’ve been self-deluded, can’t you? And not only have I hurt other people, I’ve hurt myself as well. In actual fact, I opened the book that I had when I was 15 years old, and I’d underlined a passage that actually really spoke to me. Instead of reading it as Emma’s reflections, I remember reading it as if it were me sitting in front of my mirror, looking at myself with a very heavy heart, thinking about all the things that I’d done and just wished that they’d been undone.

The quote I had underlined is near the end of the very first edition of the book, when Emma feels that she’d lost Mr. Knightley:

“This was the conclusion of the first series of reflection. This was the knowledge of herself, on the first question of inquiry, which she reached; and without being long in reaching it.—She was most sorrowfully indignant; ashamed of every sensation but the one revealed to her—her affection for Mr. Knightley.—Every other part of her mind was disgusting.

With insufferable vanity had she believed herself in the secret of everybody’s feelings; with unpardonable arrogance proposed to arrange everybody’s destiny. She was proved to have been universally mistaken; and she had not quite done nothing—for she had done mischief. She had brought evil on Harriet, on herself, and she too much feared, on Mr. Knightley.”

Emma’s been through so many trials during this period and made so many mistakes that she’s redeemed in the end because she’s learned her lesson, and actually, that is the point of all of Jane Austen’s characters. The heroine makes mistakes, but she develops and learns at the end. Not only does she learn from her mistakes, they actually develop her character for the future.