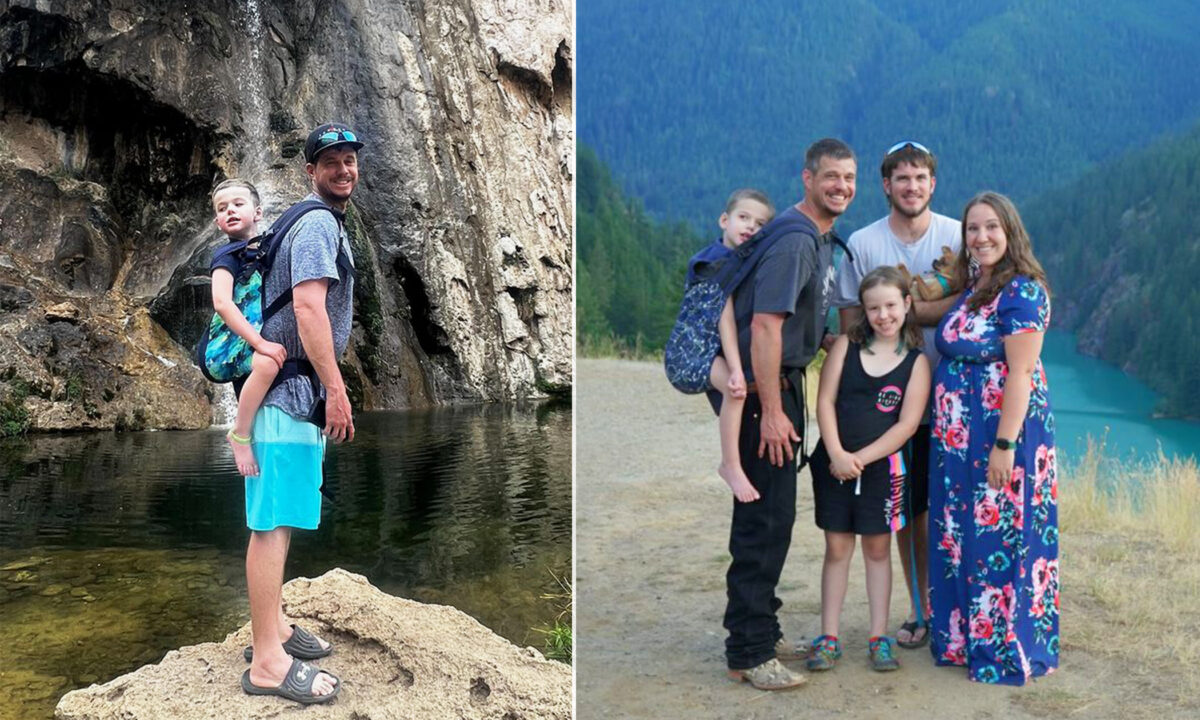 ‘It’s Worth It’: Colorado Dad Carries Disabled Son on His Back While Traveling Across the US

A loving father from Colorado who’s determined to show the world to his 7-year-old disabled son straps on the Kinderpack and carries him along through each of their outdoor adventures.

Robbie Cook was diagnosed with a rare form of epilepsy as an infant. He suffers from daily seizures, is nonverbal, and is cognitively delayed.

“We have always been a family that likes to get outdoors and adventure,” Robbie’s mom, Kristy, 32, told The Epoch Times. “As Robbie has gotten bigger and requires a wheelchair, we began to feel limitations on what we could plan as a family.”

Robbie’s parents have used Kinderpacks to get around with him since he was just 1 year old. But over time, Robbie outgrew what the mom of three could physically carry.

Thus, without hesitation, Robbie’s dad, TJ, asked if there was a larger size Kinderpack available so he could take his wife’s place in carrying Robbie around.

Seeing TJ—who’s a digital creator—carry Robbie, Kristy is well aware of the physical challenge her husband is rising to, but more than that, it’s the way in which he does it that makes her heart swell.

“Sure,” she said, “carrying a 60-pound child on your back for two hours is hard. But it’s watching my husband smile as he does it. It’s never hearing him complain that it’s hard or he is tired. No hesitations.

“He truly enjoys the quality time with our son, and Robbie absolutely lights up when he can explore using his daddy’s legs.”

The couple, who originally hail from Central Florida, had a normal pregnancy with Robbie, who was born full term at 39 weeks.

When Robbie was 6 months old, he had a seizure at home and was rushed to the ER. After extensive testing, Robbie was put on an anti-epileptic drug and sent home. However, three months later, the little boy had his second seizure.

“This seizure was different, and we were sent home upping his medication only for him to have another worse seizure the same evening,” Kristy said. “The ambulance came for the second time in one day and he was stabilized and taken to a children’s hospital.”

After further testing, Robbie was diagnosed with infantile spasms and was put on 10 different medications, and a ketogenic diet, for the course of the next year.

“Eventually, he had a corpus callosotomy brain surgery, severing the main pathway between the right and left sides of his brain,” Kristy said.

Robbie’s parents were terrified and determined to learn everything they could about his condition. But no amount of information or treatment stopped Robbie’s seizures.

Kristy and TJ, who are also parents to  Mason, 22, and Nikki, 9, later relocated to Colorado for access to better medical care for their disabled son.

Since moving to Colorado, Robbie received a camper from Make-A-Wish—a children’s charity that helps fulfill the wishes of children who suffer from critical illnesses. With the camper, they have been determined to see as many places with Robbie as possible while TJ can still carry him.

“Robbie deserves to see all this world has to offer and we plan to push those limitations for as long as we can,” Kristy said.

In the past two years, the family have visited 13 states and 27 national parks. Besides having fun on their adventures as they set out on the trails with Robbie, the pair have also been a massive source of inspiration for other parents of special-needs children.

“I see the way strangers react to them on the trail,” Kristy said. “Initially, our goal was to show Robbie the world, I soon realized the world also needed to see Robbie.”

Robbie’s parents have also created and grown a community of medical parents so that they can be seen and heard. Documenting their adventures via videos, the family hope to show both their good and hard times.

“I hope when people watch our videos … they know they are not alone; we all struggle in different ways, but nature is for everyone,” Kristy said.

The videos have amassed inspiring reactions from people, and more children like Robbie are now out in nature.

Kristy and TJ receive messages from parents sharing that they were finally able to plan their first trip with their children using a Kinderpack. They are now able to go on trail hikes with their kids.

“It’s a butterfly effect and Robbie’s story is spreading awareness and helping other families break the mold, too,” Kristy said.

Kristy emphasized that accessible travel isn’t easy, as it takes a lot of planning. During trips, Robbie’s care plan is the same as it is at home.

“Robbie is strictly fed through a gastronomy tube four times a day, requires full assistance transferring from his special-needs car seat to his wheelchair or the camper, daily medications, vitals, bathing; the list goes on,” Kristy said. “Is it a lot to juggle and pack? Yes, truly it is. It is so worth it though!”

Due to the large number of supplies required, traveling in Robbie’s camper or renting a house has proven to be convenient for the family.

“Accessible travel takes a lot of planning,” Kristy said. “My goal is to help other families by blogging the locations we visit … and taking out the hours of research for them.

“I hope our videos inspire others with all different levels of abilities to get outside and chase their dreams.”