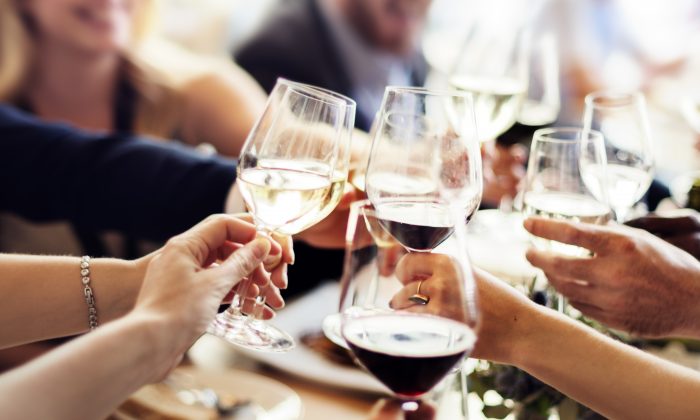 Is Red or White Wine Better for Your Health?

A cardiologist once told me that drinking half a bottle of red wine a day was better preventive medicine than any cholesterol-lowering medication he could prescribe. I wanted to believe him, but as a Chardonnay girl at heart I’ve always viewed the Red versus White debate with some suspicion.

Interest in the health benefits of wine arose in the 1980s due to the so-called French Paradox. At a time when saturated fats were at the height of their demonization, researchers were astounded to find that France, with its high intake of fat, had a lower mortality rate from coronary heart disease (CHD) than the U.K. Le paradoxe Français was most evident in Gascony—home of the fatty Saucisses de Toulouse and the ultimate cardiologists’ nightmare—paté de fois gras.

In Toulouse, for example, a man’s risk of dying from a heart attack was five to six times lower than for men living in Belfast or Glasgow.

In Toulouse, for example, a man’s risk of dying from a heart attack was five to six times lower than for men living in Belfast or Glasgow, while for women the risk was a staggering twelve-fold lower. Yet the French ate as much saturated fat, had similarly high cholesterol levels, smoked as much (if not more) and took as little exercise, so why were their CHD rates lower than for any other industrialized country except Japan?

At first epidemiologists assumed the differences were due to some creative reporting on death certificates, but scrutiny of validated data from the World Health Organization’s MONIC project soon put this under-certification hypothesis to bed.

Was It The Wine?

The idea that drinking wine might offer some protection against heart disease was first mooted in The Lancet as far back as 1979. Researchers were actually investigating whether the level of healthcare in developed countries improved longevity. To their surprise, they found the opposite—as the number of doctors went up, so did infant mortality—but as an amusing aside they noted a strong, negative association between coronary heart disease deaths and alcohol which was “shown to be wholly attributable to wine consumption.”

The French were noted for drinking alcohol on most days of the week, usually with meals.

Soon, researchers everywhere were investigating this compelling association and twelve years later, data from 17 countries in which both wine and dairy fat consumption were known, seemed to confirm the root cause of the French paradox. The French consumed half a bottle of wine each per day, on average, while in Scotland and Ireland, where CHD was rife, the drinks of choice were lager, beer, stout or spirits. As the majority (72 percent) of French wine production was red or rose rather than white, the idea that red wine was the protective factor soon caught on.

Wine drinkers could be forgiven for assuming it was party time—especially as the French were noted for drinking alcohol on most days of the week, usually with meals. In Ireland, in contrast, two-thirds of total alcohol consumption occurred on Fridays and Saturdays, a binge-drinking pattern that had adverse effects on blood pressure compared with regular intakes.

Maybe It Was the Alcohol

Although wine was most associated with protection against heart disease, a review published in the BMJ in 1996 cited four studies showing a similar association for beer, and four for spirits. The conclusion was that all alcoholic drinks were linked with some reduction in CHD, and that much of the benefit must come from the alcohol itself, rather than other components found in the different types of drink.

Alcohol also has an effect on the liver to increase synthesis of “good” HDL-cholesterol which acts like a juggernaut, transporting “bad” LDL-cholesterol away from the arteries and back to the liver for processing. Initially this effect of alcohol on HDL-cholesterol was thought to explain half the level of protection seen against CHD. More recent findings, however, involving almost 150,000 Norwegians, suggest these effects on HDL-cholesterol are not an important explanation; men and women who drank alcohol more than once a week were significantly less likely to die from CHD, irrespective of their HDL-cholesterol concentration, compared with those drinking alcohol rarely or never.

Another more popular explanation is that alcohol has an aspirin-like action to reduce platelet stickiness and protect against unwanted blood clots. This blood-thinning action would also explain the increased risk of stroke associated with high alcohol intake.

Despite the lack of a definite mechanism, it seemed that drinking even a little amount of alcohol was beneficial. Research papers were accompanied by reassuring statements such as, “The only clear message is that moderate alcohol drinking (two or three times a day) has a protective effect against CHD,” and that, “alcohol is a drug that … should be used regularly but only at moderate doses of about 20g to 30g per day. At this level of consumption the risk of CHD can be decreased by as much as 40 percent.”

The Antioxidants in Wine

Around this time, research into dietary antioxidants was also in full swing. Wine is a complex liquid containing many antioxidant polyphenols such as flavonoids, flavonols, catechins, anthocyanins, and soluble tannins. By neutralizing excess free radicals and reducing the oxidation of “bad” LDL-cholesterol, here was another plausible explanation for why drinking wine may protect against coronary heart disease.

Grape skins and pips contain the highest concentrations of the most powerful antioxidants (e.g., procyanidins and phytoalexins such as resveratrol) which protect the grapes against sun burn and fungal attack. Red wine naturally has a higher concentration of these than white wines or champagne, as the juice is left to macerate in contact with the skins for longer to absorb the red pigments. This extra dose of antioxidants offered an explanation for the long-held assumption that red wine provides greater health benefits than white.

The evidence, however, does not agree. Despite the fact that antioxidant polyphenols are significantly higher in red wine, drinking white wine has similar effects on artery dilation. In an admittedly small, cross-over study involving 14 volunteers with coronary artery disease, a significant three-fold increase in flow-mediated dilation of their brachial artery was seen six hours after drinking wine of either color—white or red. As no detectable changes were found in blood polyphenol levels after drinking either type of wine, it appears these antioxidants may not be the active components after all.

Does Red or White Really Matter?

There are obviously lots of confounding factors in that people who drink wine are often women, college graduates, nonsmokers and temperate drinkers, who exercise and follow a healthy diet.

There are obviously lots of confounding factors in that people who drink wine are often women, college graduates, nonsmokers and temperate drinkers, who exercise and follow a healthy diet high in fruits, vegetables, fish, salads, fish and olive oil. This makes it difficult to interpret these studies with anything other than caution even when the data is adjusted in an attempt to account for these differences.

The bottom line is, I can’t find any convincing evidence that red wine is more protective than white wine against coronary heart disease which, given my love of a nice chilled, buttery, Puligny-Montrachet fills me with joy.

Of course, all these associations could be nothing more than chance findings with no underlying causality—drinking wine may not protect against heart disease at all. A similar, statistically significant correlation has been noted between the number of nesting white storks and the human birth rate in 17 countries—which doesn’t necessarily mean that storks deliver babies—despite what my mum used to tell me.

NB If you drink alcohol, limit your intake to moderate amounts (up to 20-30 g/day for men and 10-20 g/day for women), preferably consumed with meals. “The question of whether alcohol intake should be encouraged as a measure to prevent CHD remains unanswered.”

Sarah Brewer
Follow
More articles from this author
Are You Cutting Back on Salt?
sharecomments
22 Ways to Shrug Off Winter Colds
sharecomments
Drink Up: Health Benefits of Coffee Are Numerous
sharecomments