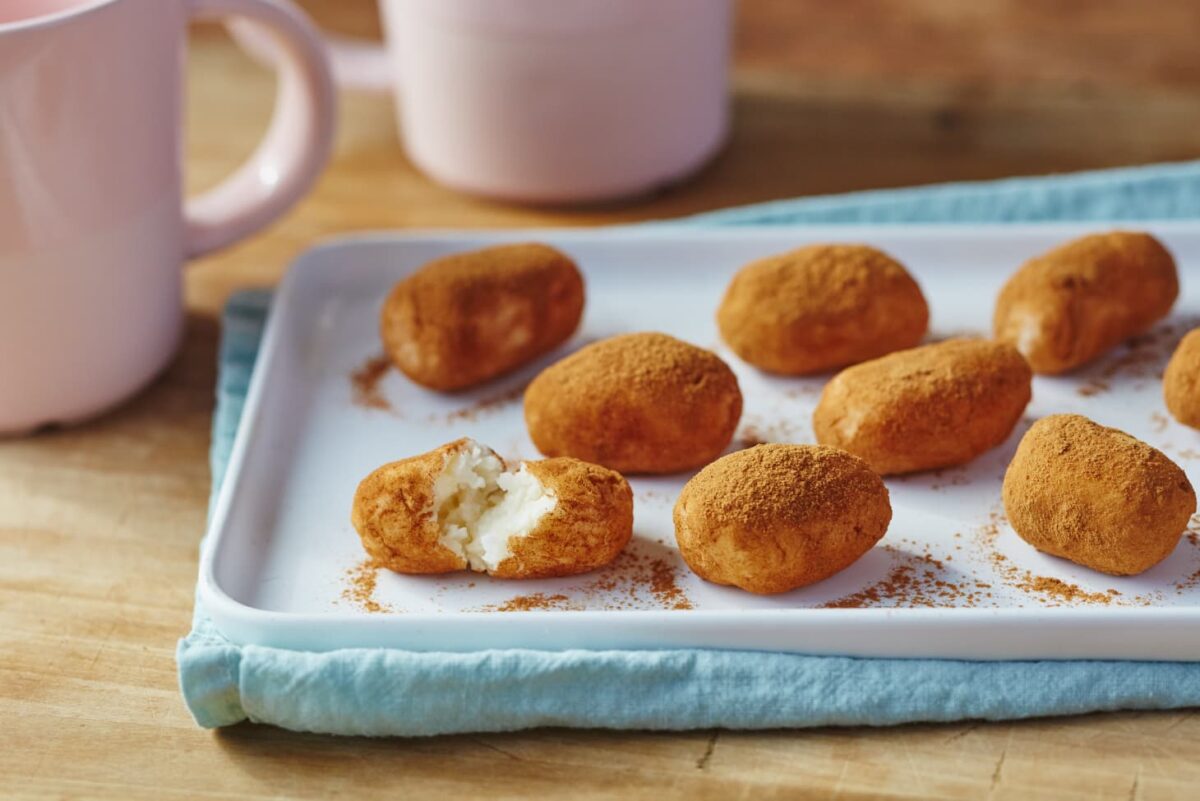 Unless you’re from Pennsylvania, you’ve probably never heard of Irish potato candy. I didn’t know what they were, but assumed they were candy made from potatoes. Wrong!

Irish potato candies may look like adorable little potatoes, but they’re no-cook coconut and cream cheese candies with a coating of ground cinnamon—essentially the coconut equivalent of chocolate truffles.

Sweet Irish potato candy doesn’t have roots in Ireland, but instead was created in Pennsylvania—more specifically, in the Philadelphia area.

They generally make an appearance around St. Patrick’s Day, and while some homemade versions do contain potato, most commercial ones are a blend of butter, powdered sugar, vanilla, and coconut. I like the ones containing cream cheese and a touch of salt to help them from becoming too cloyingly sweet.

Making Irish potato candy is as simple as beating all the ingredients—except the cinnamon—together into a fluffy, sticky mass. To make them easier to roll (and to firm them up if they’re at all runny), scoop out the candy and chill before rolling into little potato shapes and dusting in the ground cinnamon (recruit the kids for this part!).

They can be stacked in a container in the refrigerator for a few days, which means they’re great make-ahead treats. These adorable little potatoes can even be used at an Easter gathering to celebrate spring.

Place the cream cheese, butter, vanilla, and salt in the bowl of a stand mixer fitted with the paddle attachment. (Alternatively, use an electric hand mixer and large bowl.) Beat on medium speed until fluffy and smooth, about 3 minutes. Stop the mixer and scrape down the sides of the bowl and the beater with a rubber spatula.

Line a baking sheet with aluminum foil or parchment paper if desired for easy cleanup. Scoop the coconut mixture out by level tablespoons onto the baking sheet, spacing them close together but not touching. Repeat until all the mixture is used up. Refrigerate for 30 minutes for the mixture to set.

Place the cinnamon in a small bowl. Using your hands, roll 1 of the pieces into a slightly oblong potato shape. Roll in the cinnamon to completely coat, then place back on the baking sheet. Repeat with the remaining pieces.

Recipe Note: Leftovers can be stacked on top of each other in an airtight container in the refrigerator for up to five days.