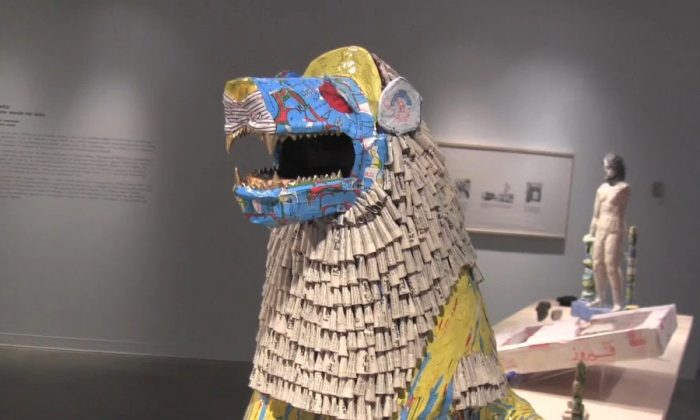 In the initial aftermath of the U.S. invasion of Iraq, looters swept through the National Museum in Baghdad and carted off 15,000 items of incalculable value. Some of these items were destroyed in the attempt to spirit them away. Some disappeared into the vortex of the underground art market. Only half of the items were eventually recovered.

In February 2015, after a dozen years in limbo, Iraq’s National Museum reopened. But it was a bittersweet reopening, and not only because of the thousands of missing treasures. That February, Islamic State (ISIS, ISIL, or IS) militants recorded themselves smashing priceless objects in the central museum in Mosul, a city in northern Iraq that IS had occupied since June 2014. U.S. troops had largely left the country, and Washington had declared the war over. But the destruction of Iraq—its heritage and its people—was still ongoing.

Michael Rakowitz is involved in a massive reclamation project. Since 2007, in a project called “The invisible enemy should not exist,” the Iraqi American artist has been recreating the lost treasures of Iraq. He and his studio assistants locate the description of the objects, along with their dimensions and sometimes a photograph, on the Interpol or Oriental Institute of Chicago websites, which have been set up to deter antiquity dealers from buying looted artifacts. Then they set to work.

“To date, we’ve reconstructed 500 of the 8,000 objects,” Rakowitz says. “It’s potentially a project that will outlive me and my studio.” In addition to the objects looted from the National Museum, they’ve begun to reconstruct pieces that IS has destroyed in Mosul, Nineva, and Nimrod.

Rakowitz recently gave me a tour of an exhibit of these reconstructed objects at the George Mason University School of Art, which was part of the Al-Mutanabbi Street Starts Here Project. The largest piece on display is a brightly colored lion that stands about three feet tall.

“The Tell Harmal lion was destroyed,” Rakowitz says of the lion that once stood in the main temple of the Babylonian city of Shaduppum (today known as Tell Harmal) over 3,500 years ago. “Looters tried to take the head off the lion, and not knowing how fragile the terra cotta was, the entire head shattered beyond repair. We don’t just reconstruct the head but the entire lion: to give the viewer a sense of what that lion’s ghost might look like.”

The lion destroyed in Baghdad in 2003 was various shades of grey and white. But the reconstructed lion has a yellow torso and blue jaws. The difference in coloring is a function of the materials used for the reconstruction. “The artifacts are reconstructed out of the packaging of Middle Eastern foodstuffs and the Arabic-English newspapers available in the United States where there are Arab communities,” Rakowitz explains.

The artist got the idea of using such materials during another of his art projects, the reopening the import-export business in Brooklyn that his grandfather established when he moved to the United States from Iraq in the late 1940s. This art project also involved an attempt to import Iraqi dates as a test case for the lifting of sanctions against the country.

In the process, Rakowitz discovered that packages of date cookies, for instance, rarely indicated the provenance of the fruit, often listing the ingredient as coming from countries that don’t even grow dates for commercial purposes. The sanctions had effectively rendered Iraq invisible. Later, for his tribute to the National Museum artifacts, Rakowitz wanted “to enlist these fragments of cultural visibility to construct what are now for all intents and purposes invisible objects.”

The person most responsible for retrieving so many of the pilfered objects from the National Museum was the former director, Donny George Youkhanna. Having participated in many of the excavations that uncovered these objects in the first place, Youkhanna felt a deep connection to the museum’s inventory.

After receiving a bullet in the mail that clearly suggested that he was in the crosshairs of militants, Youkhanna went into exile. He left for Syria, where he spent six months, and then accepted an offer from SUNY Binghamton to join its anthropology department.

During the creation of his project, Rakowitz formed a close friendship with Youkhanna and was touched that the former museum director visited his show when it was in New York. “He stayed at the gallery for hours, and as viewers came in, he gave tours of the artifacts on the table in the same way he would have given tours back in Baghdad,” Rakowitz said. “Donny George became very emotional about the artifacts. He said, ‘This is probably as close as I’ll get to them again.'”

Youkhanna passed away in 2011 as a result of a massive heart attack while traveling to Toronto. Not only did he die in exile, Rakowitz points out, but he didn’t even die within a country. He suffered a heart attack in the no man’s land between the United States and Canadian customs.

On Anger and Looting

The Iraq War, Rakowitz insists, was not just a disaster for Iraqis. Because it involved the destruction of so many ancient treasures from the birthplace of Western civilization, it was “a disaster for all of humanity.” He adds that, “It was also a lost opportunity when the outrage for missing objects did not translate into an outrage for missing bodies. So, the project does have an angry side.”

Through the reconstruction of these objects, Rakowitz wanted to make the Iraq War more present for American viewers. “In 2006, it was possible to go through Chelsea and not know that a war was going on,” he remembers. “I wanted to find a way of disturbing that. It is an antiquities market that made these objects desirable for the people who looted them for whatever reason. I’m an artist who is dealing with the contemporary art market, which is allowing me to show in a Chelsea gallery. Why not make an object that essentially haunts these collections as an uncomfortable apparition: to make us think about our complicity, conscious or unconscious.”

The name of the project— “The invisible enemy should not exist”—is the literal translation of the name of the street that ran from the Ishtar Gate, which Nebuchadnezzar built in 575 B.C. as a northern entrance to his city of Babylon. The gate was excavated between 1902 and 1914 by German archaeologist Robert Koldewey and then reconstructed at the Pergamon Museum in Berlin.

“The countries of origin have called for the return of these objects,” Rakowitz argues. “There’s a large debate about this and the value of the imperial museum. For me it’s very simple. When things are taken without permission or under questionable circumstances, like backroom deals, this is a problem.”

The effort to reconstruct the objects looted from the National Museum in Baghdad is designed to be part of this debate. “The project has been acquired by several institutions, including the British Museum,” Rakowitz explains. Both the British institution and the Metropolitan will “take these replicas of looted artifacts from 2003 and put them next to Mesopotamian artifacts that they got under questionable circumstances.”

The juxtaposition of items representing two different eras of looting is a kind of artistic truth-and-reconciliation process.

“I appreciate when museums can be self-reflective or even critical when looking at its immense inventory the provenance and acquisition history of some of these things and to allow for some of the more uncomfortable stories to emerge,” Rakowitz points out.

At the same time, the objects that the British Museum or the Metropolitan essentially looted from Iraq many decades ago have at least been kept safe from the latest round of destruction. “Many Iraqis were calling for objects at the British Museum to return to Iraq,” Rakowitz says with a measure of sadness. “In the immediate aftermath of the looting, this attitude changed and these same Iraqis regarded those artifacts as fellow refugees and exiles just like themselves.”