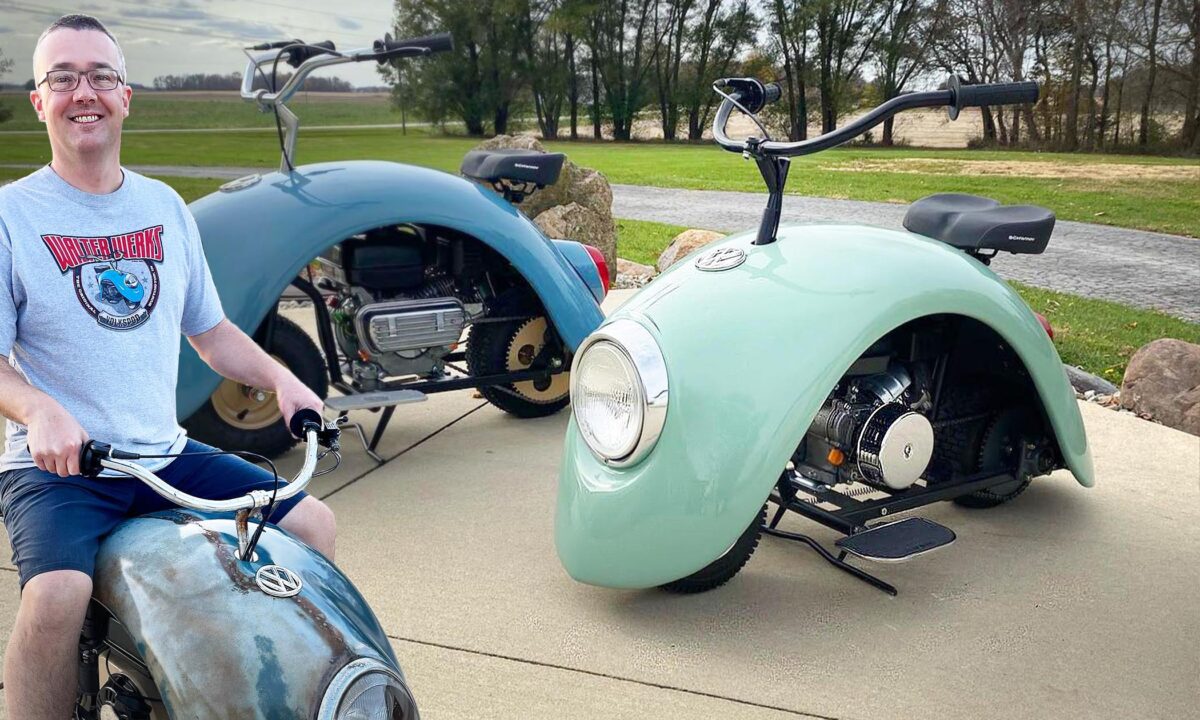 They look a bit like Volkswagen Beetle’s baby brother.

Creator Brent Walter started building his VW-inspired, motorized minibikes out of old fenders — not so much for a utilitarian purpose as out of a sense of fun.

The 47-year-old inventor from Huntingdon, Indiana, stumbled on the idea after spotting inventions online, which were made from car fenders. He was also inspired by metal artist Randy Grubb, who built custom scooters called “Decopods.”

The novel results of Walter’s brainchild are adorably amusing.

“I just make them for fun,” Walter told The Epoch Times of his Beetle-themed creation. “I had four fenders left over from a project and started cutting and welding them in February of 2019.”

As soon as he started, it was clear he had a winning concept on his hands.

“When I started creating the body shape, it was evident right away that it had a good flow and was going to look cool,” he said.

And look cool they do.

With oversized headlights and original VW Bug colors, the scooters have a distinctly vintage vibe.

Walter then built a minibike frame to fit within the body, housing a simple single cylinder engine and automatic transmission.

“Just twist the throttle and it goes!” said Walter.

The tiny bikes, called “Volkspods,” travel at around 25 miles per hour. So far, Walter has made four, and has parts for a fifth which he’s now tinkering with. Only one has been sold so far, to TV star Robbie Wolfe of “American Pickers.”

Walter began his mechanical musings at a very young age, and eventually worked in medical instrument manufacturing for over 20 years. Though he’s always had his own projects on the side.

“I took wood and metal working classes in high school, and I built a go cart in my welding shop class,” he recalled. “My hobbies have always been working on cars, metal working, wood working.

“My father and grandfather have similar hobbies.”

Far from being protective of his design, Walter says he’s delighted to see others taking cues from it.

“I think the best part for me has been having people contact me to tell me they were inspired to build one themselves,” he said. “People have told me they learned to weld or built one with their dad, that sort of thing.

“I think it’s important that people still learn to work with their hands and be creative.”

Walter has seen Volkspods pop up as far off as Brazil and Thailand, while several companies are building the minibikes to sell.

Is he taken aback by how popular they’ve become?

“They do seem to appeal to a very large range of people from all over the world. I’ve seen them on such a variety of websites,” he said. “I was just wanting to build a minibike to take to car shows along with my custom built 1967 Volkswagen Beetle.”

He added, “I’ve not heard from Volkswagen, but the Beetle is iconic, the shape is recognized all over the world. Even my Volkspod is instantly recognized as being made from Beetle parts.

“I’ve been asked multiple times a day for the last few years to sell them. It was never my plan to make it a business — it was really more of an art project for me.”