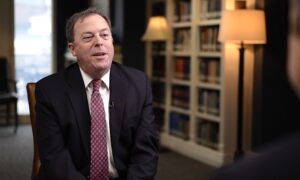 Tammy Lane, founder of Capernaum Studios, is directing an upcoming series about the story of a young George Washington, emphasizing his spiritual journey.

Lane believes that, just as Washington’s faith in the divine guided him to success against all odds, she is being guided by divine forces to tell a forgotten story of the first American president.

Lane said that they started working on building 1st century sets in 2005 because she wanted to make some Biblical films. They opened in 2008 and started with three productions per year.

“The Lord started bringing in other filmmakers, which is really what the dream was in the beginning, the vision, and in 2018 it really hit and then after that it’s just spiraled.”

Lane spoke about her newest endeavor, “Washington’s Armor,” and how it came together, adding that it started with her reading “The bulletproof George Washington” by David Barton 17 years ago.

“I knew that this story needed to be told, you don’t see it in history books,” Lane said. “I never knew about it until I read that book. And it is really God’s providence over Washington.”

She said that Washington was a person that had a high level of integrity. He was not perfect—he had a temper and was rather sickly, having had tuberculosis multiple times, malaria, and dysentery on different occasions—but he had endurance, and facing impossible odds, he pulled through. Even when sick, he would still go to battle, and he never got hit by enemy fire.

She said she believes that it was his faith that protected him, and even though people of other beliefs surrounded him, they could see that he was being protected by higher forces.

“He was shot at several times and it never went through his jacket,” she said. “He never was injured in battle, although he was sick in battle.”

“I like that he really held a strict code and in his military with his men. He didn’t like foul language.” Lane went on, “If he found them drunk, he would be upset. You know, he had a temper back then, I think that he really worked on that through his life and that got a lot better later.”

“He was just a very moral person.”

Lane and her crew are planning six episodes and maybe a second season. The idea grew from a short film to a long-form film, and then to a series because there was so much to be told about Washington and the characters and exchanges of ideas that were going on at that time, such as the clashing of the “enlightenment” movement and the gradual abandonment of faith during the French revolution, contrasting with the establishment of a faith-based nation under God with the American revolution.

Responding to how in many modern films, the narrative shies away from faith and religious belief, Lane said she wanted to give an accurate depiction of the story without forcing anything.

Asked what she hoped to build through the effort, Lane said, “I really want people to know God first and foremost, and I want to give glory to Him.”

“Because if it wasn’t for the Lord, I wouldn’t be here, I wouldn’t know anything,” Lane added.

“I never aspired to be a filmmaker, you know. It just kind of happened as I started following the Lord, and I love it. I’m excited that I get to do this. But I really want people to be blessed to be at Capernaum,” Lane said.

“I think people really enjoy being out here. I love having all these people out here. And also with the stories I tell, I want people to understand the foundation of our country.”