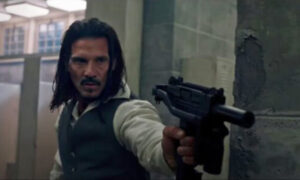 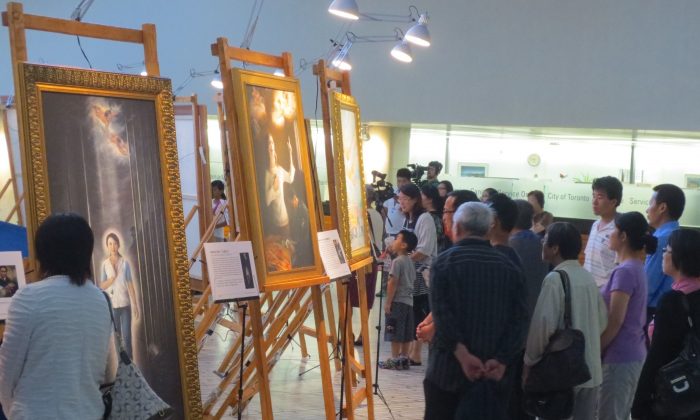 Taking place right in the heart of Toronto, the nine-day exhibition features works that give unique insight into the spiritual practice of Falun Dafa (also called Falun Gong). The works also depict some of the ordeals that Falun Dafa practitioners are enduring in China due to a campaign of persecution by the Beijing regime.

The Zhen, Shan, Ren exhibition is shown all over the world, but this is its first time at Toronto City Hall. Coincidentally, it opened just one day after the 15th anniversary of the launch of the persecution against adherents in China, which began on July 20 1999.

During the opening ceremony, Joel Chipkar of the Falun Dafa Association of Toronto read a greeting letter from MP Costas Menegakis, MP for Richmond Hill and Parliamentary Secretary to the Minister of Citizenship and Immigration, and from city councillor John Parker, who sponsored the exhibition.

One of the guest speakers was Sheng Xue, a Canadian journalist, writer, and president of the Federation for Democratic China. The longtime human rights activist said she has vivid memories related to the crackdown on Falun Dafa adherents in China 15 years ago.

She noted that her favourite painting was “After the Parade,” as it shows the nobility and richness of the Chinese culture, the beauty of traditional dress, and the spirituality that for centuries was an integrated part of Chinese life.

The art was praised by visitors for its deeply moving and inspiring content. Pablito Greco, an artist, dancer, and professional performer from Greece, said there were three or four paintings in particular that communicated directly with him.

“The quality of the paintings is higher and their meanings are diverse, rich, and definitely inspire with a different perspective for the audience. This is the goal of an artist—to inspire everybody, anytime, anywhere.” he said.

“I think this exhibition means to do that very successfully. A touching painting makes me want to express and share emotions with my movements as a dancer.”

The exhibition, which will run until July 28, received support from several federal and provincial members of Parliament, city councillors, and local organizations.