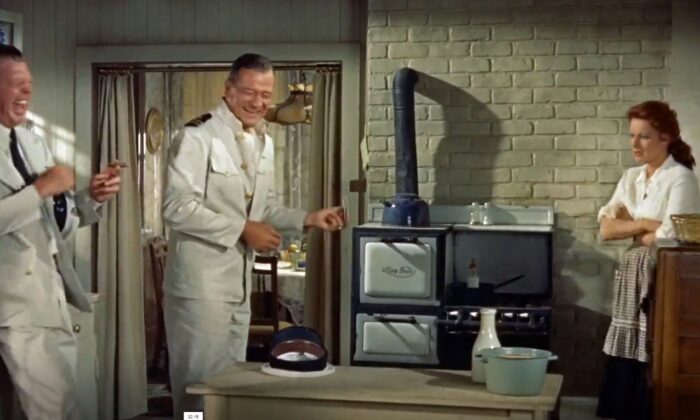 Popcorn and Inspiration: ‘The Wings of Eagles’: A Sentimental, Multifaceted Character Study

One of John Ford’s more sentimental films, “The Wings of Eagles” is a biopic about Ford’s friend and frequent filmmaking collaborator, Frank “Spig” Wead. Ford was inspired to make this 1957 film 10 years after Wead passed away, as a dedication to his friend.

The film is based on a 1944 short story by Wead, published in an issue of The American Magazine. The story was adapted for the big screen by screenwriters Frank Fenton and William Wister Haines.

The first act of the movie takes place right after World War I and details Wead’s younger years as a reckless U.S. Navy junior officer. His life mainly consists of rowdy times with his drinking buddy “Jughead” Carson (Dan Dailey). During an impromptu bout of naughtiness that culminates with Wead flying a plane (which he isn’t qualified to operate) into the backyard swimming pool during a senior officer’s banquet, he narrowly avoids being court-martialed.

Unruffled, Wead drives home drunk from the court-martial hearing with Carson and enters his one-bedroom cottage, which he and his wife, Minnie “Min” Wead (Maureen O’Hara), occupy with their infant son. Minnie is irate at his behavior, and we first see that Wead’s priorities are more skewed toward partying than spending time with his family.

Things take a tragic turn when the couple’s baby dies due to a high fever. After a grieving period, Wead becomes more serious about his military service. Rising out of the ashes like a phoenix, his newfound passion is to prove that combat aviation has a place in the Navy. He attends aviation training at the Aeronautic Station in Pensacola, Florida. After he successfully graduates, Minnie proudly pins his golden flight wings onto his uniform.

The Weads have a couple more children, two daughters, and their family life is relatively good despite the usual quibbles. Wead begins to heavily promote the concept of air racing in order to develop naval aviation as viable to the public, other military branches, and especially Congress (for funding).

Wead’s push to legitimize naval air power places his Navy aviation team in direct conflict with the Army aviation team, and an intense rivalry develops between them. Racing and endurance competitions are organized, and the two teams compete against one another.

As Wead throws himself more and more into his mission of proving naval aviation prowess and breaking various air racing records, he spends long periods away from his family. When he does return, with a promotion to the fighter squadron commander, ill fortune strikes again: He tumbles down a dark stairway at home and breaks his neck, resulting in paralysis.

The paralysis leads to depression, which, in turn, has repercussions on his marriage. But Wead accepts the visits and encouragement of his Navy friends, particularly Carson. Throughout the years, with the constant help of Carson, Wead begins to recover somewhat physically. Carson also inspires him to follow another career.

As Mead begins the process of reconciling with his family, the attack on Pearl Harbor occurs. Will he continue to reunite with his family, or is the call to serve his country once again, too tempting?

One of the things I really enjoyed about this film is that it switches between peppy humor and weighty drama rather effortlessly. It also showcases John Wayne’s wide acting range, since he plays a sensitive and thoughtful character—against type. (He even tears up in one scene.) O’Hara is compelling as usual, and she and Wayne fit well together. After all, they were frequently paired throughout their acting careers.

“The Wings of Eagles,” then, is a rousing portrait of a complex man and an excellent tribute to one of the founders of naval aviation.