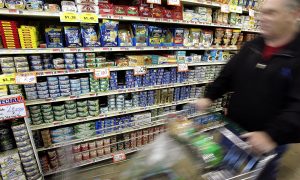 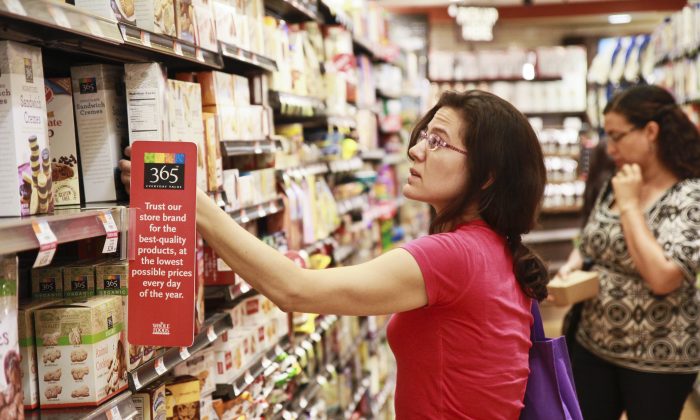 A woman picks up a box of Chocolate Sandwich Cremes from a shelf in a Whole Foods store in the Chelsea neighborhood in Manhattan on July 2. (Ivan Pentchoukov/Epoch Times)
Food & Dining

NEW YORK—The storefront windows of the Whole Foods market in Chelsea are decorated for a cause.

One window reads “88% of corn grown in the U.S. is GMO. The U.S. government does not require GMO foods to be labeled.”

Another window trumpets the company’s commitment to label all of the GMO products in its stores by 2018.

GMO, or Genetically Modified Organisms, are found in about 80 percent of all packaged food in the U.S., according to the Organic Consumers Association.

A large number of products in Whole Foods stores are already labeled as non-GMO or organic, but some have neither of the labels which may mean that they contain genetically modified ingredients. (An organic label already means that a product is GMO-free, but some companies choose to certify their products for both seals.)

“Non-GMO has been a major trend for Whole Foods Market,” Errol Schweitzer, executive global grocery coordinator at Whole Foods, said at a panel on GMOs at the Javitz Center, July 2. “It really said to us that our customer base is voting in larger and larger numbers for non-GMO and by extension organic foods.”

As support for labeling genetically modified foods grows, Whole Foods is now among more than 600 companies and organizations that are pushing for the cause. They have voiced their support for the Just Label It! project, which has already motivated 1.2 million people to call the U.S. Food and Drug Administration (FDA) to voice their concerns.

“UNFI absolutely supports the full disclosure of product ingredients and especially GMO products,” said Melody Meyer, vice president for policy and industry relations at UNFI. “We believe that the cultivation of GMOs is potentially harmful to human and animal health and the environment.”

Chipotle, another national chain, provides a list of its ingredients, clearly labeling those that are genetically engineered. The list is currently on Chipotle’s website, but is not available in restaurants.

The Food and Drug Administration (FDA) says GMOs are safe, but doctors, farmers, and researchers disagree. Scientists from the University of Sherbrooke Hospital Centre recently found pesticides associated with genetically modified foods in the bloodstream and umbilical cord blood of pregnant women. Studies by the National Academy of Sciences suggest that genetically modified crops can introduce new toxins into the food supply chain. But, unlike the medications the FDA approves for human use, genetically modified foods have not been studied and tested for adverse effects.

Some 64 countries worldwide either prohibit foods that contain genetically modified ingredients or require they be labeled. The United States is still behind, partly due to powerful lobbying on behalf of companies like Monsanto and DuPont, the world’s largest producers of genetically engineered seeds. Monsanto, DuPont, and large food companies like Pepsi and Coca Cola spent $45 million to defeat Proposition 37 in California, which would have required labeling of genetically modified foods statewide.

On May 25, over 2 million people rallied in 55 countries against Monsanto and GMOs.