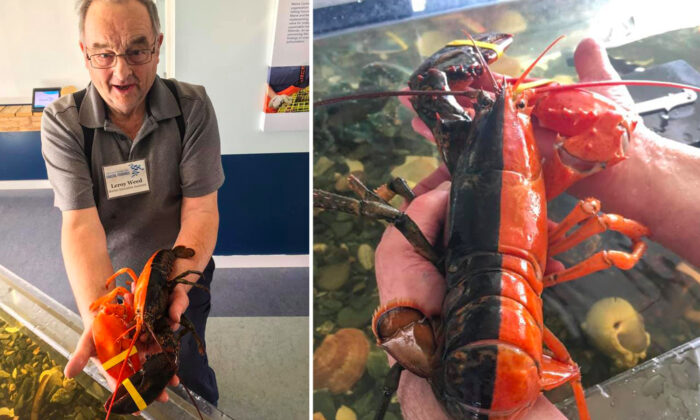 A fisherman in Stonington, Maine, found an incredibly rare two-toned lobster, which went on display at the Maine Center for Coastal Fisheries. Due to its unique coloring, the animal was spared the fate of being cooked and was released back into the ocean.

According to CNN, Captain Daryl Dunham was the fisherman who discovered the unusually pigmented crustacean in September 2019. The man was fishing around the Stonigham area, which is southwest of the Bar Harbor, when he came across the lobster. The animal is split symmetrically down the middle, and it’s half black and half orange. The chances of finding one such lobster are one in 50 million.

Captain Dunham shared his discovery with the Maine Center for Coastal Fisheries. The remarkable find was displayed at their education center, Discovery Wharf, along with three other noteworthy colored lobsters.

The fisheries took to social media to express their excitement about the new addition to their education center. “We’ve seen some pretty cool lobsters in our marine touch tank over the years, but this one might be a first! Visit Discovery Wharf and learn all about Maine’s iconic lobster fishery,” Maine Centre for Coastal Fisheries said on Facebook.

Other crustaceans that shared the tank with the bicolored male included one blue lobster and two calico ones that have dotted orange-and-black shells. According to scientist Matt Thaluhauser, who spoke to CNN, the chances of having all four of these rare specimens in one display tank are “90 octillion” to 1.

The Center also expressed their desire to encounter more lobsters with rare color patterns. “If a local fisherman finds a unique lobster (such as a blue or two-toned lobster, etc.), they are welcome to donate it to our marine touch tank for educational purposes,” the Center stated, per WTHR.

This particular orange-and-brown lobster spent just over a month on display in a special tank where visitors were able to touch the incredible-looking creatures. He was then thanked for his service and, in October 2019, released back into the New England waters where he was found.

Incredible as it may be, this lobster isn’t the only one of its kind to be captured in Maine. In 2015, National Geographic reported on another crustacean with similar coloring found in the area. The executive director of the Lobster Institute at the University of Maine, Robert C. Bayer, spoke with National Geographic then and explained the unusual coloring is most likely due to a genetic mutation. However, “I don’t think the actual mechanism is known,” Bayer told National Geographic.

Watch the video of the lobster being released:

Two-toned lobster released back into the ocean

Last month, local fisherman Daryl Dunham caught a two-toned lobster (1 in 50 million find) in the Penobscot Bay and donated it to our marine education center, Discovery Wharf for educational purposes. The lobster attracted many fans from all corners of the country – Maine, Florida, California, and beyond (even London)! Today we released the unique lobster back into the wild.

Discovery Wharf encourages those curious to learn more about these fantastic crustaceans to visit their education center.

Such an unusual discovery became the subject of opinions amongst Facebook users. One user exclaimed, “Wow!! Great addition to the tank!” While another humorously remarked, “It looks like half of it was cooked already.” A couple of comments included pictures from other Facebook users who themselves have encountered similarly colored lobsters.

The variety in colors lobsters can have is indeed incredible.