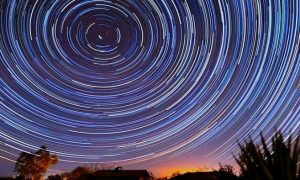 Incredible Time-Lapse Video of Milky Way, Grand Canyon: ‘That Which Awaits the Dawn’

Cloud shadows slip over the dusty land, a strange hut stands out against a periwinkle sky. Low-hanging clouds of an ethereal yellow hue stream between an inky, starlit sky and shadowy rock outcroppings. The tall stone formations stand like ancient statues, cast in a red light that turns to black.

It’s as though you’re watching a thousand years pass, not just a matter of hours or days.

As the Milky Way moves with the turning of the Earth, brilliant trails of light blaze through the sky.

This video is equal to the beauty of it’s name, YIKÁÍSDÁHÁ (Navajo for Milky Way or “That Which Awaits the Dawn”).

In April, Gavin Heffernan was visiting Northern Arizona University (NAU) as an “artist in residence” to talk to the photography class about his time-lapse experiences. That’s when he captured this amazing footage of the Grand Canyon National Park and Monument Valley Navajo Tribal Park. He collaborated with his former American Film Institute classmate Harun Mehmedinović, who is now a professor at NAU.