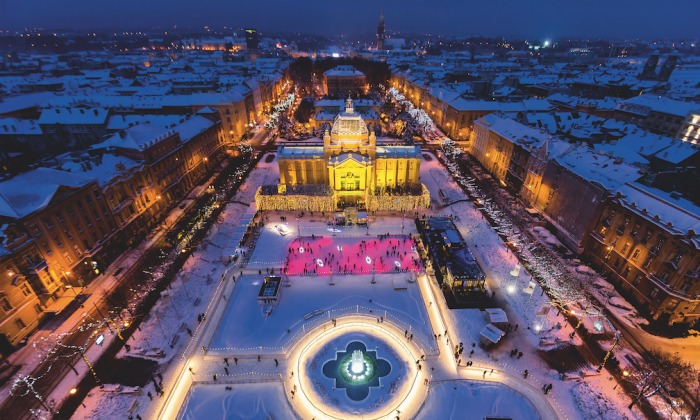 Zagreb puts on its best colors for Advent season, offering dozens of attractions, such as ice skating in King Tomislav Square. (D. Rostuhar/Zagreb Tourist Board)
Destinations

In Zagreb, Croatia, Europe’s Best Christmas Market Goes All Out for the Season

ZAGREB, Croatia—In the summer, vacationers flock to Croatia’s Dalmatian coast to lounge on pristine beaches and soak up the Mediterranean sun. But come Christmas season, the country’s continental capital takes its turn in the spotlight.

Zagreb goes all out for the holidays: The city’s Advent in Zagreb has been voted Europe’s best Christmas market by European Best Destinations’ public poll for three years in a row.

The celebration is a citywide affair. As the sun sets and the sky begins to dim, thousands of lights—canopied over streets, wrapped around tree trunks, draped across their branches and down their sides in glittering curtains—sparkle to life. Charming Christmas chalets are ubiquitous across town, some serving sausages and sweet pastries and mulled wine full of fragrant spice, others awash with handcrafted Croatian goods and holiday ornaments galore. The merriment is palpable.

Everywhere, people take to the streets in a great sea of puffy coats and knit pom-pom-topped hats, their constant buzz of conversation and laughter mingling with holiday melodies in the air. It’s barely a breath above freezing when I join them, but there are so many bodies huddled together that I hardly feel the cold. And when body heat and pure, giddy Christmas excitement aren’t enough, a steaming cup of wine—or for me, hot chocolate, rich enough to coat the tongue—does nicely.

The season kicked off this year on Dec. 1, and will run until Jan. 6. More than a dozen locations around the city center have set up shop, from ice skating in King Tomislav Square to live concerts, performances, and caroling in churches and the main Ban Jelacic Square. Various museums and galleries supplement with special exhibitions and events.

Visitors hail from across Croatia and around the world. Other than the music, my soundtrack is a mish-mash of languages: I count English, Croatian, Korean, Japanese, and Chinese, and surely miss countless others. I only pick up bits of Croatian during my visit—“bok,” a multi-purpose greeting and farewell, and “hvala,” the indispensable “thank you”—but at Advent, the high-pitched cries of children everywhere force another into my vocabulary: “Fritule!”

They’re begging for the sweet, orange-scented Croatian doughnuts traditionally made and eaten at Christmas. Golden-crisp on the outside and fluffy on the inside, the bite-sized balls are sold at every other stand, served freshly deep-fried, piled into plastic cups, and finished with toppings like powdered sugar and Nutella. They’re the perfect warm, sugary fuel for wandering the town.

A Newcomer to the Scene

As far as Christmas markets go, Zagreb’s, at least as it stands today, is a baby.

The underlying traditions reach back centuries: December has long been a time for celebration, when farmers, freed from the laborious work of the harvest season, had little else to do. (The Croatian name for the month, “Prosinac,” has ties to the expression for proposing, a local explained with a wink, referring to how young men often spent that down time courting the ladies of the town.)

At the same time, as per Christian tradition—86 percent of the Croatian population identifies as Catholic—Advent season, the four weeks leading up to Christmas, has long been celebrated as a time of waiting and preparation for the birth of Jesus.

But up until recent years, Zagreb’s festivities were small and low-key. There would be a Christmas tree, of course, and perhaps a few houses in the main square—but “nothing special,” Ivana Fijan, a local guide, told me with a shrug.

As Croatia began to see a growing influx of tourists, though, Zagreb, helmed by fresh, young leadership on its tourism board, saw an opportunity to grow.

Four years ago, Advent in Zagreb debuted in the city’s popular Zrinjevac Park. Just the following year, in 2015, it nabbed its first title of best Christmas market in Europe from Brussels-based organization European Best Destinations, beating out better-known stalwarts like Dresden, Strasbourg, and Vienna—and surprising even locals, Fijan admitted.

So what pushed Zagreb above the rest? For one, in its smaller and easily walkable city center, festivities are abundant and concentrated—“the city feels so alive; it feels like the whole city is involved,” Fijan said. Indeed, the markets seem to span every street. Sparkling lights and mulled wine greet you at every turn; wander anywhere and you’re bound to stumble into a party.

There’s also the freshness of the scene: “Zagreb is something new,” she added, a welcome change of setting from the usual destinations. But if still relatively off-the-beaten-path now, it won’t stay that way for long. Since its conception, Advent has only gotten bigger and bigger with each year, drawing more and more visitors and international attention. This year is no exception.

The Spirit of Advent

Between the motley markets and events, there’s a perfect Advent experience for everyone. I find mine on an afternoon at Strossmartre (a playful reference to Paris’ Montmartre), held along the Strossmayer Promenade in Zagreb’s historic Upper Town.

Though evenings and nights draw the biggest crowds, most markets are open throughout the day. The streets are quieter now, and the lights, of course, unlit. But they hum with a festive energy nonetheless—in large part due to the constant stream of holiday music—with a vibe that’s more relaxed. This is when the locals come out, one of them, Lidija Seler, tells me. In the coming nights, when the city swells with visitors, she’ll escape elsewhere.

“[It’s] Advent fever in Zagreb!” she exclaims with a laugh. “Advent is on every side of Zagreb—they are totally crazy.”

I meet her and her corgi, Zuzi—an expert beggar and stealer of hearts and fritule—while strolling along the promenade. Within minutes of conversation, she invites me for a drink at a market stand with her friends, a small group of artists, like herself, and musicians.

Among them happens to be Zlatko Petrovic Pajo, one of the organizers of this market for the past three years, and a popular Zagreb busker who’s been performing old-fashioned tunes for the city for the past 30. (He sends me off with a CD from his band, “Kraljevi ulice,” meaning “Kings of the Street,” when I leave.)

“The most important thing about Advent,” he tells me, “is we have reason to hang out with each other, go out meeting people, eating out…” “Drinking!” Seler chimes in.

They demonstrate as much generously, insisting I try a spread of traditional Croatian food they piece together from market stalls. There’s sarma, traditional sour cabbage rolls filled with a crumbly mixture of beef, pork, and veal; fatty sausage stuffed with cheese, one of the markets’ “1,500 kinds,” Pajo says; bučnica, a savory strudel filled with delicate shredded pumpkin and cottage cheese; and makovnjača and orehnjača, tender Christmastime rolled cakes swirled with poppy seed and walnut fillings.

Advent season in Zagreb is “magic,” Pajo says, “it’s really magic.” Gathered with strangers-newly-turned-friends around the table, laughing and feasting while Advent tunes blare in the background, I have to agree.

If You Go: Tips

Where to Go: Advent Highlights

A giant Christmas tree, an Advent wreath, and a bustling marketplace filled with sausages and mulled wine (and photo-friendly fake snow) await in the city’s main square. Little ones can take a joy ride on the Christmas tram.

At Ledeni Park in King Tomislav Square, food and music are plentiful, as always, but the main attraction is the ice rink, where adults and children can rent skates and glide along looping paths through the park.

Twinkling lights transform the romantic Zrinjevac Park into an illuminated winter wonderland, centered around a gazebo—equally decked out in lights—that doubles as a stage. This is Christmas shopping central: rows of kiosks sell handcrafted goods from rakija (fruit brandy) and fig jam to ceramic ornaments and pretty heart-shaped Licitar cookies.

The popular Strossmayer Promenade, in Zagreb’s historic Upper Town, has been lined with traditional food-hawking chalets and hung with Christmas tree-shaped lights for the season; its stunning panoramic views over the city are year-round.

A new addition to Advent this year, festivities and educational programs in Maksimir Park, in collaboration with the Zagreb Zoo, cater to kids and families. Meanwhile, picturesque strolling paths through the trees are made even prettier by Christmas lights.

Tkalciceva Street, a local hot spot for restaurants, pubs, and cafes in Zagreb’s oldest neighborhood, is hosting a series of traditional crafts workshops and demonstrations, along with performances of traditional music.

The morning farmers’ market isn’t technically part of the Advent celebrations, but its colorful spreads of bright oranges and hanging dried figs, and seasonal stands bursting with red poinsettias, vibrant evergreen wreaths, and glittering gold and silver ornaments, are not to be missed.

Amadria Park Capital, a stunning heritage hotel in the heart of Zagreb mere steps away from Advent festivities, is just weeks old. For Advent, a special promotion is offering double rooms for about $173 (€152) per night until Dec. 29, and $124 (€109) per night from Jan. 2–Mar. 31. AmadriaPark.com

The writer was a guest of Croatian National Tourist Board and Zagreb Tourist Board. Flights were provided by Turkish Airlines.