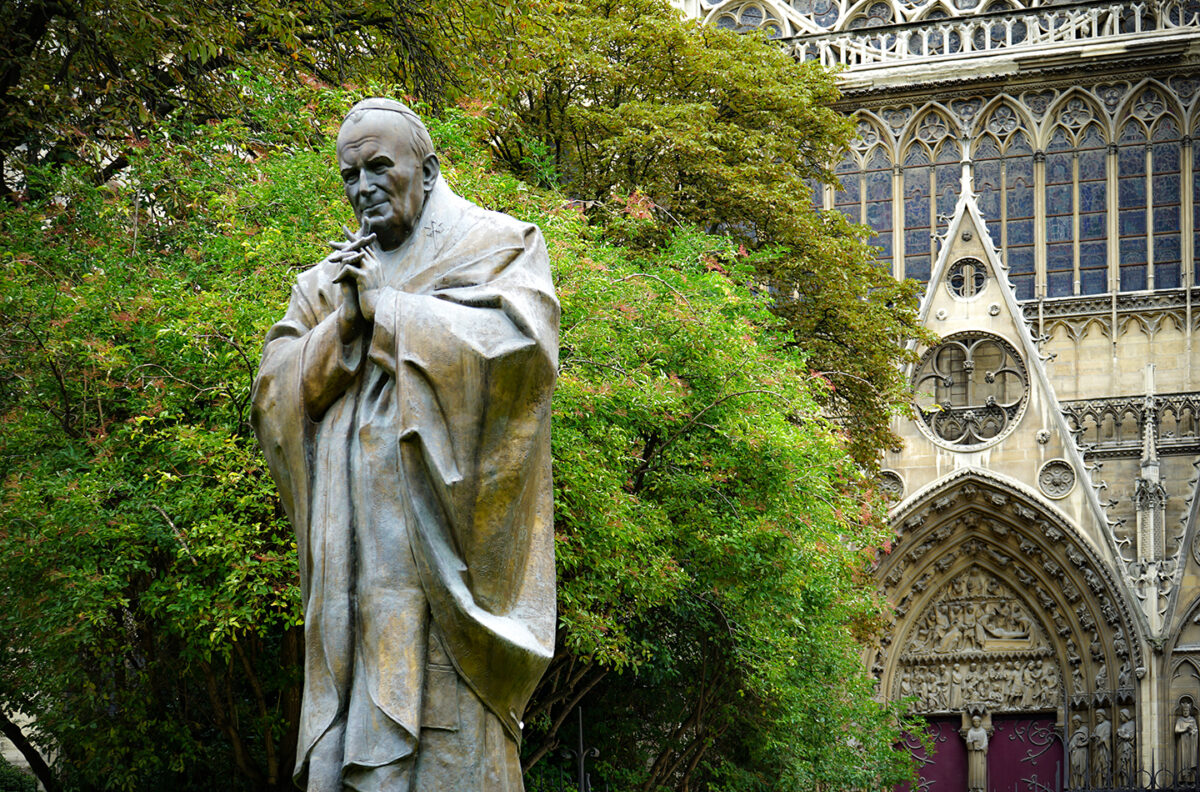 In the Forge: The Making of John Paul II

Karol Wojtyla found his way through the Nazi invasion of Poland
BY Jeff Minick TIMEJuly 27, 2022 PRINT

In his poem “The Truly Great,” Stephen Spender ends with these lines:

The names of those who in their lives fought for life,
Who wore at their hearts the fire’s centre.
Born of the sun, they travelled a short while toward the sun
And left the vivid air signed with their honour.

Those whom we humans credit as having “left the vivid air signed with their honour” come from all sorts of backgrounds, circumstances, and experiences. Theodore Roosevelt, for example, was born into a wealthy family in Manhattan, lived a privileged youth, and entered Harvard University. Margaret Thatcher, an equally adept politician and Great Britain’s first female prime minister, grew up in a small town in Lincolnshire, England, the daughter of a grocer.

Whatever their circumstances, these same heroic figures usually faced battles of their own as they came of age. Roosevelt may have led a silver-spoon childhood, but he was a weak, sickly boy until his father took him in hand and pushed him to excel athletically. This encouragement paid dividends, as even today he is remembered as one of our most energetic of presidents, an explorer, a hunter, a cowboy, and a soldier. As a girl, Thatcher was more serious about school and life than many of her classmates. She pushed herself hard academically, and so displayed early signs of the personality that would later earn her the nickname of “Iron Lady.”

And some of the truly great who “wore at their hearts the fire’s centre” were forged by suffering and loss, shaped and beaten into steel between a hammer and anvil not of their own making.

The Boy and His Father

Karol Jozef Wojtyla (1920–2005), known in boyhood to his family and friends as Lolek, was born in Wadowice, Poland, to Karol and Emilia Wojtyla, the third and last of this couple’s children. An older sister had lived only a few weeks after her birth, and his beloved brother Edmund, a physician, fell ill and died while treating patients for scarlet fever when Lolek was only 12 years old. Meanwhile, his mother had passed away three years earlier of kidney failure and congenital heart disease.

Fortunately, the boy was blessed with an upstanding father, a recently retired noncommissioned officer in the Polish army.

In his massive “Witness to Hope: The Biography of Pope John Paul II,” George Weigel writes: “Karol Wojtyla had many mentors in his youth and adolescence. The most influential of them was his father.”

As Weigel then tells us, his father’s high reputation with his superiors in the army was “based on a combination of intelligence, diligence, dependability, and above all, honesty.” It was the father who passed these virtues to the young Karol and who undoubtedly encouraged his son in his schoolwork—he would graduate as valedictorian of his class—and on the athletic field, where Lolek excelled in soccer. Just as importantly, the elder Wojtyla was a devout Catholic later remembered by his son as “a man of constant prayer.” Father and son regularly read the Bible and prayed the rosary together.

In a short autobiography written years later about these early days and his religious formation, the son wrote of his father: “We never spoke about a vocation to the priesthood, but his example was in a way my first seminary, a kind of domestic seminary.”

Wojtyla graduated high school as a model student and son, an enthusiastic athlete, and a passionate advocate of Polish history and literature. By that time, he had also fallen in love with the theater, where he both acted in plays and participated in poetry recitations. When in 1938 he entered Jagiellonian University in Krakow—he and his father rented a basement apartment, which friends quickly dubbed “the catacombs”—he excelled in his studies of literature and philology while continuing to pursue his theatrical interests.

A year later, the Nazis launched their blitzkrieg into Poland, and Wojtyla’s life, like those of his countrymen, was forever changed.

Once their tanks and troops had rolled across Poland, the Nazis waged a war on Polish culture, intending to erase it. In the case of Jagiellonian University, for instance, where Wojtyla had enrolled for the fall semester, the Germans arrested dozens of deans and professors, shipped them off to concentration camps, and then wrecked the libraries and laboratories. Males between the ages of 14 and 60 were required to have work papers and a job. Like his classmates, Wojtyla was forced to find employment.

One of his acquaintances, Mieczyslaw Malinski, would write of that time: “The police arrested people who were caught walking the streets without passes, and fired at any who did not stop when challenged. We were hungry for five years without a break, and each winter we were desperately cold.”

The Gifts of Adversity and Pain

While Wojtyla daily endured these harsh years of Nazi occupation, forces came into play that would create the man who as priest and bishop would later push back against the postwar communist government of Poland. Along with President Ronald Reagan and Prime Minister Margaret Thatcher, as Pope John Paul II, Wojtyla also helped bring about the fall of the Soviet Union, using talents and skills he had acquired under the Nazi regime.

After a stint as a messenger for a restaurant, Wojtyla began working for the Solvay chemical company, where for almost three years he served as a manual laborer, first in a quarry mining limestone and then in a plant’s water purification system. Toiling alongside workers from a social class largely unfamiliar to him, Wojtyla learned the hearts of many of these men, their aspirations, their views on the urban proletariat, and their care for others. Four decades later, when dockworkers and then others rose to demand a union and to protest their government in Soviet-controlled Poland, the pope heard and understood their cries for freedom and justice.

During these years of fear and oppression, the young man who was so entranced with literature also turned to a new vocation: the priesthood. Two events in particular moved him in this direction. Along with other young Poles, he joined and led a Living Rosary group, which was an underground religious organization founded by a tailor, Jan Tyranowski. With so many priests sent off to camps, where a sizable number of them perished, the Church called on lay leaders to provide solace and guidance for parishioners. Largely self-educated in theology and regarded by many as a mystic, Tyranowski exerted an enormous influence on Wojtyla, guiding him in his reading, particularly in the works of St. John of the Cross, and in his prayer life.

Wojtyla was fortunate to find such a mentor, for in early 1941 he returned from work to find his ailing father dead of heart failure. That death deeply affected the now orphaned son. “I never felt so alone,” he later said, and friends would remember that he began spending hours in prayer offered up not only for his father but also as a means of discernment for his vocation. After nearly a year of such contemplation, he asked to be received into the local seminary. Like his fellow seminarians, he continued to work a job while furtively pursuing his theological studies underground so as to avoid the Gestapo and its efforts to shutter such enterprises.

A Way of Resistance

Of the lessons that Wojtyla learned from Nazi oppression, the third and perhaps the most significant for non-Catholics, and for that matter, for readers who value traditional culture, is the path of resistance selected by Wojtyla.

Many other Poles–men and women, young and old—resisted the Nazis by forming guerrilla outfits or by sabotage. As Weigel points out in “Witness to Hope,” however, Wojtyla and other like-minded friends “deliberately chose the power of resistance through culture, through the power of the word.”

These Polish patriots, most of them quite young, formed what they called the Rhapsodic Theater. They performed plays, some of them original, and offered dramatic readings. They frequently gathered and rehearsed in the Wojtylas’ apartment and often played to small audiences of 30 or fewer people.

And as Weigel reports, near the apartment “they walked past posters announcing an ever-increasing list of executions by firing squads, their virtually certain fate if they had been caught.” Yet they persisted, striving to preserve their culture from extinction.

That defense of culture might serve as an example to us all.

On Oct. 16 of 1978, white smoke appeared above the Sistine Chapel announcing that a new pope had been chosen, and the man who would become the first non-Italian pope stepped to the balcony. Later at his inaugural Mass, this new pope, who had taken the name John Paul II, would declare the words that perhaps summed up his entire life: “Be not afraid.”

Much later, in the summer of 2017, Lech Walesa, who was a co-founder of the trade union Solidarity, a leader in the Polish battles against the nation’s communist government and the Soviet Union, and later president of Poland, delivered an address to some students and faculty at Western Carolina University in Cullowhee, North Carolina, followed by a press conference. Having obtained a press card from the Smoky Mountain News, where I normally wrote book reviews, I attended Walesa’s lecture and the press conference. To my astonishment, both events were sparsely attended, and as one of only two print journalists present, I had the opportunity to ask some questions.

The man who had walked out of the fire had brought light to a darkened world.