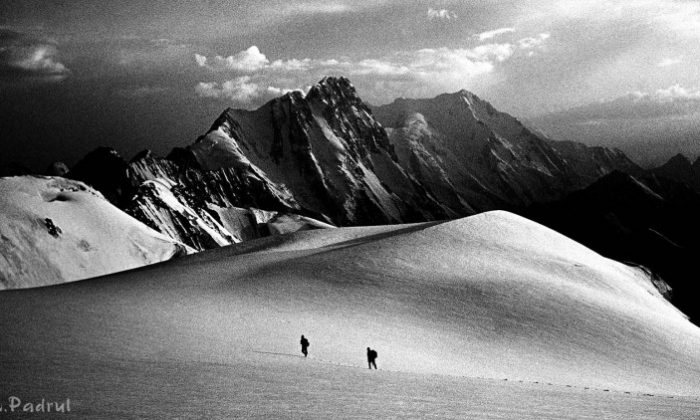 Master photographer Leonid Padrul aims at telling a story with his photographs so that the viewer can feel the place where the image was taken. “The Desert of Yehuda, Israel.” (Leonid Padrul)
Arts & Culture

In the Beginning There Was Light

TEL AVIV—”Without feeling the light in nature, it is not possible to make a good picture,” photographer Leonid Padrul said when I met him in his studio at the Eretz Israel Museum. I had just seen his landscape photographs and the catalogue pictures he took for the museum.

Padrul searches and finds gold. “You not only need to know how to photograph, you also need to feel in your depth how to show the life of the object,” he said.

“It is by chance that what I do and my profession are the same,” Padrul said. He started to photograph in his youth, in the Ukraine, his birth country. He was a sportsman, a cyclist, and a swimmer.

After the military service, he joined a journey to the high mountains of Tien Shan, situated between China and Kyrgyzstan. “It was not a voyage; it was a cartography expedition and everything was planned,” he added.

In spite of the mission’s difficulties, Padrul knew what he was looking for and began a personal documentation. “From time to time, I told the friend to whom I was tied with a rope to stop in order to get the best frame there was,” he said.

“One day I saw for the first time in my life something wonderful—I was standing above a cloud,” he said. “Whenever I saw something interesting that an ordinary person wouldn’t know, I photographed it.”

The physical tests turned out to be a journey toward “the good picture” for Padrul. After walking for hours, he would suddenly see something special. He said that hardships helped him “feel the landscape and connect to nature.” “Facing such huge nature, a person can only find himself inside of it.”

Padrul didn’t feel fear; he only felt the adventure. “Man cannot change nature, particularly in these high mountains. For example, when walking and knowing that the noise one makes can easily provoke a very powerful avalanche on the near mountain, man needs to know his place,” he said.

Since Padrul immigrated to Israel in 1994, he has met with new challenges. Beside the fact that he is the director of the Eretz Israel Museum Photographic Department, he also photographs for National Geographic and conducts a project to help young immigrant photographers in their search for identity.

“Each time I photograph, I want the picture to show an amazing story so others will see it as I saw it. I need to transmit a message and a story from the place I’ve been,” he said.

“I look for the light,” Padrul said. “As a photographer at the museum, when I work on a catalog I build the light. I do it to show the viewers the spectacular things, like in the glass, for example.”

He showed me an image of wine glasses that revealed their interesting angles and said, “The things that the light exposes in this image are things that we cannot usually see with the eye.” He said it’s not just a matter of knowing how to photograph; you need to feel the subject in your depths in order to capture the life of the subject.

He takes out a catalogue, this time of ancient archeological objects: “When I touched these historical tools for the first time, I felt a very interesting thing.”

Until then he had only seen such objects through glass windows in museums. Here, he held them in his hands. “I felt how ancient man had made them several thousand years ago. I held them in my hands, and I searched through the light for the time when man had created them.”

In several exhibits around the world, Padrul presented photographs of the Dead Sea and Jerusalem.

“Now I know at what angle and at what time to photograph in order to be able to show something wonderful.”

As the conversation advanced, I suddenly realized that Padrul doesn’t photograph the landscape to photograph a landscape, nor the glass to photograph a glass. He uses them to express a poetic complexity, something from life. I told him my thoughts, and he smiled.

People feel that there is a difference between his photos and those of others. “They ask me, how did you do it? In fact, I didn’t do anything. I was only in nature and it happened,” he said.

Padrul’s works are on view in Zadar, Croatia, through the arts program “Israel Magic, Zadar Summer,” which runs until July 19.