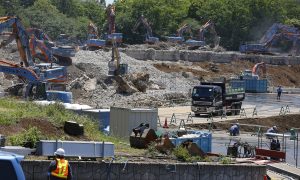 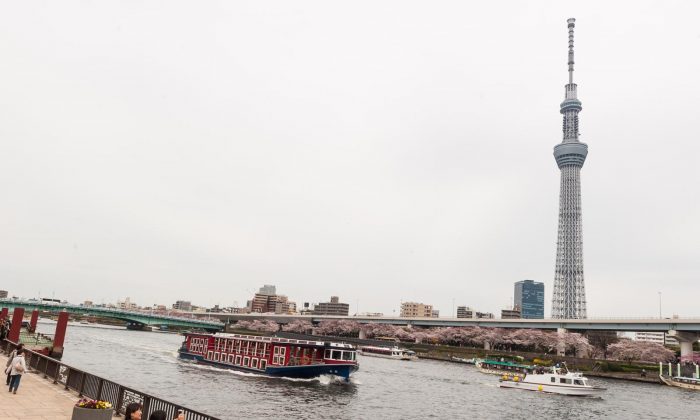 A cruise ship going to Tokyo Bay on Sumida River. The world's tallest tower, Tokyo Sky Tree, can be seen across the river. (By You Peiran/Epoch Times)
Asia & Pacific

Tokyo, the host city of the 2020 Olympics, is already one of the busiest cities in the world. Moreover, the main venue and Olympic Village are situated in Tokyo Bay Zone, where you will find a high concentration of big companies and high-rise residential buildings. During peak commuting hours, the swarms at the nearby subway station Katudoki virtually look like a cinema emptying at the end of a movie. To alleviate the increased traffic congestion anticipated during the Tokyo Olympics, the city is testing the use of cruise ships to provide public transportation.

A cruise ship pier was set up on July 24 next to the Nihonbashi (Japan Bridge) in Chuo-ku, the central district of Tokyo and the cruise route to be in operation during the Olympic Games, which runs from Nihonbashi in Chuo-ku to Harumi in Tokyo Bay. The first ship of the day is set to leave the pier at 7:30 a.m., and the ships are to be dispatched every 15 minutes, with eight ships operating during morning rush hours and eight during afternoon rush hours.

At a speed of 13.7 miles (22 kilometers) per hour, it takes about 30 minutes for the ship to travel between Nihonbashi and Harumi, twice the time needed on the subway.

Although much slower than the subway, the cruise ships would be spacious and less crowded. In addition, going through the canal toward Tokyo Bay, passengers get to see a number of renowned landmarks including Tokyo Sky Tree, a 634-meter broadcasting and observation tower. It would be a unique sightseeing route for visitors from other countries.

TV Tokyo collected feedback from some Tokyo residents who regularly take the subway to go to work. Many showed great interest in the cruise ships as a means of public transportation.

“In summer, I always have to go to work very early to avoid the crowds on subway trains. It is a great idea to commute by cruise ships. We really need it,” one of the interviewees said.

“I would love to take the cruise ship because I can appreciate the beauty of Tokyo from a fresh angle during the commute to and from work.”

“If the cost is within 150 percent of the subway, I think it is acceptable.”

There were also a number of people who don’t think it is a practical method.

“It is not very convenient to walk to the pier,” one person pointed out.

During the test operation from July 24 to Aug. 2, passengers can ride the cruise ships free of charge, but need to make an appointment ahead of time.

After the test period, cruise ride fees will be calculated based on recovering the basic cost of running the ships. If the test run is successful, cruise ships will serve passengers during the 2020 Olympics, and may become a permanent addition to Tokyo’s public transportation after the Games are over.

Epoch Times reporter You Peiran contributed to this report.