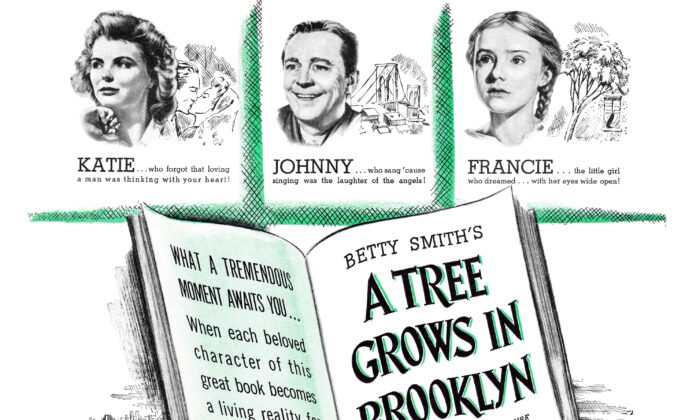 An ad in Life Magazine for the film “A Tree Grows in Brooklyn,” a work which shows the strength of women but also their need for a womanly heart. (Public Domain)
Performing Arts

In Praise of Womanhood: A Look at Hollywood Wives and Mothers

A friend recently contacted me about the movie “Birds of Prey.” She’d read a review of the movie in The Epoch Times and was as appalled as the reviewer by the violence of a movie aimed at a young female audience. My friend wrote of older Hollywood films: “If a woman had to be strong (say her husband was at war), she did so displaying all of men’s best traits: honor, integrity, self-sacrifice. Here (that is, in “Birds of Prey”), the criminal violence of women is applauded.”

She added that we’ve gotten to the point where female characters in the movies must be as hardened and as violent as males, “which is no credit to women any more than it is to men.”

My friend has a point.

Since the 1960s, our culture has encouraged women to become more like men in their competitive drive, toughness, and work ethic outside the home. Unfortunately, “women’s liberation” has also come to mean not only the right of women to enter the workforce, the universities, and the professions, but also liberation from the family and the home, and even from femininity itself.

Many of today’s Hollywood films celebrate women who succeed as professionals, politicians, and athletes, which is generally to the good. Much less attention is given to those women, like so many I know, who follow the traditional pathway of mother and wife, who give their hearts and minds to raising children and making a home, and who display the same sense of duty and integrity as any man I know, but with a womanly twist.

This was not always the case.

From 1930 to 1970, actresses like Katharine Hepburn, Loretta Young, Lauren Bacall, Audrey Hepburn, and Bette Davis played strong women on the big screen, heroines who stood up for themselves and others without behaving like men.

In “A Tree Grows in Brooklyn,” for example, wife and mother Katie Nolan (Dorothy McGuire) raises her daughter and son while also helping earn enough money to pay for rent and food. Her husband, Johnny, a singing waiter and an alcoholic, barely manages to scrap together money to support the family, and so the intrepid Katie helps put food on the table.

When Katie turns against her sister for her wild ways, their mother says to her: “You have forgotten to think with your heart. There is a coldness growing in you, Katie.” She is reminding her daughter to be charitable and to feel the emotions of womanhood.

“Gone With the Wind” focuses on Scarlett O’Hara (Vivien Leigh) as she ruthlessly battles for money and power in the years following the Civil War. Scarlett steals away her sister’s fiancé and marries him for his money. She becomes sharp and tough as any man in matters of finance.

In stark contrast to Scarlett stands her friend Melanie (Olivia de Havilland), a woman endowed with a different courage and grit who practices such virtues as kindness, loyalty, and mercy. Even when others inform her that her husband, Ashley, was seen embracing Scarlett, who spends much of the movie in love with Ashley, Melanie brushes those accusations aside and continues her friendship. In adhering to virtue, Melanie serves as an example of female goodness to those around her.

In the popular Christmas movie “It’s a Wonderful Life,” Mary Bailey (Donna Reed) is the gentle, patient, and loving wife of George (Jimmy Stewart), but she becomes a lioness when she must protect him. When the evil Mr. Potter absconds with some of George’s money needed to set his accounts straight, it’s Mary who leaves her home and appeals to George’s friends and clients for help, and so rescues him from financial ruin.

Though many more movies today than in the past depict women as superheroes, soldiers, professionals like doctors and lawyers, or outspoken champions of some political cause, some writers and directors have produced films featuring wives and mothers as exemplars of virtue and strength.

In “Tender Mercies,” Rosa Lee (Tess Harper) is a young widow whose husband has died in Vietnam, leaving her to support herself and her young son by operating a gas station and a run-down motel in rural Texas. The movie begins when she agrees to employ Mac Sledge (Robert Duvall), a broken-down, penniless alcoholic who was formerly a star in the world of country music, on the condition that he’ll give up the bottle.

As Rosa Lee and Mac become friends, they grow closer and eventually wed. Through all of Mac’s struggles both before and after their wedding—a failed attempt to sell a song, his battles with his ex-wife, the death of his daughter—Rosa Lee acts as his spiritual guide, often in such an understated way that some in the audience may miss her attempts to protect and love him.

“We Were Soldiers” tells the story of Colonel Hal Moore (Mel Gibson) and the battalion he led against North Vietnamese forces in 1965 in the Ia Drang Valley. Before his departure for overseas duty, the film introduces us to his wife, Julia (Madeleine Stowe), a mother of five who clearly loves her husband.

In his absence, Julia organizes a group of base wives, and a tender scene of one of their meetings shows us women who are proud to be mothers and wives, making the best of their long separation from their husbands.

And when notifications of the deaths of some of these men begin arriving via a cab service, it is Julia who nobly steps up, orders the cab driver to bring the telegrams to her, and takes them in person to her neighbors and friends. Here, Hollywood gives us a wife and mother who is as noble and virtuous as any ancient Roman matron.

Ron Howard’s “Cinderella Man” gives us Russell Crowe as heavyweight boxer James J. Braddock and Renée Zellweger as his wife, Mae. It’s the depths of the Great Depression, the Braddocks are stone-broke, and then Jim gets a chance to return to the ring. Mae is upset—she doesn’t want to see him hurt again—and she storms off to the apartment of Joe Gould (Paul Giamatti), Braddock’s promoter and trainer, to confront him.

There, she discovers that Gould and his wife have sold all their furniture, in part to help pay for Jim’s training. At one point, Mrs. Gould sends her husband out of the room, and the two women have this conversation about their husbands:

Mrs. Gould: “Can you ever stop yours? When he sets his mind to a thing?”

Mrs. Gould: “See, I never know who it’s harder on—them or us. We have to wait for them to fix everything. And every day … they feel like they’re failing us. Really, it’s just the world that’s failed, you know.”

That dialogue may be politically incorrect by today’s standards, but the few words spoken by these two women—it’s almost impossible to imagine a similar dialogue between two husbands—deepen our understanding of the love and pity they feel for the men they love in this time of economic hardship.

For the past three or four decades, some in our culture have worked to erode the boundaries between male and female. They’ve told us we need to make our boys more like girls and our girls more like boys. They’ve replaced biological sex with gender identification, meaning we can choose whatever sexual persona we wish.

Movies like “Birds of Prey” further blur these distinctions.

In part, this social engineering explains the mess and chaos of our current culture. Those who are attempting to drastically alter human nature must shoulder some of the blame for the weakened state of marriage and family life in our nation, and for the confusion and mayhem that so often plagues our relationships.

Hollywood deserves some of the blame for this decline in standards, but the truth is that we all bear some responsibility for the turn we have taken and some obligation, however small, to reverse it.

We might begin that reversal by celebrating the differences between men and women rather than trying to delete them.

Consider the virtues. These moral linchpins of life—courage, temperance, charity, and all the others—are the common property of both sexes. The difference lies in how men and women pursue and practice those virtues.

Allow me a personal example. When my wife died in 2004, some male friends offered assistance, mostly financial, but it was the women, mostly the mothers of my students, who stepped up to help me through a terrible time. They provided free childcare for my 9-year-old son, they delivered meals on a regular basis to my home and classroom for the next six months, and they frequently telephoned or sent notes to encourage me. Without the kindness, generosity, counsel, and tender mercies of those women, that year would have gone much worse for me and my son than it did.

Women, let me tell you something you already know: Our culture doesn’t need you to become good men. Our culture needs you to be good women.

I’ll close by saluting all of you, good men and good women, for the gifts you bring to a broken world.