In Montreal, Shen Yun Seen as a ‘Message of Love’ 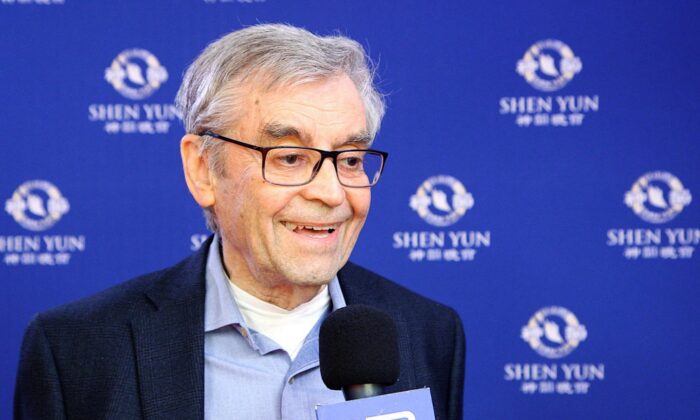 MONTREAL—The path between men’s hearts and heaven is often a winding one. For octogenarian Henri Abran of Quebec, a former French professor, atheism took over when belief gave out more than once in his long life, but faith and love won in the end. And it’s that set of higher values that Abran now says is “fundamental, crucial, for the future of humanity,” and what he was grateful to have witnessed in Shen Yun Performing Arts.

I perceive all the various messages of hope that [Shen Yun] is transmitting: the message of faith, the message of love, and that’s extremely valuable in our contemporary world.
— Henri Abran of Quebec

“On this earth, you kind of don’t have a choice. You have to be either an atheist or a believer. I was once an atheist, I was once a believer, I was once an atheist again, and now I’m a believer. I’m near the end of my life, I’m over 80 years old. And I perceive all the various messages of hope that [Shen Yun] is transmitting: the message of faith, the message of love, and that’s extremely valuable in our contemporary world, where those values are neglected. And that’s unfortunate,” said Abran, who attended the performance with his wife at Montreal’s Place des Arts on Jan. 3, 2020.

New York-based Shen Yun takes as its mission the revival of China’s authentic traditional culture, a society inextricably woven with spiritual beliefs and disciplines such as Buddhism, Taoism, and Confucianism.

According to Shen Yun’s website, “Throughout history, almost every culture looked toward the divine for inspiration. … Today, Shen Yun’s artists—dancers, musicians, choreographers, composers, and the entire team—follow this noble tradition. For them, this spiritual connection is motivation for striving to excel. … Their source of inspiration, rooted in traditional Chinese culture, is the spiritual discipline known as Falun Dafa.”

“Sublime. Sublime. Extraordinary. Wonderful. And when we look back 4 or 5,000 years, we see that the Chinese civilization is so rich and so different from what we usually see, hear, read about in what’s happening now.

“We usually consider, among other things, that in China, as in India, and in Asia in general, these old civilizations over there to be extremely profound religious cultures. And that it would be in our interest, for us Westerners, to learn more about and to deepen our understanding of them.

“I had wanted to come and see Shen Yun for years, but I had to convince my wife, as she was skeptical—until the moment [we] went in and started to see the show, and she came out very enthusiastic,” Abran said.

“The spiritual side has touched me deeply. And the music is extraordinary as well. This kind of fusion between Chinese music and Western music, and it’s very well presented, and the orchestra is wonderful,” he added.

Abran’s final thought returned to how critical it is to restore hope and faith to the world and the way in which Shen Yun achieves that in the last dance of the program.

“That’s where you see all these religions coming together in a final message of love,” he said.