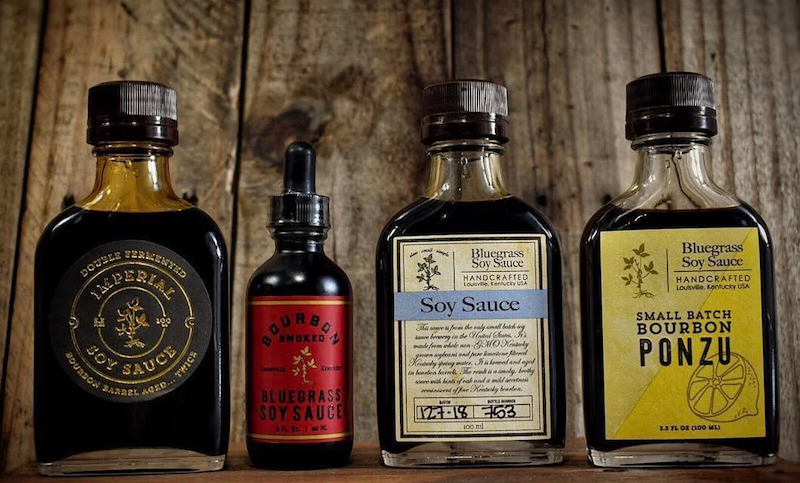 The line of soy sauces from Bourbon Barrel Foods.
Food

In Kentucky, Bourbon Barrels Get a Second Life at Soy Sauce Microbrewery

LOUISVILLE, Kentucky—In Kentucky, bourbon is king. The barrels used to make bourbon can only be used once, so in their next lives, they are sometimes enlisted for other purposes, such as making furniture. But their most unique use by far might just be soy sauce brewing.

At Bourbon Barrel Foods, Matt Jamie runs the only soy sauce microbrewery in the United States, out of a warehouse in the up-and-coming Butchertown neighborhood of Louisville. Ingredients are sourced locally: limestone-filtered water from Bardstown (the same as that famous water used for bourbon), soft red winter wheat, and non-GMO soybeans from nearby farms. The Bluegrass Soy Sauce—so-named after Kentucky, the Bluegrass State—is the original product, aged for a year, produced in small batches, totaling about 4,000 gallons a year.

If you’ve ever had fermented soybeans—perhaps with cooked rice—you’ll know they have a deep umami taste that mass-produced soy sauce just doesn’t have. Jamie’s well-received Bluegrass Soy Sauce, however, has similar layers of umami flavors.

Looking to experiment more, this past May, Jamie released three new products, inspired by a trip to Japan: double fermented, bourbon-smoked, and bourbon ponzu soy sauces.

The Imperial Double-Fermented soy sauce is phenomenal—potent and full-bodied, with hints of coffee, dark chocolate, even; a few drops are all you need. Jamie recommends having it on soft-boiled eggs; or making a compound butter with a few drops, to top a steak. I tried a tiny amount with hard-boiled eggs. It made everything right with the world. Much like very fine olive oil, it’s soy sauce you use as a finishing touch, rather than for cooking.

Then there’s the bourbon smoked soy sauce, made by using bourbon barrel staves. There are about 200 indicators of flavors to soy sauce, Jamie said, but his 13-year-old probably said it best last year when she first tried it: “It tastes just like country ham.” If you haven’t had country ham, imagine instead a supercharged, bacon-y soy sauce. Its packaging—a bottle with a dropper—hints at how intense it is.

Finally, there’s the Bourbon Ponzu. In Japan, ponzu is the citrus of choice, but here in the United States, Jamie opted to use lemons. Made with the Bluegrass soy sauce, lemon, rice wine vinegar, bonito flakes, and bourbon (instead of the traditional sake), it has an excellent balance. Jamie said, “It hits me on the side of the tongue—the sour side.” It can be used for dipping dumplings, marinating meat or seafood, or dressing cold noodles.

If you are in Louisville, the studio kitchen in Butchertown accommodates special events and tastings, and there is a retail store on Frankfort Avenue. The soy sauces can also be purchased online at BourbonBarrelfoods.com ($8–15 for a 3.3-ounce bottle). The company also makes bourbon-smoked spices, such as a much-raved-about bourbon-smoked paprika.