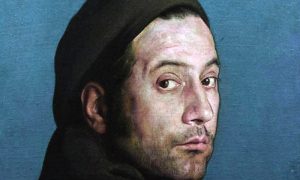 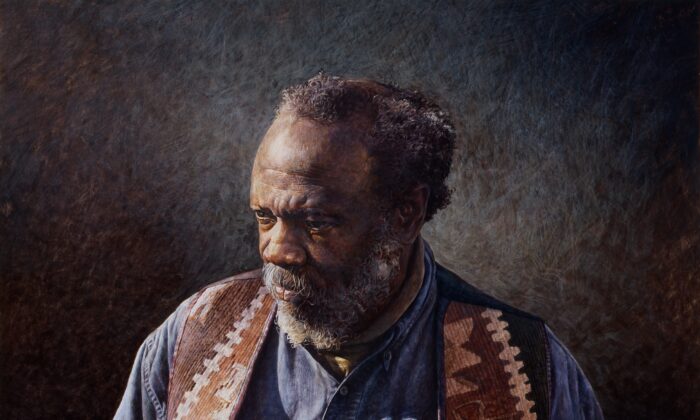 In Earnest: Egg Tempera and the Essence of Painting

In the painting, Charles gazes intently, directly across to the left of the painting. At first glance, he appears sad, but a closer look at his furrowed brow reveals a man deep in thought. Miller has rendered Charles’s expression in such brilliant detail that just those few facial features evoke a curiosity as to just who Charles is.

Everything in Miller’s portrait has been carefully rendered to create such a curiosity. For Miller, the subject is the most important aspect of the painting, he said by email.

For over 45 years, Miller has been painting in Spokane, Washington, specializing in both watercolor and egg tempera paintings, according to his website. He’s been teaching students both mediums for nearly as long—in Spokane and around the world.

As a boy, Miller was particularly inspired by his brother’s artistic talent, and he vividly remembers a family trip to Wisconsin, at age 8 or 9, to see his father’s friend, the watercolorist Randy Penner.

As a junior high school student, Miller wished for a future career as an artist. He even wrote a career paper on the subject, but he didn’t quite believe it was possible.

For the past four decades, he’s been living that dream—exhibiting his paintings worldwide to much acclaim.

The Wonder of Egg Tempera

Miller began experimenting with egg tempera (dry pigment and egg yolk) in the mid-1970s. He’d been inspired by the works and techniques of Andrew Wyeth, his favorite American painter, and by the mixed media paintings of Wyeth’s son, Jamie, at the Brandywine River Museum of Art in Chadds Ford, Pennsylvania.

He found the Wyeths’ egg tempera paintings fascinating. If it hadn’t been for their paintings, he wouldn’t have touched egg tempera. “There was a uniqueness, a mystery as to just what the medium was. … They kind of looked like oil paintings, but thinner. They had characteristics of watercolor, but not as wet,” he said.

Miller now sees egg tempera as a medium between oil and watercolor. Egg tempera paintings present a semi-glossy, tacky surface, one that’s extremely tempting to touch, he said. And he also enjoys the depths that egg tempera brings to a painting; it has a three-dimensional aspect that he rarely sees in oil or watercolor paintings.

Miller believes that painting with egg tempera is like writing a novel, while working in watercolor is similar to writing a short story or even a poem.

An egg tempera painting takes him 10 to 20 times longer than a watercolor painting of the same size. “I have to be much more patient when working in egg tempera; certain stages can become extremely tedious,” he said.

To paint with egg tempera requires many thin, but not watery, paint layers—sometimes as many as 10 or 20 layers, Miller explained. He likens the process to varnishing a piece of wood 10 times instead of once.

For those students interested in learning, he directs them to his YouTube video explaining the basic egg tempera process he uses in his paintings.

The Essential Art of Painting

“Learning to handle the medium is craft, not art,” Miller said. He believes the art of painting centers on the subject matter and how the artist chooses to portray the subject.

“As in writing, it’s not [the] writing style alone that makes a great writer, contrary to what many think. Rather, it’s the subject, how we handle the subject, the originality of the subject, the mood, and the big and most important principle: editing—emphasis and de-emphasis within the story—this is the art of writing and painting,” he said.

Miller explains that Ernest Hemingway put extreme importance on editing to get to the heart of a subject; painting is no different. The color, medium, and technique are secondary to the subject matter portrayed.

In essence, “What does the subject have to say to us, the world?” he said.

To find out more about Stan Miller’s art, visit StanMiller.net