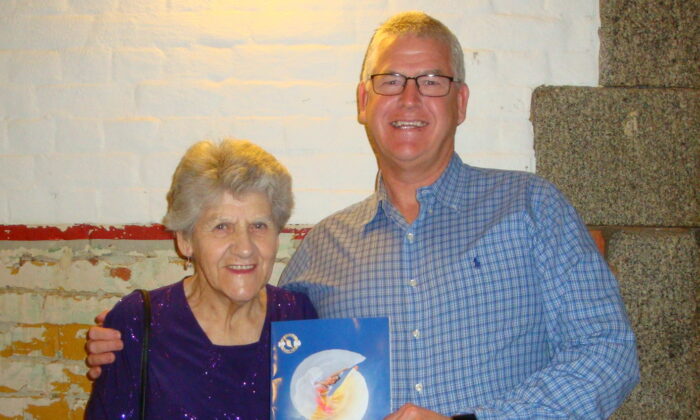 BENDIGO, Australia—Seeing the happy smile of a family member on their birthday is something quite meaningful and fulfilling to many people, and that is why Dean Lovett, a branch manager, decided to take his 81-year-old mother, Elva Lovett, to see Shen Yun Performing Arts at Bendigo’s Ulumbarra Theatre on April 30.

Dean Lovet—who works at Stramit, a leading building products manufacturer in Australia—and his sister spent time researching Shen Yun before buying their beloved mother a ticket, believing she would like the show.

However, things turned out better than expected as Ms. Lovett loved Shen Yun and her family’s thoughtful gesture.

“Absolutely fantastic, absolutely wonderful. I couldn’t think of anything nicer,” Ms. Lovett, who drove two and a half hours to Bendigo, said. “It was a wonderful experience, something that I really will never forget.”

Agreeing with his mother, Mr. Lovet said the whole performance resonated with him. He congratulated Shen Yun’s dancers and musicians for a fantastic evening.

“They’ve done absolutely fantastic,” he said. “The whole thing is just in harmony with each other.”

Mr. Lovet was impressed most by the colors and timing of the piece called “Water Sleeves” where the female dancers leapt across the stage showcasing long-sleeved dresses.

“That was the nicest part for me,” he said. “The coordination was unbelievable. I couldn’t pick a fault.”

He also resonated with one story that portrayed the busy and hectic modern life, with people ignoring each other while being absorbed on their mobile phones. Mr. Lovet then suggested that everyone learn to slow down, listen, and pay attention to other people.

Mr. Lovet did not know a lot about Chinese culture before coming to see Shen Yun. However, the performance opened his mind to the rich and profound stories inspired by China’s 5,000 years of civilization, which the New York-based performing art group is on a mission to revive after it was largely destroyed under China’s communist regime.

“I walked away today feeling like I know a lot more,” he said. “We came along to see a show, but I’m leaving feeling a lot wiser.”

He encouraged Shen Yun’s performers to keep strong with the traditions and continue their efforts so that more people can learn about true Chinese culture.

Ms. Lovet shared a similar view with her son, saying that it was wonderful for Shen Yun to use music to bring people together and help them learn new things.

“Like my son, I’ve learnt a lot more than I knew about the culture before,” she said.

Apart from telling historical stories, Shen Yun also depicts modern issues in today’s China, including the suppression of traditional beliefs and faiths by the atheistic communist regime. From the performance, Mr. Lovet learned about the ongoing persecution of Falun Gong, a Chinese spiritual mediation practice.

“To know what is going on in the world, I think that is a good learning experience,” he said.

The piece about the persecution made him realize that people should cherish more the little things in life that they normally take for granted because those things may be taken away by others.

“I work quite a fair bit. So [I am] just looking at slowing up a bit and enjoying life a lot more and just appreciating the little things,” he said.

He said it was his hope that we call can open our eyes to what is going on around us, learn from the past to avoid repeating mistakes, and live in harmony, regardless of our cultural backgrounds.

“I think it’s important that everybody learns to live together,” he said.