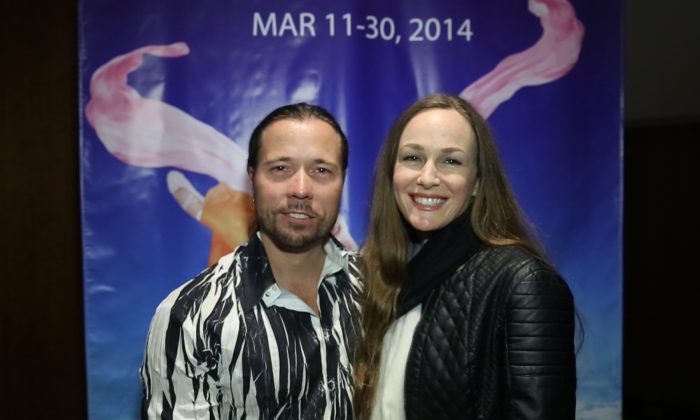 Ms. Powell is a classically trained vocalist, songwriter, and has been in the music and entertainment industries for over 19 years. She is also a visual artist, and a Reiki Master.

Ms. Powell recounted that she saw the Shen Yun billboard on her commute to work every day, and subsequently her husband decided to surprise her with tickets to the performance.

“We just loved it! We had incredible seats, right in the middle and up front, and I feel really blessed and lucky to have been able to see that. Incredible cultural and entertaining experience. I loved it.” she said.

Independent and nonprofit, New York-based Shen Yun was established in 2006 by artists from around the world with the mission of reviving China’s divinely inspired traditional Chinese culture, which had nearly been completely destroyed by the current regime in China over the last several decades.

Ms. Powell was elated by the effect of classical Chinese dance. “I feel like I’m floating. Floating on air! That’s how the dancers looked. They just looked like they glided on stage, and just floated. It was beautiful, absolutely gorgeous,” she said.

At the core of a Shen Yun performance is Chinese dance, which is “known for its incredible flips and spins, and its gentle elegance, it is one of the most rigorous and expressive art forms in the world,” the website explains. “Art was meant to uplift, bringing joy to both the people who created and experienced it. It is this principle that drives Shen Yun performers and their art,” the website explains further.

Each piece, whether classical Chinese, folk, or ethnic dance, includes different costumes. “Every costume in a Shen Yun performance is presented with brilliant colors, displaying a splendid spectacle,” according to the website.

“And all the costumes, and the color,” said Ms. Powell. “Really loved it.”

Ms. Powell was enchanted by the music. “The music was amazing,” she said. “It was amazing to see, or hear the Eastern instruments mixed in with the Western instruments, and it blended beautifully, and I loved it. I loved every bit of it really.”

“I’m inspired now,” she added. “It makes me feel alive and feel good.”

According to the website, “The Shen Yun Orchestra combines the spirit, beauty, and distinctiveness of Chinese music with the precision, power, and grandeur of the Western symphony orchestra. The result—two great traditions producing one refreshing sound.”

Ms. Powell said she was especially touched by the spiritual values shared in the performance.

“That was amazing how that was woven in, and also, it was the theme of the entire performance, and that, above all, was incredible. I loved that aspect of it, and I think that we need to be more aware and more conscious in our daily lives, and I think that we’re being shown something beautiful and unusual, at least to the Western culture, but also something very important and necessary in these times that we’re living in now, especially now, more than ever,” she said.

“I think because there is so much potential chaos, at any given moment on the planet, and we need those reminders that we are connected to a higher source, that we are of a higher realm, that we’re spirit beings having a human experience, and I just think that’s so important for us to be cognizant of. On a daily basis, on a moment-to-moment basis, if we can remember to be conscious and aware of our divine presence and connection to creator source at all times, then we really could live in a beautiful world that’s depicted through this show,” Ms. Powell further explained.

Mr. Gapinski appreciated the story of Chinese history that Shen Yun was delivering in a “very graceful way,” he said. “It was like [taking] a really great journey.”

He also found some deeper meanings in the performance, through the display of China’s ancient culture.

“Sometimes you forget in our world these days about the values, what the different histories try to, these days even, try to deliver, to bring it over to these days. It’s a beautiful and great reminder, especially I like the messages in the music and the songs. If you read the subtitles, it’s just reminding you what it’s really all about in life. It was really impressive,” he said.

“I think [the message] is just reminding you to care about others, and their point of views, their point of living, and take a part from it, and try even to deliver it and spread the words.”

Mr. Gapinski said he had a great time and would be interested in returning to see Shen Yun’s new productions.