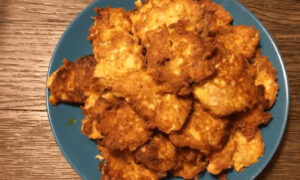 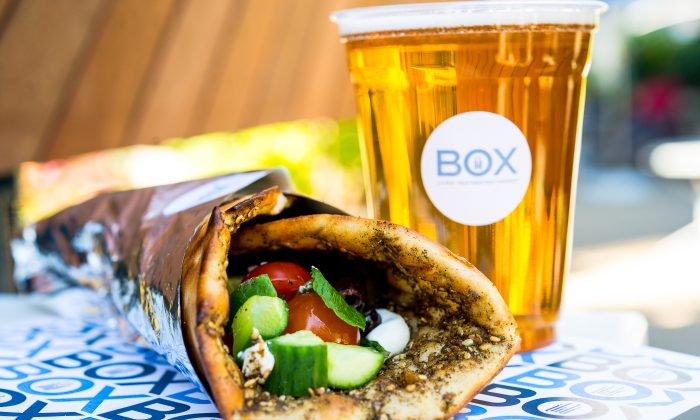 When chef Philippe Massoud was a child growing up in civil war-torn Lebanon, getting to one of the comfort foods of his youth, a pressed chicken sandwich, was a dangerous affair.

“I had to dodge bombs,” he said. He had to wait for ceasefires to be able to travel cross-town.

New Yorkers won’t have to go through such obstacles to have a go at his pressed chicken sandwich—but it is worth the trip nonetheless.

The chef at the popular Lebanese-inspired, Mediterranean restaurant ilili in the Flatiron has just opened a new outdoor kiosk, ilili Box, set in the pedestrian plaza at Broadway between 24th and 25th streets, right next to Madison Square Park. ilili means “tell me” in colloquial Arabic.

The pressed chicken ($9) looks simple, but is full of flavor—the sumac-seasoned pulled chicken is served in a pita with homemade pickled Persian cucumbers and garlic whip. It is pressed in a panini maker, giving it a nice crunch. Get yourself a green lemonade ($4) with mint, ginger, and cucumber, and you have an eye-opening experience. It’s that good.

ilili Box offers some items not available at the restaurant, besides the pressed chicken sandwich. The lamb pastrami sandwich ($12), which was one of the two foods his aunt in the U.S. told him he had to try when he was a youth (the other was a bagel); Mexican- and Korean-inspired falafel sandwiches ($10) (in homage to his staff); the butterscotch panna cotta ($5); and the red lemonade ($5), made with mandarin, blood orange, cilantro, and basil.

It’s been a few years in the making. In 2010, Massoud won a bid to operate a kiosk in a competition organized by the Flatiron/23rd Street Partnership Business Improvement District (BID) and the Department of Transportation; portions of the revenues will go to the BID to continue improving the area.

It’s a win-win relationship, Massoud said, recalling earlier days. When he opened his successful restaurant ilili, people told him that he was crazy and that he would fail. That was in 2006.

Massoud took time to study the area, and found the Flatiron shaped like a valley. He didn’t want to be a polluter and add to the fumes by using diesel-based energy.

It took a year to get electricity from Con Edison. Not easy when you’re in the middle of a pedestrian plaza. “We’re like a boat that docks in a port.”

His ecological bent goes all the way back to his childhood, when his first job was being a gardener. It was important for him to have the least negative impact possible.

The idea of offering fast food of high quality in a casual setting has been on his mind at least since he was 19, when he was a student at Cornell.

“Why not elevate what’s considered un-elevated?” he said.