‘If This Is the Real China, Then It Needs to Be Seen,’ Company Director Says of Shen Yun 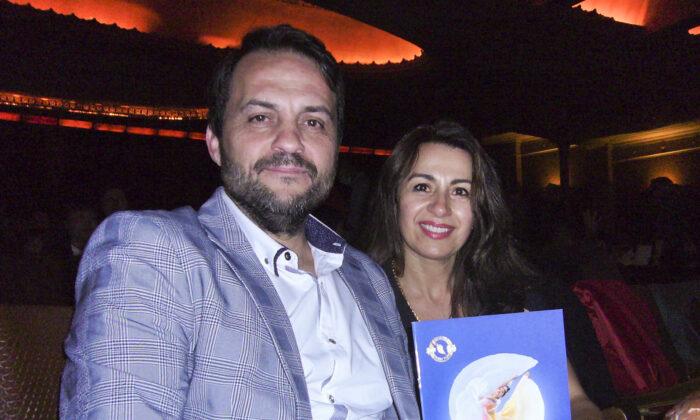 MELBOURNE, Australia—Carlos Barrocas and his wife, Janetta Barrocas, saw Shen Yun Performing Arts for the first time at the Palais Theatre on April 23, after which Mr. Barrocas remarked, “If this is the real China, then it needs to be seen.”

Mr. Barrocas is the director of Freezo, a company that manufactures soft serve ice cream. His wife is an accountant for the company.

New York-based Shen Yun is the world’s premier classical Chinese dance and music company with a mission to revive China’s 5,000 years of divinely-inspired culture, which has been all but lost under decades of communist rule. This year, Shen Yun declares it is presenting “China before communism.”

“It’s fantastic, very colourful, very traditional, which is nice to see,” Mr. Barrocas said of the overall performance. “It’s high tempo, what we enjoy about it is that there’s a little bit of comedy and a funny side to [the performances].”

Mrs. Barrocas concurred. “I like the humour, I like the funny side to it, it breaks the ice.”

“You feel the tradition and you feel the realness of the show, which is nice to see,” Mr. Barrocas also said, referring to the classical Chinese dance and the costumes.

Classical Chinese dance is at the heart of the Shen Yun performance. It is one of the most athletic and expressive art forms in the world.

According to the company, dancers’ costumes and colours are true to traditional aesthetics and styles.

“Legend has it that ancient Chinese clothing was inspired by the attire worn in the heavens,” the company states on its website. “Shen Yun’s costumes bring back the styles of China’s different dynasties, regions, and ethnic groups.”

“I just love that everything sort of flows,” Mrs. Barrocas said of the dancers. “The ladies all do it so beautifully together and the men as well. The men are so strong and powerful and the ladies are like delicate flowers.”

According to the company‘s website, theatregoers “will be taken on a journey to magnificent eras in Chinese history, as well as to periods from China’s recent past.”

Shen Yun’s artistic team has been bringing stories related to the persecution of Falun Dafa practitioners in China. The Chinese Communist Party (CCP) in 1999 launched a nationwide persecution against millions of people who practice Falun Dafa, also called Falun Gong. Falun Dafa is an ancient spiritual practice that is based on the principles of truthfulness, compassion, and tolerance. But while the persecution persists more than 20 years later, these spiritual seekers persevere in their faith.

“It’s sad that you can’t live out your beliefs and you’re oppressed and held back,” Mr. Barrocas remarked after seeing the story-based dances that depict the persecution. “I think that’s why the show is making such big headways and big headlines is because people want to see this. They want to know what’s really going on. And it is saddening for us, we’re Christians and we believe that if that’s their faith, then that’s what they should be able to live out, for sure.”

Abhay Gupta, who is a doctor at St Vincent’s Hospital Melbourne, together with his sister, surprised his parents with tickets to see Shen Yun this year.

Dipika Gupta, his mother, shared: “We booked ourselves, me and my husband, about two years ago. Unfortunately, because of COVID it didn’t [happen] and we were very sad, super sad. This year, our kids, my son and my daughter bought the tickets and they didn’t tell us, it’s a surprise gift for us.”

“The whole family is here and we just thoroughly, thoroughly, enjoyed it,” she said. “Absolutely beautiful. The culture, the costume, music, orchestra, my god, it’s just amazing. It’s just beautiful.”

“I thoroughly enjoyed the music,” she added. “[The music] was fluid, it was just amazing. The atmosphere was awesome, it was just beautiful.”

Shen Yun has a live orchestra that combines the grandeur of a Western symphony with the distinct, soul-stirring sound of Chinese instruments, capturing the essence of both East and West. This is what makes Shen Yun’s music unique and is a new frontier in classical music, the company says.

Her son, Mr. Gupta, remarked, “The music works so perfectly with all the pieces. It’s very impressive.”

“Everyone was perfectly coordinated,” he said of the dancers.

He also noted that hope was a key message he felt during the performance. He said that during certain story-based dances, “[i]t’s really important to see that sometimes when the struggles came, that the communities work together.”

Spiritual cultivation practices, including Buddhism and Taoism, were central to Chinese society for thousands of years. People abided by principles such as benevolence and justice, and propriety and wisdom. They paid respect to the heavens and credited aspects of the Chinese culture, including music, medicine, couture, and more, to the divine.

Mr. Gupta said he sensed a spiritual message in the performance. He said he noticed a heavenly figure throughout the performance who was “coming through in times of crisis and saving and uniting the people.”

“That was a great message there,” he said.