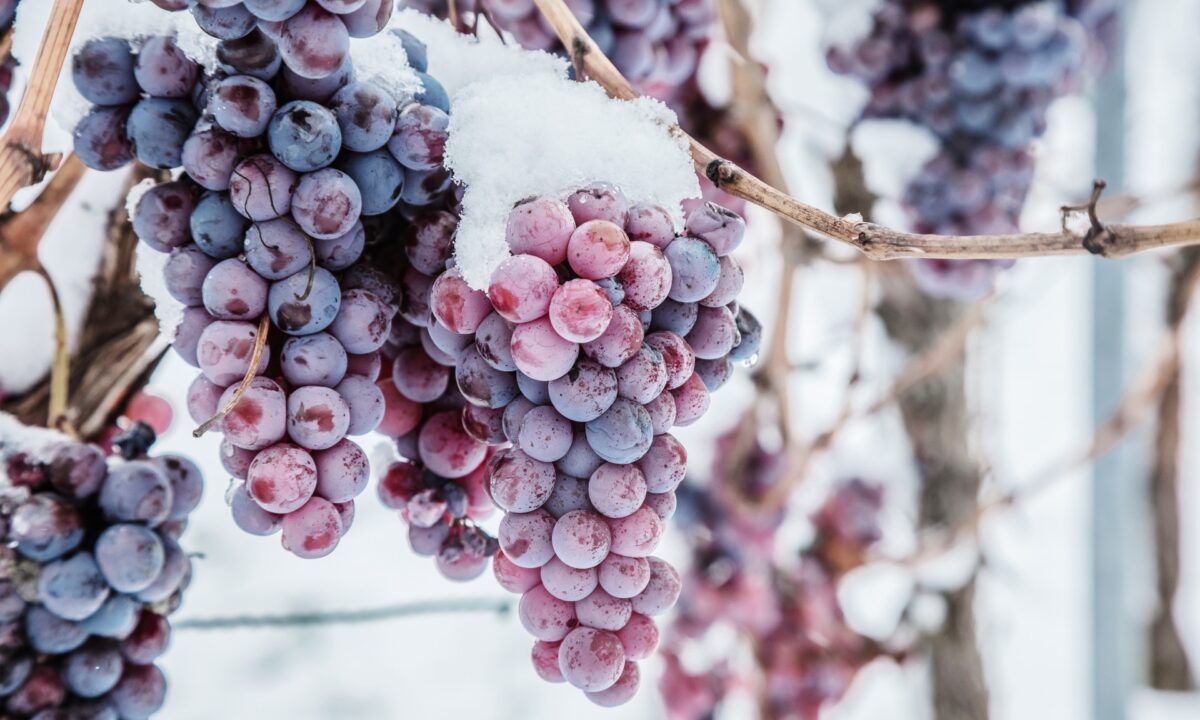 Most winemakers who intend to produce ice wines leave some table wine grapes on the vine until the weather turns cold. If the grapes freeze—and survive—the long, challenging, and costly process of making the wine begins. (KarepaStock/shutterstock)
Food

Ice Wine: The Elusive Elixir That Starts With Frozen Grapes

You’d think that the 2022 U.S. wine-grape harvest ended months ago, but curiously it’s now harvest time in a small number of northern hemisphere areas with conditions that couldn’t be stranger.

That’s the word out in northern Michigan, which a week ago experienced such cold weather (minus 7 degrees F on Jan. 31!) that any grapes left hanging on vines actually froze, giving winemakers a chance to make extraordinary wines.

It is not a common wine, though true wine lovers can become so awestruck by it they will go to great lengths to obtain a bottle.

It’s called ice wine, and it’s a specialty that entails great risks for winemakers alongside being costly to make. On occasion, a winery will lose a huge amount of money trying to make one.

Ice wines may be made from almost any grape variety, from cabernet franc to riesling. The latter is especially important in Germany, where some of the best Eisweins command outrageous prices.

It’s rare to see ice wines being made from common grapes because most are fragile, and freezing can not only destroy their skins, but also cause them to fall off the vine before they can be picked.

In Michigan, upstate New York, and especially in Canada, the most common grape used to make ice wine is Vidal (vee’-doll), which often develops superb aromas of peach, pear, pineapple, and a fascinating note that often reminds me of candle wax!

Most winemakers who intend to produce ice wines leave some table wine grapes on the vine until the weather turns cold. During weeks when grapes are left on vines, they develop unbelievable amounts of sugar, which attracts birds.

To protect berries from being eaten by scavengers, most wineries cover vines with netting—just one expensive aspect of making this stuff.

Then there’s the question of temperature. Will it get low enough to freeze the grapes? If so, harvested fruit is sent to a press, where ice crystals become water while the remaining fruit is quickly taken to a fermentation tank.

But this isn’t a traditional harvest: You really don’t get grape “juice.” Usually, it looks like syrupy jam. Some winemakers are forced to shovel the stuff—it doesn’t flow!

This syrup usually has as much as 45 percent sugar, almost twice the amount they get from grapes for table wine.

And the volume they get is scant. A ton of grapes picked to make table wine typically yields 150 to 175 gallons—about 70 cases of wine. Grapes intended to become ice wines end up losing much of their weight through desiccation. The result is usually no more than 50 gallons from a ton. Ice wine case production from that amount: about 20 cases—less than a barrel.

Then there’s the task of fermenting it. Not only is the sugar outrageously high, but so is the acidity. Under those conditions, there’s no guarantee the fermentation will proceed normally.

If all goes well, wineries that make ice wines will have a nectar perfect to pair with desserts—or to be served as dessert. Yes, it will be very sweet, but an ice wine will only be as good as it should be if its acidity is high, allowing it to balance the sugar.

I most appreciate ice wines that aren’t cloying, where there’s an equilibrium between tart and sweet.

Ice wines take a long time to ferment, so these wines won’t be available for several months. And they’ll be expensive, but small bottles are enough to serve several people—tiny sips of a delicious treat!

One final note: Most ice wines will carry the vintage 2021 because that’s the year in which the fruit was grown.