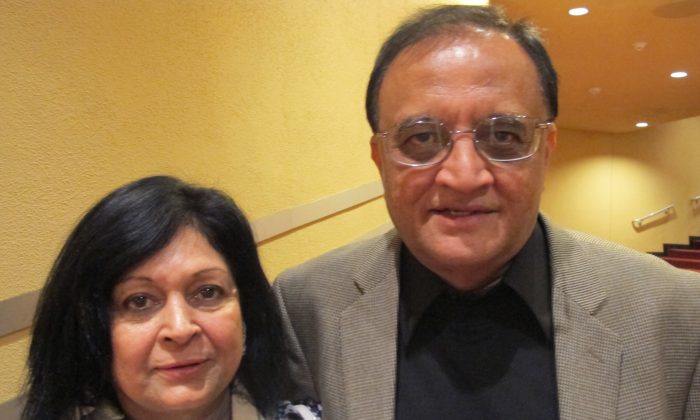 SAN JOSE, Calif.—Sitting two rows from the stage, Mr. Villin Shah, senior director of engineering at IBM, along with his wife, Jyotish Shah, and friends, enjoyed an evening of Chinese culture and heritage, presented on stage by Shen Yun Performing Arts on Jan. 2.

“The show brings out the best in the Chinese culture. I am very much thrilled to see [it]. I have never been to such a show,” Mr. Shah said.

“We are really fortunate to come and see such a performance here in San Jose, bringing these values and deep heritage of Chinese culture”, he said.

Mr. Shah has always been interested in learning more about Chinese culture, due to his own interest in his native Indian culture, and he not only found it, but was thrilled by the presentation.

“This is my first experience with the Chinese heritage and the culture that they have. And it teaches me—I’m from India originally—so we have a lot of cultural heritage. I have been exposed to the Indian heritage and culture. But I was always thinking about how people in China are similar to the Indian culture, how they are deeply involved in their cultural values,” he said. “It brings out the best in the show.”

Shen Yun’s program book states, “Shen Yun draws inspiration from China’s five-thousand-year-old civilization and the virtues it long embraced—compassion and loyalty, kindness and bravery. We believe this rich heritage is a precious gift worth keeping, and worth sharing with all of you.”

“The Eastern culture—the Indian culture and the Chinese culture—values are deep-rooted,” said Mr. Shar. He talked about  family values, respecting the individual and that all these values show up in Shen Yun’s vignettes.

“I am also very impressed with the show and some of the things not revealed to the U.S. public that we came to learn today, ” said Mrs. Shah. ” She meant that “people don’t have freedom to choose what they would like to do, their beliefs… So it’s really mind-opening what is happening in China right now.”

Mrs. Shah was referring to dance pieces that portray the persecution of Falun Gong, a traditional Chinese spiritual discipline. Falun Gong, also called Falun Dafa, includes meditative exercises and following the universal values of truthfulness, compassion, and tolerance. It has been persecuted in China since 1999.

A Shen Yun performance takes the audience through 5,000 years of Chinese civilization. Several classical Chinese dance pieces take the audience back to ancient dynasties and legends.

Mr. Shah greatly appreciated the insight into China’s many dynasties Shen Yun presented. He talked about the Han dynasty and that he “was very much intrigued about how these different dynasties over the years have come through in China.

” It is mind-boggling to me because I was never, ever aware of this Chinese heritage and cultural values. This is mind-blowing for me,” said Mr. Shah.

He also spoke of a spiritual aspect of the performance that was familiar to him. “We come from a similar background where we have spirituality, meditation, visit the temples on a regular basis …”

Mr. and Mrs. Shah both enjoyed the opening scene, titled “Salvation and Renewal.”

“Oh, I was impressed,” Mr. Shaw said. “It was mind-blowing. I was really impressed when the curtain opened up. The scene, the visual effects were so beautiful. Very, very good. Excellent.”

“It was a heavenly sight,” said Mrs. Shah. “A beautiful sight.”