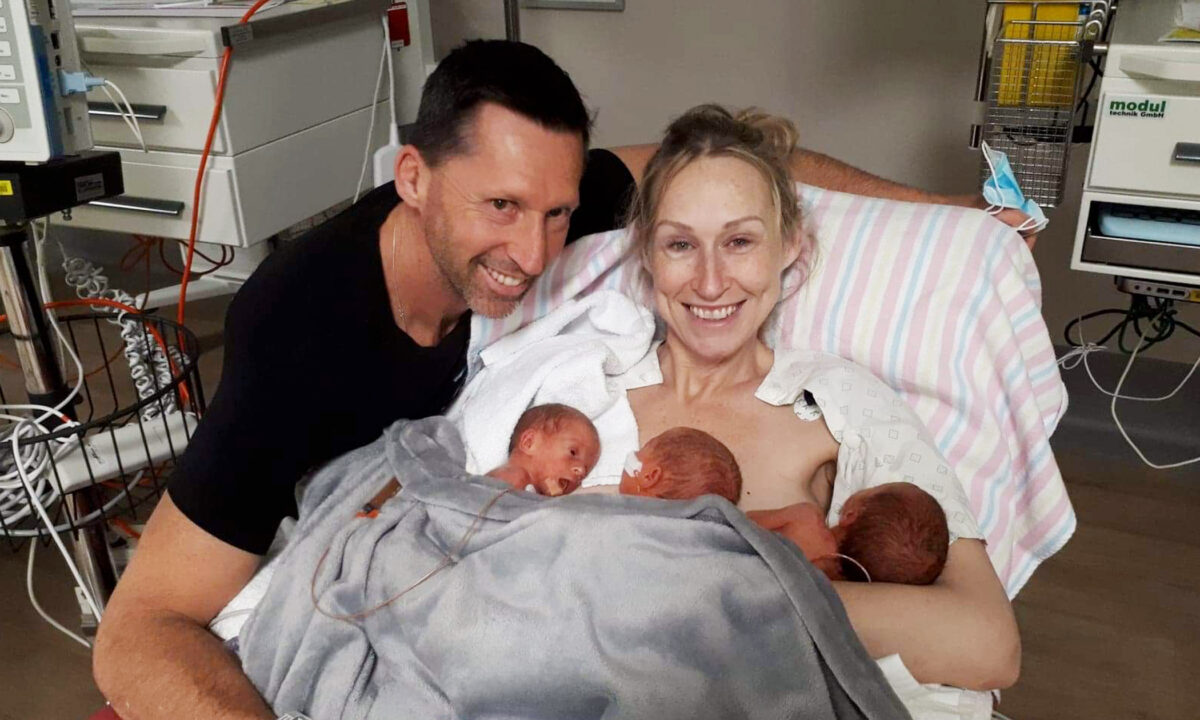 ‘I Was Just Happy We Were All Alive’: Mom Delivers Triplets at 45 During Medically-Induced Coma

After battling infertility for six years, an Australian woman was overjoyed to conceive triplets at 44, but suffered a seizure just seven weeks before her due date. She was rushed to the hospital and placed in a medically-induced coma.

Leonie Fitzgerald, now 47, has no recollection of the birth of her babies.

Leonie lives in the city of Brisbane in Queensland, Australia, with her husband, Peter, 52. After a “long, frustrating, and a little heartbreaking” period with infertility, it was confirmed that Leonie was pregnant with triplets in January 2020, after her third round of IVF.

The couple were in shock when they learned they were expecting three kids. “We were hoping for one, knew two might be a possibility as we’d put two embryos in, but had never even thought about three,” Leonie told The Epoch Times.

The mom-to-be went to great lengths to reduce stressors in her life, including quitting her job to start her own company, sleeping more, walking up to 30 minutes per day in nature, and “believing it would happen when it was supposed to.” Nonetheless, her pregnancy was not all that smooth.

She explained: “I had very bad morning sickness from about week seven, and my specialist put me on bed rest for my entire pregnancy. I was very high-risk due to not only my age, but I was carrying multiples, and had had four miscarriages previously.”

Leonie had a seizure in the ward.

“I was raced to the theater to deliver the triplets,” she explained. “I had a general anesthetic, rather than a spinal anesthetic, as it was the fastest way to be able to get the babies out. I was then transferred to the ICU whilst I was still asleep.”

Leonie’s seizure had triggered a code blue—a medical emergency. Peter waited outside the operating theater as his unconscious wife underwent surgery, contemplating whether he would lose them all.

Leonie quoted her obstetrician, Dr. Paul Conaghan, as having said, “They were in a lot of trouble. The evidence from the babies’ blood tests when they were initially born was that the seizure had been starving them of oxygen. After giving birth, Mrs. Fitzgerald spent 16 hours in a medically-induced coma.”

Leonie’s seizure was brought on by eclampsia, a “rare but serious” condition linked to high blood pressure during pregnancy. It wasn’t until two days after her C-section that Leonie was awake and wheeled to her babies in the NICU, surrounded by tubes, wires, and breathing equipment.

Leonie recalls being groggy and feeling quite numb for the first week after her pregnancy.

“I was just happy we were all alive and had been in the hospital for the seizure,” she said. “The NICU is quite an intensive experience, and to see our babies in ‘humidcribs,’ hooked up to numerous tubes and monitors, it was overwhelming.

“I was also concerned I was causing them more pain by taking them out of the humidcrib for skin-on-skin time; they were teeny tiny, and there were three of them!”

Leonie was monitored in the hospital’s cardiac ward for a couple of days after delivery, as her heart had enlarged during the seizure. After moving to the maternity ward to recover, she was discharged.

After 34 days in intensive care with an “outstanding” medical team, the triplets were all ready to go home, having needed no major treatments outside of the norm for premature babies.

In the early days after the triplets were born, Leonie and Peter were getting through 30 diapers per day and a tub of formula every two days. They used a whiteboard to stay on top of their feeding schedule.

Today, as the triplets approach their second birthday, they are going from strength to strength. Peter works as a relationships manager for a disability accommodation company, and Leonie, a property investment and wealth specialist at her own company, Wealthology Australia, gets to stay home with her babies.

Describing each of her triplets’ personalities, Leonie shared: “Liliana is strong-willed, independent, and has the courage of a lion. Charlotte is our social butterfly, she loves people and cuddles. Isabella is our joker, pulls lots of funny faces, and giggles a lot.”

Leonie also shared that the couple has inaugurated a measuring chart to record their heights and a record book for special milestones. Additionally, they have piggy banks with accompanying books for family and friends to contribute to (rather than buy plastic toys for birthdays, etc.) and they can write a little message.

“Our plan, when they’re 18 years old, is to give them the money we’ve invested for them and help them buy their first investment property, like my dad did with me,” Leonie explained.

The triplets now attend a Montessori childcare group three days a week, where they get to choose their own activities and learn “their way,” said Leonie, whose personal parenting philosophy is to “support them on their journey.”

After close friends suggested she document their family life on Instagram, Leonie started a dedicated page, @thebusinessoftriplets, to help others through their own fertility journeys and to support parents of multiples.

“It’s a very unique experience and it can be challenging, having all your kids at once,” she reasoned. “I want to provide hope and let people know they are not on their own.”

Reflecting back on her journey, Leonie said that a mantra, “The universe has bigger plans,” once helped her navigate her miscarriages, and a quote that she now shares with others, “God’s delays are not God’s denials,” has always helped her traverse tough times.

Today, her thriving triplets are all the evidence she needs that the journey was worth it.

“There is so much love in the house, and always someone to cuddle,” she said. “I love watching them interact with each other, and I feel very honored that they chose me to go on their journey with.”