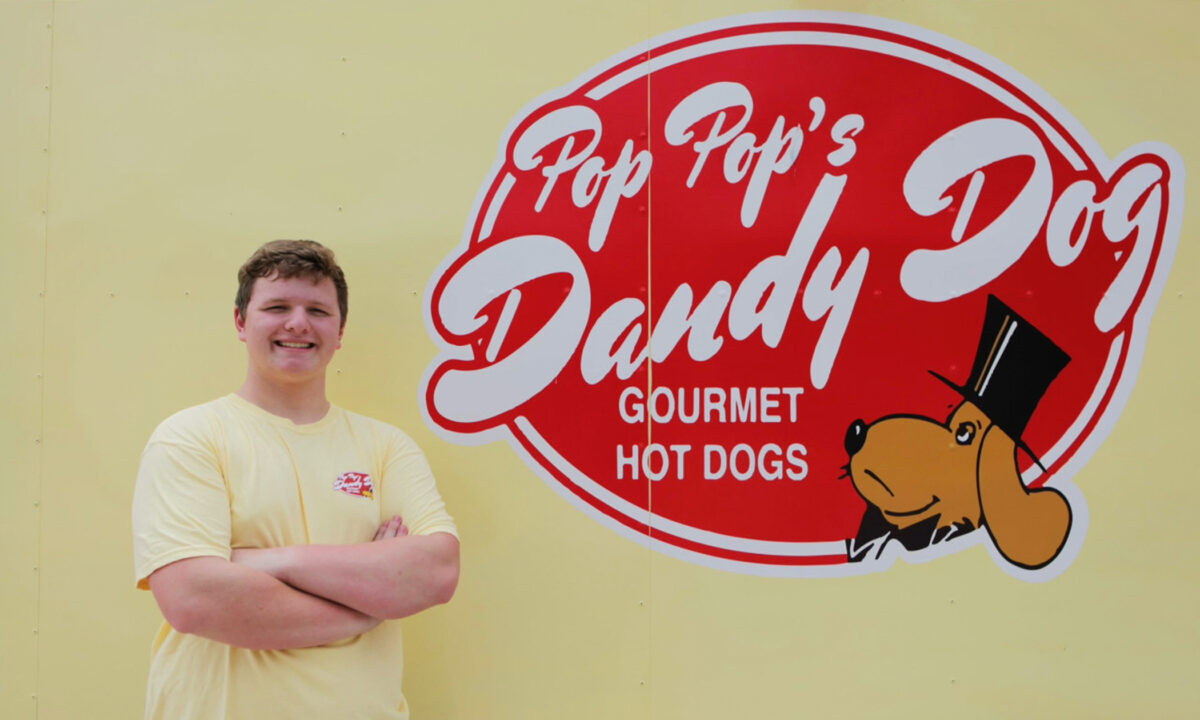 ‘I Wanted to Do Something Entrepreneurial’: Boy, 16, Starts Food Truck Business After Inspiration From Granddad

At 16, Jacob Irving from Montgomery, Texas, has achieved an incredible feat by starting his own gourmet hotdog truck business, after garnering inspiration from his grandfather.

The teen was determined that he didn’t want to wait and spend “a million dollars” in attending college and a few years on a degree that he wouldn’t use. So young Irving decided to start something with a low overhead and cheap startup cost: Pop Pop’s Dandy Dog.

Sharing more about the inspiration behind his venture, Irving said that his grandfather (Pop Pop) used to own a restaurant called Dandy Dog in Lewisville, Texas, in 1985. Since Irving’s grandfather had already completed most of the work on the front end almost 40 years ago, Irving just decided to take over his old logos, menu items, and recipes.

In fact, those recipes are reportedly delicious. Irving’s truck has gained significant media attention after being highlighted by a popular local concert promoter, Charles Digg, whose social media post caught the eye of former Texas governor candidate Chad Prather. Prather reposted the story to his million-plus followers, and visitors flocked to Pop Pop’s Dandy Dog to get a taste for themselves.

However, apart from all the attention the food truck has been receiving, it’s been a lot of hard work for Irving, who will attend senior year at Lake Creek High School next year.

To start out, he first had to persuade his parents to buy him a trailer instead of using the money to go to college.

“It took months of negotiating, hours writing up business plans, and many conversations to convince them,” Irving said.

The deal that was later made was that if Irving’s parents bought him the trailer, he would cover all the other costs, including generator, permits, food, and any other extra cost.

Even after all that passed, it took Irving countless sleepless nights and 20-hour work days for weeks to get up and running—all while he was still attending school.

However, Irving hasn’t been a stranger to hard work. He got his first job at Chick-fil-A as soon as he turned 14, and he’s never stopped. He worked two jobs at a time, all while trying to maintain his school responsibilities and extracurricular activities.

“I’m in the top 5 percent of my class, so I have not let my grades slip,” Irving said, despite coming home at 2.30 a.m. and leaving for classes a couple of hours later.

Once Irving turned 16 and had saved up enough, he opened his venture.

“I felt proud of the work I had done and proud of my many supporters for helping me make it happen,” he shared.

Some of his supporters include the owner of Texas Twist & Shakes, Bill Clevenger, who has helped guide him and been generous to him by offering extra freezer space and various other things.

Meanwhile, Tom Cronin at the Cozy Grape has also helped him by offering advice and various other favors.

Irving’s girlfriend, Edi, has been a great support to him also.

“She has supported me and stayed with me through endless hours of work and time I had to spend away from her,” Irving said. “She’s helped me run the trailer and been the biggest help to me I could’ve asked for.”

Running a business does take its own toll, Irving admitted. The demands of the job often leave him stressed, nervous, and anxious; more than an average teenager.

“I have to miss out on certain things because I’m busy doing things for the business,” he said. “Spending time with family and friends is hard because when I do get the time to spend with them, there are still things I have to be doing (responding to Facebook comments, messages, ordering food). It never stops.”

Despite all that, Irving says that “it’s totally worth it.”

Over the course of running his own business, the grateful teen has learned a lot of life lessons, such as asking for help from people around him.

“My whole life I’ve been very independent to a fault,” he said. “Not only that but I’m very, very stubborn. I will never accept help even when I really need it.”

But Irving has come to realize that if you’ve been loving and kind to those around you, they will always be willing to do a favor for you or give you some advice.

Being an entrepreneur at such a young age, Irving said that he’s pretty proud of his achievements and it should be an inspiration for people like him that they can do it.

He also shared a piece of advice for other youngsters who have an entrepreneurial spirit.

“In the words of the Nike brand, just do it. Make it happen,” he said. “Hurdle over all the problems you come across and find solutions.”

He admitted that it might be difficult and there could be days where one might feel discouraged, but he urged to stay motivated, determined, and driven. This will surely make success possible.

As for what the future holds for Irving himself, he said that the plan doesn’t stop at one truck. His goal is to start a franchise and get Pop Pop’s Dandy Dog to more locations. He’s thankful for the support and attention his venture is getting, and for his grandfather who inspired him all along.

“With his wild stories and his will to instill me with drive, he helped me gain the motivation and determination that every business owner needs,” Irving said.