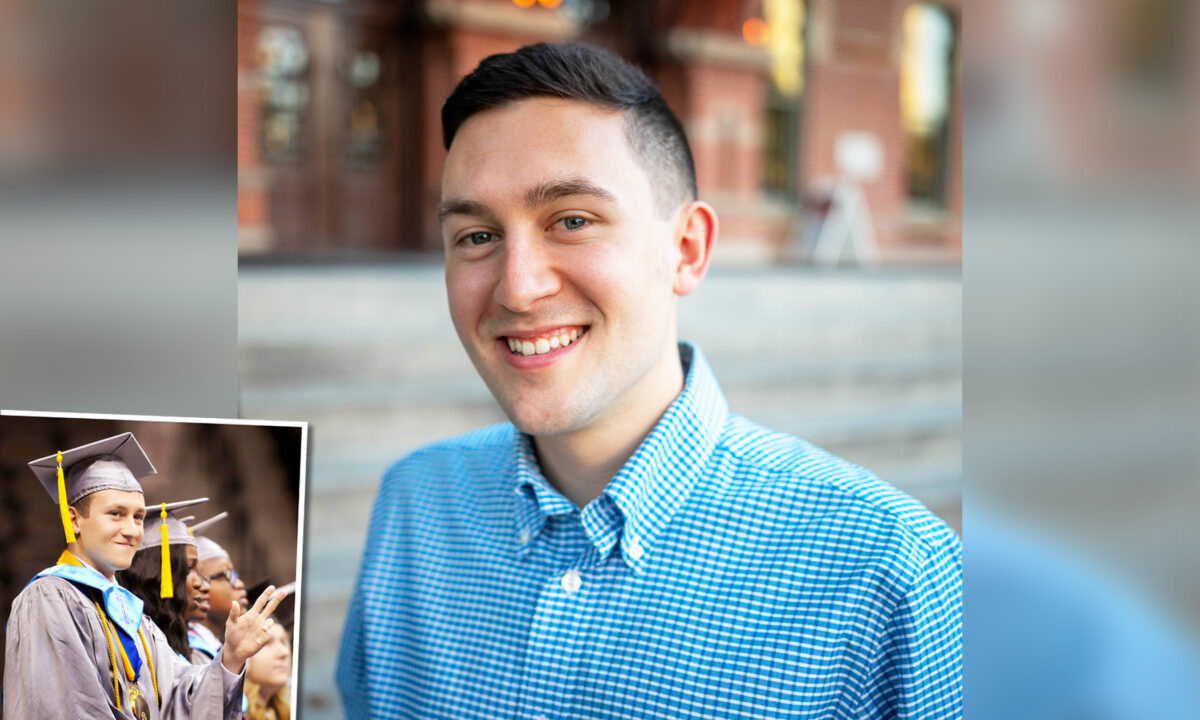 ‘I Made This Pact to Change My Life’: Homeless Valedictorian Shares Journey Out of Poverty

After losing his mother to leukemia, a Kentucky native and his family lost their home and struggled with homelessness for a period of time until they were taken in by the boy’s grandmother in Florida. Experiencing a glimmer of light, the boy made a pact: to change his life for the better.

Through hard work and tenacity, Griffin Furlong, 26, excelled at school and became valedictorian. Today, he’s a civil engineer and is writing a book about his inspiring journey from living in a homeless shelter to becoming a high achiever.

Griffin’s worldview changed completely when he lost his mother at the tender age of 6.

He told The Epoch Times: “It made me start thinking about what eternity meant, and I learned that life was very, very fragile.”

In the days leading up to her death, there was a series of events that have since been ingrained in Griffin’s memory forever, he said. He recalls spending time with her when she was at the hospital. She helped him to learn to read, and he would read back to her. Although he didn’t completely comprehend it at that time, he knew his mother was suffering.

That morning would be the last time he would see his mother.

He remembers standing beside her open casket at the funeral, holding her “cold hand,” hoping it was all a dream. Back home, his heartbroken older brother, Sean, cried with him in their shared bedroom. They then promised to be there and support each other no matter what challenges they encountered.

Griffin’s father, a car salesman, lost his job after his wife died, and filed for unemployment.

“He really wanted to watch over us, that was his main priority, and that’s what I commend him for today,” said Griffin. “[But] we went through a lot of our retirement accounts; it was a slow depletion of our money and our mental and emotional wellbeing.”

The family downgraded from their rented house to an apartment, temporarily living with Griffin’s maternal grandmother before “bouncing around” friends’ couches.

At that time, Griffin and Sean found solace in Little League baseball—as per an account of his story shared with Love What Matters. Griffin recalls writing “Never Give Up” with a marker pen under the bill of his baseball cap.

Griffin told The Epoch Times: “Life was definitely changing, and I knew it changed for the worse when we finally ended up in a hotel with a little bit of money. That’s what led us into the homeless shelters.”

At Wayside Christian Mission homeless shelter in downtown Louisville, Griffin felt like a caveman, tallying the days on the wall. His family took one of two bunk beds in a shared room; another family took the other. There were rats and mold, the plastic mattresses were thin and cold, and the shelter wasn’t heated.

Griffin also began to feel like an outcast at school. He was the only kid to hop off the school bus from the homeless shelter and rarely wore clean clothes. Despite this, never once did he tell a teacher that he had lost his home.

To this day, Griffin considers this period of his adolescence a test of stamina and patience. Yet the more he took a step back and observed his life, the more he realized the positives surrounding him. He then took the “glass half full” approach to life.

Circumstances changed when Griffin and his family were removed from the shelter and they stayed in a hotel.

However, at that time, his paternal grandmother, living in Jacksonville, Florida, with his aunt and uncle, reached out. She had always sent money, but had finally decided to move her grandsons in.

It was “just like a miracle,” said Griffin. The move was like a “restart button” to his life.

The first time Griffin achieved straight-As was in sixth grade. His brother, Sean, a huge role model, told him, “If you keep getting all A’s, you can be valedictorian.”

Griffin said, “I made this pact to really change my life, the more I started realizing that my input was my output.”

However, it wasn’t all smooth sailing; a few months before high school graduation, in 2014, Griffin met with another ordeal where he found himself homeless again.

Throughout this ordeal, Griffin kept up with essay deadlines, exams, and college applications. A few days later, he found out he was his class valedictorian.

“My brother was dating a news producer at the time,” Griffin said. “She was like, ‘Hey, I think a news story about this could really help you get a scholarship.’ She was persistent enough, so I finally agreed.”

“Literally the next day, I get a call from Good Morning America and The Today Show, and I wake up and my face is on the TV. It was honestly unreal,” he said.

His story came in as a huge shock to his teachers and his friends.

The news coverage changed Griffin’s life and cemented his personal motto: Never Give Up. With a scholarship and a public fundraiser behind him, he enrolled in Florida State University’s engineering program, alongside like minds who provided “awesome motivation.”

He struggled, but grew, earning internships and becoming a “sponge” in learning as much as possible.

Joining the professional world, Griffin’s work ethic persisted. He moved up the ranks quickly, gaining the trust of his colleagues and mentors. He still firmly believes mindset controls every action we make.

“If I’d made the choice back in the homeless shelter to not care, to not do my work, to just sit around, then my path would have been completely different,” he said. “I probably would have hung around people who thought the same way. I probably wouldn’t have graduated.

Griffin, who now lives in Tampa, claims his myriad experiences made him the man he is today. Citing an Earl Nightingale quote—”Success is the progressive realization of a worthy goal or ideal”—he says his lifelong goal is to learn and grow.

He’s currently writing a memoir-based book of his inspiring journey and hopes to launch a scholarship fund providing full tuition for a student in need every single year. A portion of his book proceeds will go toward the fund.

Griffin also hopes to one day have the financial means to relieve his father from minimum-wage jobs once and for all.

“I think the best thing that we can ever do is share our perspective on things, because you can learn a lot from people. One story could change someone’s life,” he said.