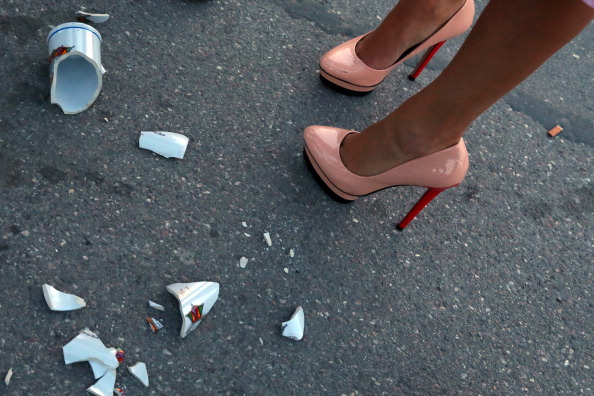 I Am a Klutz

Recently I went to a friend’s home and was helping her prepare dinner. I was opening a can and it suddenly spurted all over. Her husband walked in, saw what happened, laughed, and said: “That might happen to one in 100,000 cans, but it had to happen to you.”

That’s because I am a klutz.

For those unfamiliar with this lovely Yiddish word, it means clumsy, accident-prone.

To illustrate: there is a pin lying on the floor in the middle of Grand Central Terminal. Ten thousand people will step over it and not even know it’s there. The klutz will find it and trip over it. I am that klutz.

Things just happen to me. I trip, drop things, glassware can enjoy no safety around me, and I have broken enough mirrors to amass a sizable amount of bad luck, if superstition would have it. Recently I discovered that a small mirror that I carry in my makeup case was broken. I don’t know how it happened. I continued to use it because I knew that if I got a new one, the same thing would happen, for the same unknown reason. A friend who saw this was horrified and said it was terribly bad luck.

This is not the case, so far.

One day I was in a client’s office with some other people and we were admiring a sculpture with small hanging parts on his desk. All the men picked it up, admired it and handed it around. Finally, someone handed it to me. That was also its finale. While I held it, it completely fell apart. My client looked at me, sighed and said, “golden fingers.” And men are supposed to be clumsy!

Not while I’m around.

But I think there is a small upside to my klutziness—or maybe I just desperately want to believe that there is. When I spill, drop, break, or otherwise destroy something, it tends to put others at ease. Of course, if it is someone’s treasured possession that I’ve pulverized, the upside also disappears. If it isn’t, they tend to breathe a sigh of relief that I did it, not them. It sort of breaks the ice, pardon the pun.

I come by my klutziness naturally. My adored mother was also a klutz. The advantage of that was that she never punished me when I was a child if I stained, ripped, spoiled, or broke something. She always felt she could have done it, herself, just as effortlessly as I did.