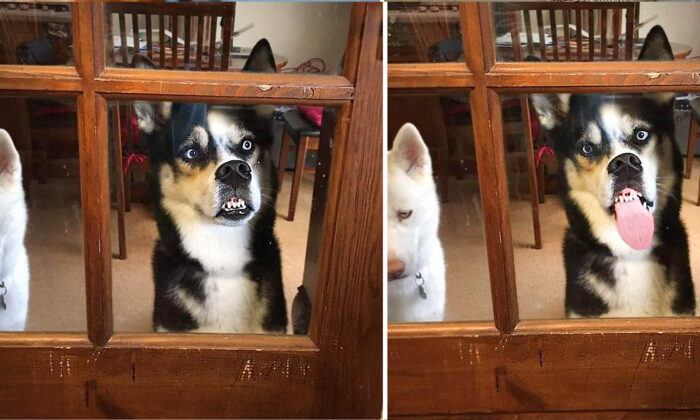 Husky Makes Hilarious Faces Pressing Nose Against Window When He Wants In, Cracks Up Owner

This husky has picked up a hilarious habit of pulling goofy faces against his owner’s window.

Anna Dunford’s 2-year-old Siberian husky, Baloo, has been keeping his family entertained by pressing his face against windows and pulling a range of hilarious, goofy faces.

The 36-year-old from Plymouth says that the funny pictures capture Baloo’s personality perfectly, as he is a cheeky chappy, and slightly on the dopey side.

While Anna’s mom was preparing Baloo’s breakfast, she turned around to see his face pressed up against the window.

“My mom was looking after [Baloo] one day and as she was sorting his breakfast, she got a shock when she looked around and saw his face pressed up against the window of a door with his tongue and teeth showing,” Anna said.

“Baloo makes a habit of pulling these faces now and it is the funniest thing.

“You can’t help but giggle.”

If Baloo is out in the garden or out of the room and wants to come in, he will press his face against the window or start licking it in a comical display.

“Especially if we have people around the house, sometimes he is not in the room because not everyone likes dogs,” Anna adds.

“So, he will lick the window and put his face against the window to get our attention.

“It really amuses people that come to visit. They think he is hilarious.”

Anna also had Baloo’s mom, called Bear, and says that the pair are total opposites of each other.

He was the only puppy in the litter and Anna knew straight away that they were going to keep him.

“He is a little character,” she said. “He’s quite dopey and just loves to be with me.

“He keeps me smiling all day long because he is just so big and bouncy.”

Although he makes Anna’s job of keeping the windows clean much harder, she doesn’t mind because it is just so funny.

“If he was a person, he wouldn’t be the sharpest tool in the shed, that’s for sure,” she added.

“It’s hilarious and when we managed to snap a picture of him doing it, it gives everyone a good laugh.”