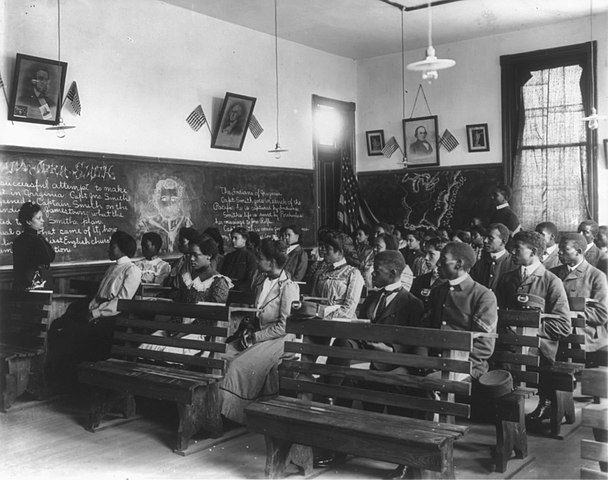 A history class in session at the Tuskegee Institute, 1902. (Public Domain)
American Essence

If we slip back in time to the late 1860s, we find an America torn apart by war and suffering.

In the spring of 1865, the North had defeated the Southern Confederacy. Less than a week after Confederate forces surrendered at Appomattox, Abraham Lincoln, whose policies might have changed the course of American history following that defeat, lay dead, a victim of assassination. The Radical Republicans in Congress were now calling the shots and were intent on breaking what remained of the governments of the South, pushing for Republicans and blacks to take over state legislatures. Meanwhile, the war had torn apart the South’s infrastructure. The plantation system was erased, at least for the time being, and the railroads were wrecked. Many industries, such as they were, had either closed their doors or were in ruins.

The political and economic fall-out of that post-war era were immense. For years, Southerners resented the North for its Reconstruction policies, the military occupation, the flood of Northerners seeking to win their fortunes in that prostrate land, and the rights granted to blacks. Some Southern leaders organized groups like the Ku Klux Klan, loose-knit organizations designed to drive out Northern “Carpetbaggers” and to intimidate African Americans. On the other hand, Northerners regarded the South as a backwater, a region scarcely identifiable as American. Worst of all, after a brief springtime of African Americans being granted their civil and legal rights, up rose the Jim Crow policies that snatched away those liberties for nearly a century.

Wisdom, forgiveness, and reconciliation were missing on both sides of this political battleground. Indeed, we’re still living today with the consequences of those post-war mistakes and vendettas. Yet some men of that time devoted their lives to rebuilding and reunifying the country.

A Man of War Becomes a Man of Peace

After leading the Army of Northern Virginia, Robert E. Lee was a hero to Southerners and was highly regarded for his brilliance on the battlefield by many Northerners. The defeated general might have found lucrative employment in any number of capacities.

Instead, Lee moved his family to Lexington, Virginia, and became the president of Washington College. Faced with financial ruin and low enrollment, the college wanted Lee both for his name recognition and his leadership skills. Moreover, he had once served as superintendent of the United States Military Academy and so had some experience with academia.

By choosing Lee for this post, the college’s trustees were handsomely rewarded. During the five years of his tenure, donors from both the South and the North sent money to the school. The faculty grew from 4 to 20, and enrollment climbed from 50 to almost 400 students. These young men entered the school not only because of Lee’s already legendary wartime exploits, but also because of his personal interactions with his students.

On accepting the college’s offer of the presidency, Lee had written, “It is the duty of every citizen, in the present condition of the Country, to do all in his power to aid in the restoration of peace and harmony.” He bore that idea constantly in mind as he counseled and guided his students and others. When one Confederate widow, for example, wrote to him of the bitterness she felt toward the North, Lee responded, “Dismiss from your mind all sectional feeling, and bring [your children] up to be Americans.”

On October 12, 1870, Lee died from a massive stroke, his heart strained during the war and from the long hours he’d put in at the college. In 1955, his pre-war home, Arlington House, became a monument dedicated to Lee’s memory for his military genius and because after the war he had “fervently devoted himself to peace, to the reuniting of the Nation, and to the advancement of youth education and the welfare and progress of mankind.”

Ambassador of Education and Goodwill

Two years after Lee’s death, a young black man, a slave as a child, arrived penniless at Virginia’s Hampton Institute, the recently opened college and trade school for African Americans. Over the next few years, Booker T. Washington so distinguished himself as both a student and a teacher that in 1881 the school’s founder, Gen. Samuel Armstrong, asked his 25-year-old protégé to found a similar institution in Tuskegee, Alabama.

By the time of his death, Washington left behind a school with a student body of 1,500, a faculty with more than 80 members, and more than 100 classrooms and dormitories built mostly by the students themselves. Across the American South were hundreds of graduates of the Tuskegee Institute, doctors and teachers as well as men and women in the trades.

During those years, Washington also became a figure highly revered for his wisdom, his poise, and his attempts to bring peace and harmony between the races. Though some of his contemporaries bitterly accused him of being too accommodating and slow in his advocacy for full rights for African Americans, many blacks and whites applauded his ideas and regarded him as the greatest living man of his race. Theodore Roosevelt, for instance, was an admirer of Washington’s work, called on him for counsel, and considered him a friend.

In a speech at the town of Hale’s Ford, Virginia, delivered later in his life to a black and white audience, Washington stressed that there was “opportunity … in this country for every man, whether he was white or black, if he had the heart and courage to work.”

It Starts With Love

Confronted by hard times and embittered people, Lee and Washington worked to bring people together. In his renowned address in Atlanta in 1895, for instance, while speaking to an audience of whites and blacks, Washington said of the races, “In all things that are purely social we can be as separate as the fingers, yet one as the hand in all things essential to mutual progress.”

At the end of his monumental trilogy “The Civil War,” another important person of that era, Shelby Foote, reports this exchange between former Confederate president Jefferson Davis in his last days and a visitor, “a reporter who hoped to leave with something that would help explain to readers the underlying motivations of those crucial years of bloodshed and division.”

Davis pondered briefly, then replied. “‘Tell them—’ He paused as if to sort the words. ‘Tell the world that I only loved America,’ he said.”