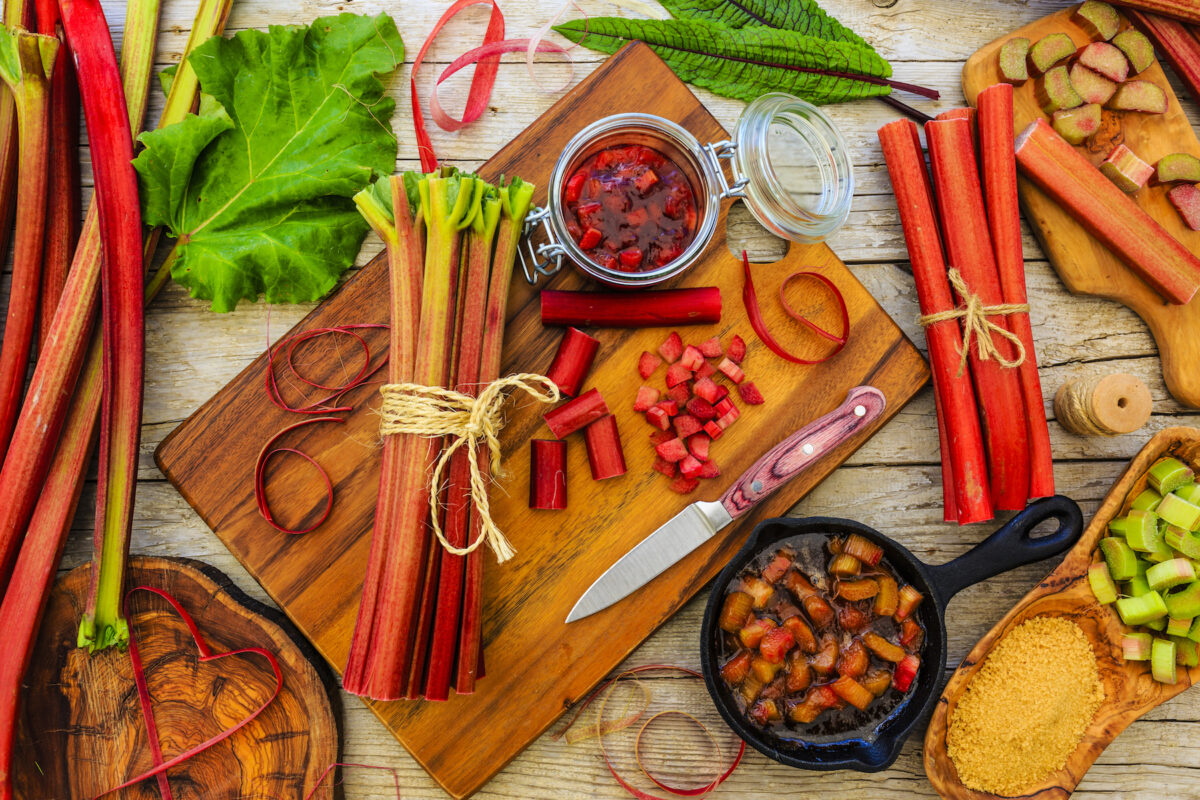 Emodin, a compound found in Chinese rhubarb (Rheum palmatum), may help prevent colon cancer,[1] confirming one of its ancient uses as an anticancer remedy in China. As a revered medicinal herb in traditional Chinese medicine, Chinese rhubarb, also known as rhei or dahuang,[2] has long been prized for its antibacterial, anti-inflammatory and antifibrotic properties.

One of its most powerful compounds — emodin — is a natural anthraquinone with demonstrated antitumorigenic properties. Past studies in mice have shown, for instance, that emodin safely reduced mammary tumorigenesis and was beneficial for colorectal cancer.[3] New research also found that emodin may be an “effective primary therapy against the onset of genetic and chemically induced sporadic colorectal cancer.”[4]

Aside from skin cancer, colorectal cancer is the third most common type of cancer in the U.S., as well as the third leading cause of cancer-related deaths.[5] Lifestyle factors, including dietary choices, play a role in the occurrence and progression of colorectal cancer,[6] with only an estimated 20% of cases caused by genetic factors, and the remainder due to environmental factors.

Up to 70% of colorectal cancer (CRC) cases are believed to be related to diet, leading researchers with the University of South Carolina School of Medicine to state:[7]

“As such, bioactive food components offer exciting possibilities for chemoprevention due to their potential to target many factors associated with the development and progression of CRC. Furthermore, the ability of bioactive food components to elicit tumoricidal effects without displaying the high toxicity exhibited by standard pharmacological interventions may translate to improved quality of life and survival in patients with cancer.”

Citing a “critical need” for studies that both establish the efficacy of bioactive food compounds as well as reveal the mechanisms of action behind their benefits, the team set out to uncover emodin’s potential to combat colorectal cancer.

Using a genetic model of intestinal cancer and a chemically induced model of colorectal cancer in mice, the researchers administered emodin to the animals three times a week for 11 weeks. In both cases, emodin reduced polyp count and size.[8] Polyps are growths on the inner lining of the colon that can turn into cancer.

In addition, mice that received emodin had lower pro-tumor macrophages — immune cells that may promote tumorigenesis.[9] Overall, the researchers concluded that emodin is an “effective primary therapy” against the onset of colorectal cancer, noting:[10]

“We established that emodin reduces the M2-like protumorigenic macrophages in the tumor microenvironment. Furthermore, we provide evidence that emodin may be acting to antagonize the P2X7 receptor within the bone tissue and consequently decrease the activation of proinflammatory cells, which may have implications for recruitment of cells to the tumor microenvironment.”

In addition to colorectal cancer, emodin also shows promise for other types of cancer due to its ability to block tumor-promoting interactions between cancer cells and macrophages. This alters the tumor microenvironment, ameliorating its immunosuppressive state.[11]

In 2020, University of South Carolina School of Medicine researchers again looked into the cancer-fighting properties of emodin, noting that they previously found it inhibited breast tumor growth in mice.[12]

In a study published in the journal Theranostics, they revealed that administering emodin to mice prior to surgery to remove breast tumors stopped the cancer from metastasizing and recurring in the lungs after surgery.

Another 2020 study found, similarly, that emodin may be a useful therapy for triple negative breast cancer because it inhibits angiogenesis by targeting vascular endothelial growth factor A transcription.[14] A 2016 review of emodin also broke down its anticancer activities, noting:[15]

Interest in emodin’s anticancer effects has increased in recent years, and a 2021 review published in Cancers touted its benefits, as well as potential toxicity, including hepatotoxicity and reproductive toxicity. Because of this, they noted that more research is needed to determine optimal dosages to maximize benefits and reduce potential toxicity. Still, they noted:[16]

“Emodin has been suggested to be effective for cancer management, principally in digestive system cancers (like pancreatic cancer) by modulating multiple molecular targets included in tumor growth, angiogenesis, invasion, and metastasis according to in vivo or in vitro experimental models. In current years’ investigations, emodin was shown to have anticancer activity in different cancer types …”

Emodin, which is found not only in Chinese rhubarb but also in aloe vera, giant knotweed, the herb Polygonum multiflorum (tuber fleeceflower) and Polygonum cuspidatum (Japanese knotweed), has impressive therapeutic properties beyond its anticancer effects, which include:[17[18]

The neuroprotective effects of emodin and other rhubarb anthraquinones, including chrysophanol, rhein, physcion and danthron, are also well established. Such compounds have a therapeutic effect on central nervous system diseases, such as:[20]

With a more than 2,000-year history of use in traditional Chinese medicine,[21] emodin is also known for laxative effects, has a wide range of actions on the immune system and may be useful in supporting bone health and preventing osteoporosis.

In its wild form it’s known to open the blood-brain barrier, cause cell damage (cytotoxicity) and, Dr. Robert Malone, the inventor of the mRNA and DNA vaccine core platform technology,[22] said, it “is active in manipulating the biology of the cells that coat the inside of your blood vessels — vascular endothelial cells, in part through its interaction with ACE2, which controls contraction in the blood vessels, blood pressure and other things.”[23]

It’s also been revealed that the spike protein on its own is enough to cause inflammation and damage to the vascular system, even independent of a virus.[24] The World Council for Health (WCH), a worldwide coalition of health-focused organizations and civil society groups that seek to broaden public health knowledge, has released a spike protein detox guide,[25] and emodin is a featured spike protein inhibitor, which means it inhibits the binding of the spike protein to human cells.

Interestingly, emodin also has antiviral properties and was found to inhibit the SARS-CoV coronavirus. In 2016, researchers noted:[26]

“[E]modin significantly blocked the S [spike] protein and ACE2 interactions in a dose-dependent manner and inhibited the infectivity of S protein-pseudotyped retrovirus to Vero E6 cells. The results suggested that emodin might be considered as a potential lead therapeutic agent in the treatment of SARS.

A Warning About Oxalates in Rhubarb

While emodin is primarily found in Chinese rhubarb, anthraquinones are also found in Rheum rhabarbarum — the tart rhubarb that’s popular for cooking. While rhubarb has many health benefits, such as being an excellent source of vegetable nitrates, which turn into beneficial nitric oxide, it’s also high in potentially toxic phytochemicals known as oxalates.

As noted by Dr. Paul Saladino, a certified functional medicine practitioner through the Institute for Functional Medicine, “You could get really sick from the oxalates in rhubarb, for example. We’re aware that some plants are so toxic that they’re frankly poisonous. We could die [if we eat them]. Basically, every plant in nature is part of a delicate balance, a delicate exchange system with other animals.”[27]

You can mediate against oxalate toxicity by adding about 500 milligrams of powdered calcium citrate or magnesium citrate — which bind to oxalate and allow it to pass unabsorbed through your digestive tract — to, for instance, a rhubarb-containing smoothie (or a green smoothie, as many vegetables contain high levels of oxalates). But if you’re consuming rhubarb in supplement form, it’s important to ensure that the oxalates have been removed.