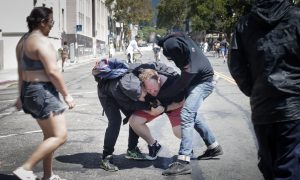 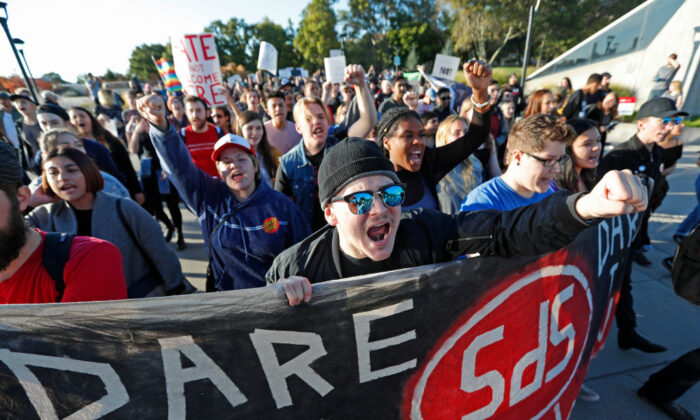 Protesters from Students for a Democratic Society demonstrate on the University of Utah campus against an event where speaker Ben Shapiro was due to speak in Salt Lake City on Sept. 27, 2017. (George Frey/Getty Images)
People

Evolutionary psychologist and professor Gad Saad was still a doctoral student when he first came across postmodernism, the school of thought that teaches there is no objective truth. It immediately rang false, and, as a scientist, he saw how postmodernism went against scientific principles.

“Truth can change in science—what we thought was true 300 years ago may have had to be updated today, truth is provisional in science—but we do think there are truths,” Saad said. “Postmodernism rejects that; that’s why I call it the granddaddy of idea pathogens.”

In his new book, “The Parasitic Mind: How Infectious Ideas Are Killing Common Sense,” Saad implores readers to defend truth and intellectual freedom, and provides a guide.

These bad ideas, such as cancel culture, erasing biology, and safe spaces, are part of something Saad has termed an idea pathogen. He takes the idea from brain parasites, which take hold and often lead hosts to bizarre, self-damaging, and fatal behavior—mice that become attracted to cat urine, insects that can’t swim but hurl themselves into the water, humans who develop a fear and physical need to reject water and become dehydrated as a result.

These bad ideas are not good for us, they lead to bizarre and detrimental behavior, and erode our sense of reality. But social justice warriors will still cling to them.

Though these ideas originate in the university, Saad said the majority of students are not social justice warriors. In fact, most are likely oblivious, maybe timidly refraining from voicing common sense before persuasive progressive professors, and just trying to do their best in classes while holding part-time jobs. But we don’t need a majority of people infected with bad ideas to cause serious damage.

The university as a place for intellectual freedom and to debate ideas is a picture that has been crumbling over the past several years. It’s because these campuses are intellectual echo chambers that these ideas have been allowed to fester and spread beyond campus walls, Saad explained. Thus, the cure is two-fold: People must seek the truth and have the courage to defend it. He ends the book with a chapter of examples of seeking truth through evidence.

“What makes us strong in our ability to engage in critical thinking is to be challenged,” Saad said. “Activate your inner honey badger, be ferocious—the honey badger is the size of a small dog but if it is challenged by a bunch of adult lions they will back down because it is so ferocious.”

“If your principles are well-reasoned, don’t be timid. Challenge people—politely, nicely—but challenge them,” Saad said.

When Saad brings up truths that go against the leftist ideal of society, and the evidence from multiple angles to support it, the responses tend to be overwhelmingly positive. But perhaps that’s part of the problem, he said. Most of us have common sense but aren’t willing to voice it.

“Many of the people who write to me—I receive thousands of thousands of messages—they will say, ‘Dear Dr. Saad, I am professor so-and-so at such university, and let me tell you, I love what you do and thank you for speaking out against such lunacy—but please don’t mention my name,'” Saad said. He thanks them in reply, but then asks whether they can’t see that their not wanting to voice this publicly is part of the problem.

“What is it that you’re afraid of?” he asked. “I escaped Lebanon, at the imminent threat of execution because we are Lebanese Jews, so I really had something to be fearful of. What is it that you’re so afraid of in the West that you’re unwilling to speak against the idea that boys too can menstruate?” Preventing bigotry should not come at the expense of rejecting reality, he added.

Being part of the last group of Jews in Lebanon, Saad’s family resisted the idea of leaving their home despite growing tensions in the Middle East. But when a civil war broke out in 1975 and the threat against their lives became a real and imminent threat, they emigrated to Canada. Years later, his parents returned to Lebanon for business reasons and were kidnapped. Although his parents returned, these events have left an impression on him that only strengthens his resolve to pursue freedom and truth.

“Partly it’s my personal experiences, having seen in my life the attacks on truth, and the lack of freedom in the Middle East,” he said. “It’s also part of my unique personhood: At the end of the day … for me to put my head on the pillow and be able to sleep well, I need to know that I did all that could, however big, however small, to fight for freedom and truth. If I’ve done that, if I’ve never shied away from an opportunity to defend truth and freedom, then I’ll sleep well. If I don’t do that, then I will feel as though I am a fraud. So I live my life that way.”

“Most people are on board, the silent majority hates this, but they are cowed into silence,” he said. “But don’t leave these bad ideas unchallenged.”