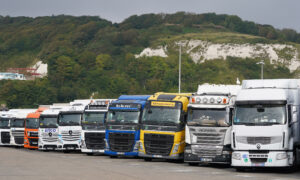 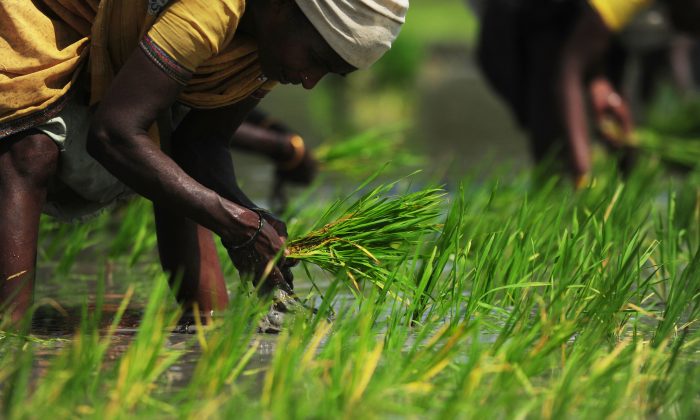 Indian laborers plant rice paddy saplings at a field in Vaiyavur village near Chennai on April 20, 2016. Waste from the milling of white rice is the latest superfood to hit the U.S. market. (ARUN SANKAR/AFP/Getty Images)
Business & Economy

For nearly a century, bran as a food ingredient has been solely within the purview of boring, high-fiber breakfast cereals like whole wheat bran flakes, all-bran, and oat bran. One company is challenging the food industry to rethink what bran can do for the human race.

Bran is the brown outer layer found on all cereal grains. It is the “whole” part of the whole grain. Until recently the food industry has focused on wheat bran and oat bran, and raisin bran is about as exciting as the formulations got.

If you haven’t heard of rice bran, this is likely because only 1 percent of the available rice bran in the world is currently utilized for the human food market.

RiceBran Technologies is adding the option of rice bran to the bran family of ingredients. Rice bran offers consumers an alternative that is non-GMO, non-allergenic, and incredibly nutritive. These are attributes in high demand by consumers today. It is also a by-product of milling brown rice into white rice that had been going to waste.

If you haven’t heard of rice bran, this is likely because only 1 percent of the available rice bran in the world is currently utilized for the human food market, while only 10 percent is used for animal food, according to Dr. Robert Smith, chief operating officer of RiceBran Technologies, a company that recovers rice bran and turns it into useful food ingredients. Smith was speaking in response to a question from Epoch Times on a company earnings call Aug. 11.

The biggest reason rice bran has been wasted until now is that the lipase enzyme in rice bran causes the product to go rancid within 24 hours unless it is stabilized, and few companies have the technology to recover the highly nutritious ingredient, nor the tenacity to attempt to break open a new market for it. However, the world’s rice millers produce 60 million metric tonnes of rice bran yearly, according to RiceBran’s CEO and president, John Short.

Based in Scottsdale, Arizona, RiceBran Technologies is a global leader in the manufacture of rice bran based on its proprietary bran stabilizing technology that uses enzymes to preserve the nutrition. Some of the other techniques used by competitors involve chemicals, microwave heating, and variations of the same. According to a RiceBran Technologies public filing, the other techniques don’t work as well to preserve the quality and flavor of the bran.

While wheat and oat bran cereals have been marketed mainly for their fiber, which is great for keeping digestion regular, RiceBran Technologies has attempted to leverage a variety of health claims and uses for the ingredient.

Seventy percent of the nutritive value of the rice is actually in the bran layer, which includes a small portion of germ. In addition to the fiber, rice bran has a balanced amino acid profile, and is a rich source of vitamins, minerals, Omega 3, 6, and 9 fatty acids, and antioxidants, according to the USDA.

The food industry is steadily moving in the direction of formulating products that speak to their consumers’ health concerns, and companies like RiceBran Technologies are positioning to cash in on these trends. The growth in these categories of the food industry is significantly higher than the overall food industry growth trend of 3.9 percent calculated by Technomic.

The U.S. market for natural, organic, and functional foods grew more than 10 percent and exceeded $110 billion in 2014, according to the 10-K. Looking ahead, market research firm MarketsandMarkets predicts the functional food ingredient market to grow by 6 percent annually until 2020. Organic and natural food is also expected to continue its growth trend.

Functional foods are foods that contain an ingredient (such as rice bran), which adds a health-promoting or disease preventing function. Examples are probiotic yogurts and energy drinks, or products marketed as high protein to satiate appetite. Nutraceuticals are another category in which the company sees potential. These are foods with a medicinal benefit, often dietary supplements.

Rice bran can be used in a large number of applications in the food industry, from functional beverages, to protein bars, to snacks, to grocery products like pasta and crackers. There is also a lot of potential for rice bran to be used as a filler in blended meat products, and in breading and batters.

The most popular rice bran derivative currently is rice bran oil, which is growing in popularity as an alternative to soy, canola, or palm oil for deep-frying and regular cooking. Chipotle Mexican Grill uses rice bran oil as part of its commitment to avoid food produced with genetically modified seed, and the oil is gaining market share in India and other Asian countries, where many see it as an alternative to olive oil.

Short sees the greatest potential in rice bran for human food, where it generates the highest margins for the company. This is moving away from an earlier focus on the animal nutrition market.

Baruch Halpern, a board member for RiceBran Technologies, said theoretically the market for rice bran as a human food could be really big. “We have the market to ourselves right now,” he said.

“Rice bran is probably the world’s most squandered plant protein source,” wrote Henk Hoogenkamp, a protein expert and board member for RiceBran Technologies, in an email. “In a way it is a disgrace, and utilizing this source of plant protein can very much ease potential emerging food shortages as the world population keeps growing with about 80 million net-born people each year.”

Part of the challenge, according to Short and Halpern, is lining up the logistics to obtain a steady supply of rice bran that can be stabilized in time to preserve its nutrition. It requires either installing technology at the rice milling factory, or having a company facility nearby to handle the bran.

RiceBran Technologies currently sources from two rice millers in California, one in Louisiana, and from various millers in Brazil where the company owns a rice bran oil processing factory.

Revenues for RiceBran Technologies in the second quarter of this year were $10.5 million, with the company’s U.S. portion of business earnings reaching a record high of $8.8 million.

Losses for the same quarter were $8.1 million, which included a $3 million goodwill impairment on their struggling manufacturing facility in Brazil, as well as $1.1 million expense due to a recent proxy contest.

How to Use Rice Bran at Home

Rice bran is the highly nutritious, brown, outer layer of rice, and a byproduct of milling white rice.

Prized for its fiber, protein, vitamins, minerals, fatty acids, non-gluten, and GMO-free properties, the ingredient is gaining in popularity in food industry product formulations, but also as a natural supplement for an extra boost of nutrition at home.

Although its not widely available in stores, Bob’s Red Mill and NOW Foods sell rice bran on Amazon. Below are some popular home uses for rice bran.

Japanese Nukadoko (Fermented Rice Bran)
The Japanese have traditionally mixed rice bran with salt and water, and sometimes red chiles, garlic, ginger, or shiitake mushrooms to create a paste. Whole or cut vegetables are buried in the paste, where they ferment and form healthy probiotics. The paste is reused and “cared for” daily, similar to a sourdough starter.

Add it to your smoothie, yogurt, or morning oatmeal
A spoonful will add a boost of nutrition

Drink it straight up, stirred into water
The nutritional supplement tastes sweet and nutty

Add it to baking
When making muffins, cakes, and breads, people are substituting rice bran for a portion of the flour.