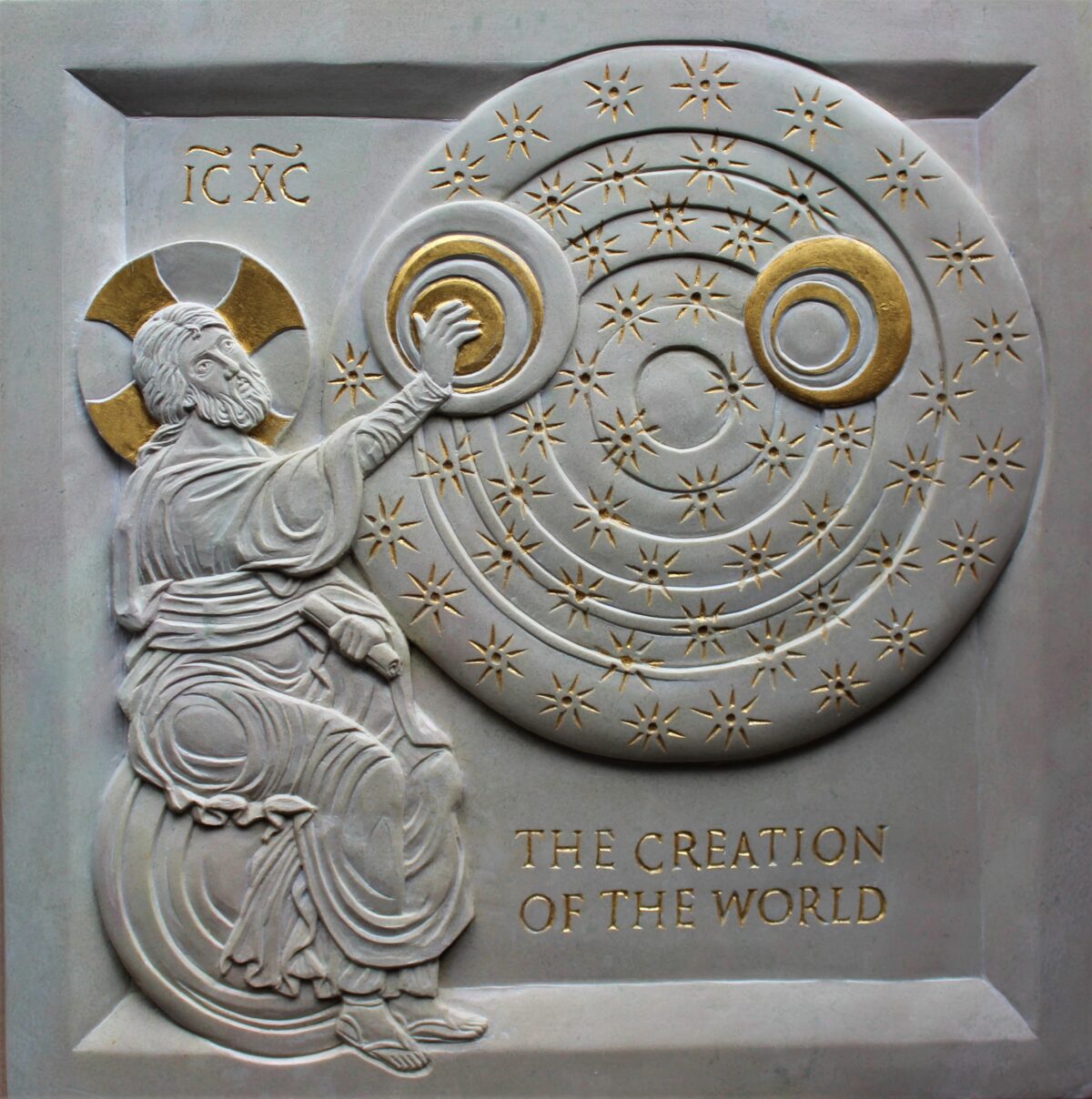 How Icons and Symbols Create Hope and Purpose

Canadian icon carver Jonathan Pageau is bringing symbolism back to life. His brilliant icon carvings hark back to a bygone world that seems relevant only to Christians, yet the icon represents the pinnacle of a symbolic world we’re all immersed in.

Pageau sees symbolism as an antidote to the nihilism that pervades our world.

Just as icons guide Christians in their spiritual life, so secular symbols throughout our traditional culture—as in our songs, stories, and images—can guide us, giving us hope and purpose each and every day.

Pageau is doing his utmost to spread the word that symbols are alive, well, and all around us. Primarily, he carves icons for liturgical purposes and private devotion.

But he’s also created a thriving online community where he teaches iconography, restores the symbolic worldview, and talks with thinkers such as Jordan Peterson who, Pageau says, are trying to “restore a sense of meaning and to help heal the deep nihilism that is infusing our culture right now.”

The Traditional Art of the Church

“Iconography really is a deep well of wisdom and of insight that Christianity developed in its burgeoning state,” he said by telephone. He explained that in the first millennium of Christianity, the church developed a sacred visual language that, although not mandated, spread throughout the Christian world.

Christians visiting churches, from England to Syria, could understand the sacred art they saw even when local styles differed, as there was a clear iconographical language that crossed cultures.

Pageau believes that iconography could be called the traditional art of the Christian church.

During the Renaissance, the Western church slowly moved away from that transcendent medieval visual language and began making realistic art full of gestures and emotions.

He faced two problems. First, he grew up Protestant and image-making was taboo. Secondly, he found postmodern art to be cynical and ironic. All he wanted to create was something real and tangible but, in the postmodern art world, that was impossible.

One day he took all his art and threw it away, saying to his wife that he’d never make art again. She laughed, and told him that was not quite true, for she felt sure he would.

Then he discovered medieval art. “I really fell in love with the [visual] language; I thought it was amazing.” He could see the Bible stories in the art. And he noticed how the artists created patterns of meaning that he likens to a sacred algebra, where they took elements from one image and then transposed them in another.

Pageau became disappointed that this type of art no longer existed. Then he found that in Eastern Orthodoxy, the tradition had been preserved and developed.

Researching Eastern Orthodoxy, Pageau resonated with its theology and practices, particularly its more mystical approach to Christianity—so much so that he eventually converted to Eastern Orthodoxy.

Making art in the Eastern Orthodox tradition solved both his problems. “This type of art was completely integrated into the social fabric. It wasn’t just arbitrary images,” he said. He found that Eastern Orthodoxy had a well-developed theological explanation of why icons existed, and he was now making objects for a sacred purpose: to be used in the church or in private devotion.

Pageau took a university-level course in Eastern Orthodox theology with iconography expert Father Stephen Bigham, who mentored him in the language of iconography.

Pageau first started carving in his spare time because it was something he loved doing. When his bishop saw him carving, he asked Pageau to make him a panagia, the pendant featuring the Virgin Mary with the Christ Child that Eastern Orthodox bishops wear when giving Divine Liturgy.

He’d never made a miniature before, so he contacted a Serbian carver who guided him through the process, which took several days. Pageau laughed when he said, “He was ruthless with me. It was wonderful.” His mentor’s feedback helped him improve.

Finally, when he felt he’d done his best, he gave the pendant to his bishop after the liturgy. He’d become so lost in the process of making the best carving he could, but his bishop’s reaction woke him up. As his bishop unwrapped the pendant he made a gesture of reverence, crossing himself and bowing slightly. Pageau was taken aback. “My bishop wasn’t seeing my artwork at that moment. … He was seeing the Virgin.” he said.

It was all Pageau had hoped for. He realized that his bishop would wear the object he’d made and that it would follow the bishop through his spiritual life, including his church services.

He also realized the price of such reverence. “No one will have a gesture of reverence in front of a Picasso painting,” he said. To access that reverence, he had to let go of his pride and his desire to own the language in the image, to let go of any notion that he was the one doing the work rather than its coming from the divine. He welcomed the trade-off.

Paintings are the main type of church iconography, but carved icons are often used for their durability, especially for objects that need regular handling or for furniture. Christians use small carved icons in the home to help them pray and to remind them of a saint.

Pageau makes icons mostly in stone or wood—from personal pendants and jewelry to Gospel covers, reliquaries, and devotional statues, to furniture and architectural church carvings. For his stonework, he carves into a light-colored soapstone he imports from Kenya.

Pageau’s work tends to be most influenced by Byzantine art, similar to those works that would have existed in 11th- and 12th-century Constantinople. The Byzantine style is steeped in theological meaning. One only has to look in Byzantine churches to see the golden mosaics full of Christian symbols and stylized figures that look out at worshipers, to inspire and deepen their faith. Byzantine artists often decorated their works with jewels, enamels, metalwork, and carved ivories, to name a few.

But Pageau is not a purist. He’s inspired by the different threads of the Christian tradition, and he makes art that shines with the best of what Christianity has to offer. For example, his work may be influenced by early Gothic art, Romanesque art, or Coptic, Byzantine, Russian, Serbian, or even Armenian images, depending on what combines to create something that is both beautiful and recognizable.

In one icon, for instance, he may use decorative elements such as a basma (a thin sheet of metal, often tin or sometimes silver), which is embossed or engraved with patterns. Russian iconographers nailed the basma directly onto the icon as a frame or as a background for the icon itself. And in another, he may look to the early Gothic style of Christian art, which originated in Île-de-France (the region around Paris), that is generally characterized by graceful figures with elongated limbs and expressions that were more human than previous styles. Again, each figure or image was made to bring the viewer closer to God.

Pageau is not making carbon copies of the past; there’s flexibility in the icon tradition. He likens making icons to writing traditional poetry. “You can recognize a sonnet by its form. It’s the same with an icon. You can recognize an icon of the ‘Transfiguration of Christ’ by certain elements, but then there’s some play in how that comes together,” he explained.

Pageau knows what elements should be used in an image to convey its inner language so he can change the style and harmoniously include some surprising elements. For example, two traditional symbols of the transfiguration of Christ–rays of divine light that emanate from him and a vertical ellipse called a mandorla, which surrounds Christ much like a halo—both indicate that he is an enlightened being.

Pageau decides the iconography of each image he makes after understanding his patron’s needs. The complexity of the design is directly related to the cost. Pageau draws the icon, and the design is agreed to with the patron. Pageau’s assistant then traces the design onto the wood or stone and carves out the background by hand. Pageau hand carves the details and then embellishes the icon with mosaics, metalwork, or collages of semiprecious stones, such as lapis lazuli or serpentine, depending on the carving’s complexity.

Sometimes when Pageau works, he’ll find that all of a sudden certain things start happening in his life that are related to the saint whose image he’s carving, as if the saint is somehow reaching out to him. In those moments, he feels that he’s being pushed forward, closer to the mystery and a deepening of his faith.

A priest may bless the finished icon, depending on the patron’s request.

Pageau believes that nothing exists for its own sake; everything in the world exists for a reason, and each thing forms a giant web of meaning. Symbolism can be seen as the fabric of reality, and when we see that, it can inform our worldview.

Symbolism is “the very structure of our experience,” Pageau said, and the pattern by which we are able to attend to things. When symbolism is woven into songs, stories, and images, and the more it’s condensed, we’re even more able to perceive the pattern.

Pageau explained that when we understand that we have daily rituals (we move with purpose every day, from putting on our socks to having a family meal), then we can see that religion ultimately takes us to our higher purpose by helping us participate in the patterns of reality. “And so symbolism is inevitable in your life,” he said.

He understands that when we are guided by the purity of religious images, biblical stories, and the morals in myths and fairy tales—which all contain condensed symbols—they can help us make sense of the more messy parts of our everyday life and help us discern truth from ornament.

“Symbolism is really a way out of the morass of our contemporary world,” he said.

To find out more about Jonathan Pageau’s art, visit PageauCarvings.com