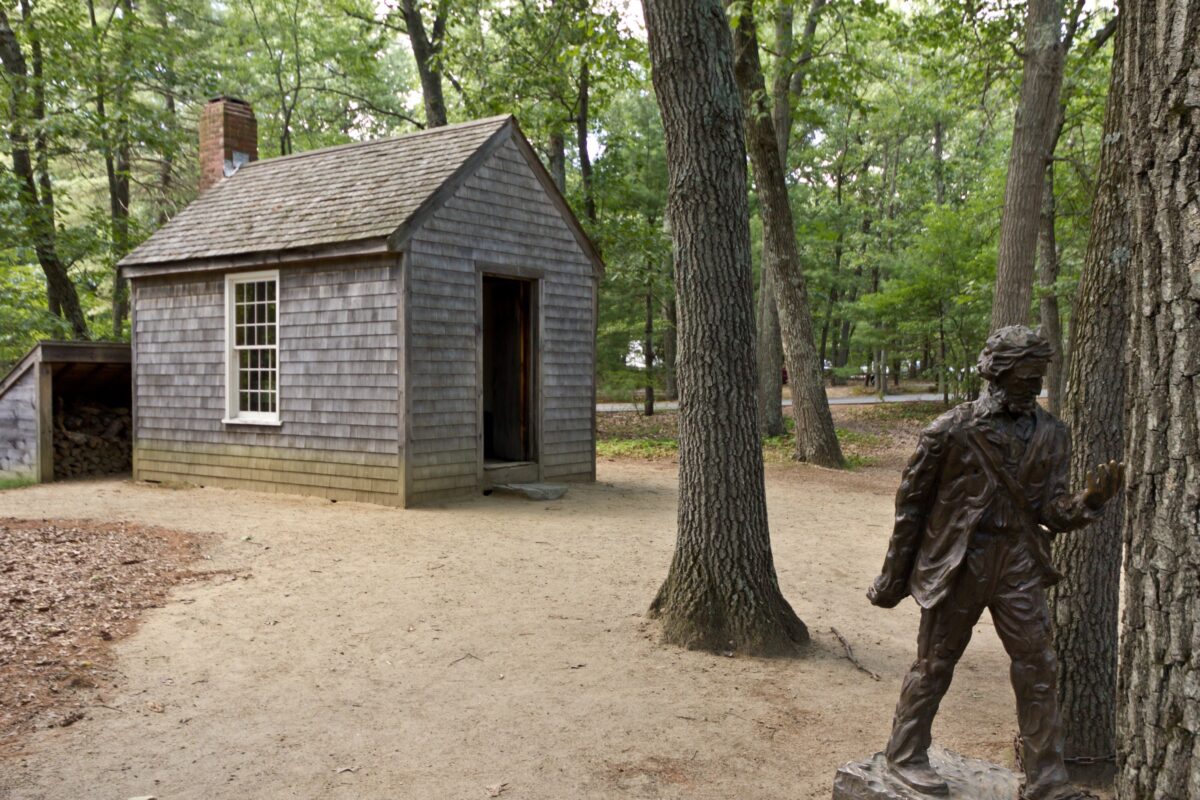 Replica of Thoreau’s cabin and a statue of him near Walden Pond. (RhythmicQuietude at en.wikipedia)
American Essence

Henry Thoreau has inspired many Americans with his writings, more of which have surfaced recently
BY Andrew Benson Brown TIMEMay 4, 2022 PRINT

Henry David Thoreau accomplished a great deal in his short but busy life as a philosopher, activist, and naturalist. His profound influence as the grandfather of environmentalism and nonviolent resistance movements is difficult to overstate. As if this were not enough, he even improved the quality of pencils by innovating a method of binding graphite with clay.

His own century largely ignored him, though. The reigning opinion about Thoreau in his day—at least according to his fellow citizens of Concord, Massachusetts—was that he was an idle good-for-nothing: a man who, with hardly a penny to his name, spent his time scribbling in notebooks and decrying perceived injustices instead of making a living.

With our hindsight, it is easy to blame Thoreau’s contemporaries for tunnel vision. But to look at the outward events of his unorthodox life, one would not think him a likely candidate for future greatness. At the age of 27, he was something akin to the modern-day college graduate who, unable to find suitable employment, still lives with his parents. It was at this age, though, in 1845, when he embarked on the experiment for which he would become world famous: moving to Walden Pond to live in solitude.

The book that resulted from this experience, “Walden: Or, Life in the Woods,” has been called the bible of American nature writing, and for good reason: it is a fount of timeless wisdom. Proverbial observations and advice on living flow forth and almost seem to have been written by some bearded seer of ancient Israel or Athens. A brief sampling of these may allow one to get a sense of Thoreau’s worldview:

“Rather than love, than money, than fame, give me truth.”

“If you have built castles in the air, your work need not be lost; that is where they should be. Now put the foundations under them.”

“If a man does not keep pace with his companions, perhaps it is because he hears a different drummer. Let him step to the music which he hears, however measured or far away.”

Thoreau did more than simply write such principles—he lived them. A disciple of Ralph Waldo Emerson, he was intent on practicing the Transcendentalist ideals his mentor wrote about: nonconformity, self-reliance, and seeing God in the workings of nature. The first of these doctrines, nonconformity, got him into trouble when he was jailed for refusing to pay his taxes, unwilling to pay a government that supported slavery and the war with Mexico. The ordeal would prompt him to write an essay, “Civil Disobedience,” that advocated peaceful resistance to immoral government policies—a treatise that would be read by both Gandhi and Martin Luther King Jr. While Thoreau’s dissenting disposition earned him the ire of his fellow citizens, this did not seem to bother him a bit. As he wrote in the essay, “Any man more right than his neighbors constitutes a majority of one already.”

He was living at Walden Pond when he was jailed for tax evasion, having journeyed to town on errands. Other than this, his two-year residence in nature was without public incident. “Walden” chronicles Thoreau’s time spent building a cabin, farming, fishing, and observing flora and fauna in great detail. In a book full of so many recognizable quotes, one sentence is perhaps more famous than the rest—indeed, one of the most famous sentences in all of American literature. In the second chapter, he provides the reader with his mission statement: “I went to the woods because I wished to live deliberately, to front only the essential facts of life, and see if I could not learn what it had to teach, and not, when I came to die, discover that I had not lived.”

Simple living is, above all, inexpensive. In the book’s first chapter, “Economy,” he catalogs the cost of the resources used to build his cabin ($28.12, or slightly less than $1,000 today) and grow crops ($14.73—a little more than $500 now). Though he used hired labor to plough his two-and-a-half-acre field, his own shovel did the rest. He earned back $23.44 of his expenses in his first year of bean farming (about $800). Though his net profits were modest, he concluded that, “considering the importance of a man’s soul today, … I believe I was doing better than any farmer did that year.” While he remarks that his income was “better” the second year, he does not put a number to this success. In addition to farming, he also took odd jobs as a carpenter, surveyor, and mason. In all, Walden’s balance sheet showed that a spare and rustic lifestyle was not as impractical as his neighbors thought.

It is still possible to visit Walden Pond today. Thanks to conservation efforts by rock star Don Henley (founding member of The Eagles), its 335 acres of preserved land sits nestled around a community that is far more urbanized than it was two centuries ago. It is not difficult to imagine what Thoreau would have thought of the two busy highway routes that intersect the reserve. Once in the park, though, it is as if stepping into the past: one can walk a network of nature trails to visit Thoreau’s cabin, bean field, and swimming cove, or boat on the waters where he fished under moonlight. His cabin has been precisely reconstructed based on his own descriptions of its materials and interior design. Thoreau did not hesitate to note the moral effects of his specific furniture: “I had three chairs in my house; one for solitude, two for friendship, three for society.”

After leaving Walden Pond, he would continue to document his thoughts in his journal, publishing two books and numerous essays before dying of tuberculosis at the age of 44. His writings, many of them posthumously published, languished in relative obscurity for decades, and even those who knew Thoreau best thought that he had squandered his talent. In his eulogy of his former pupil, Emerson lamented, “I cannot help counting it a fault in him that he had no ambition. Wanting this, instead of engineering for all America, he was the captain of a huckleberry-party.” It was not until the 20th century that Thoreau’s important legacy would be acknowledged, a reappraisal that Emerson alluded to when, in the same eulogy, he prophesied, “The country knows not yet, or in the least part, how great a son it has lost.”

It is a legacy that continues to bear fruit in unexpected ways as, recently, a “new” book was unearthed. While Thoreau always described the natural world with precision, his later writings took a more overtly scientific turn. He collected plant specimens in his hat during long walks and kept a detailed botanical catalog of hundreds of species. Planning to turn these observations into a book-length study, he was still working on this project when he died. For nearly 150 years, this final chapter of his story ended there. But then, an amazing thing happened: A determined scholar, Bradley Dean, recovered these widely dispersed charts and notes, painstakingly organized them, and deciphered their nearly illegible handwriting. In 2000, Dean published this last, unfinished manuscript under the title “Wild Fruits,” which helped revive Thoreau’s reputation as a serious naturalist.

Originality and influence often arise in surprising places, and in his lifetime the recluse of Concord embodied his own well-known observation: “To be great is to be misunderstood.” But time brings all things to light, and thanks to his compulsive journaling habits, we are now in a position to understand Thoreau better than almost any of his contemporaries did. Millions of people continue to look to him as a source of wisdom for navigating the complexities of the modern world, inspired to simplify their lives. And since the world is not becoming any less complex, this interest shows no sign of abating.