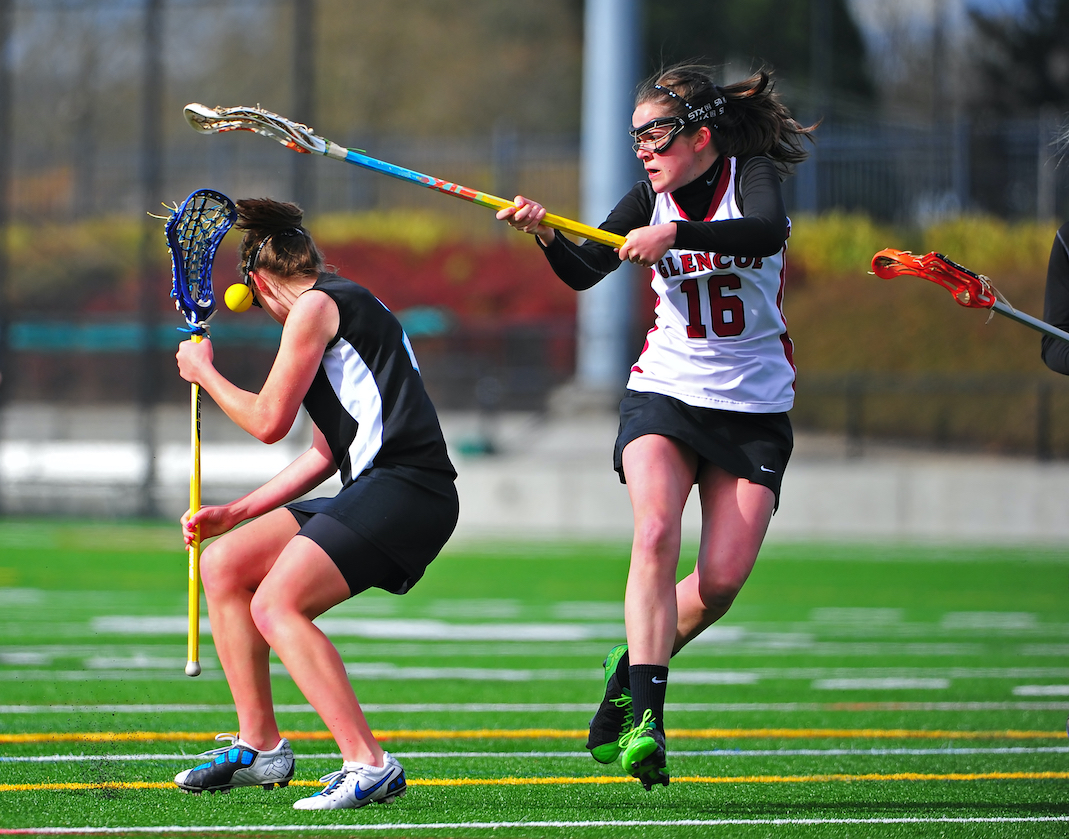 The GI tract actually can be injured secondarily to a concussion. (James A Boardman/Shutterstock)
Brain Health

How Having a Concussion Can Damage Your Digestion

The brain–gut connection means this little-known side effect of brain injury can cause big problems
BY Jennifer Margulis TIMEJuly 31, 2022 PRINT

Several years ago, Brooke Gottlieb started having a plethora of gastrointestinal digestive issues that baffled her doctors. In high school at the time, Gottlieb was a competitive lacrosse player. She was used to dealing with sore muscles, bruises, and joint pain.

Her tummy troubles began after she had a serious concussion playing lacrosse. But it took her and her parents several years to realize that the stomach issues were actually connected to the brain injury.

It didn’t help that the conventional doctors she visited said that the severe bloating, constipation, and inflammation were the fault of a combination of “bad genes” and stress. More than one gastroenterologist confirmed this, diagnosing Gottlieb with irritable bowel syndrome and colitis and telling her that reducing her anxiety would fix the symptoms.

It wasn’t until recently that Gottlieb—with the help of a functional medical doctor she went to because her symptoms didn’t improve—realized the gut issues resulted from the severe concussion she sustained in high school.

The brain doesn’t only talk to the organs, explained Dr. Robert Lowry, a San Antonio-based neurologist who specializes in concussions and other brain injuries.

“The organs talk back to the brain,” he said.

According to Lowry, when we have a concussion, it can affect other systems.

“The GI [gastrointestinal] tract actually can be injured secondarily to a concussion,” he said. “The hypothalamus [which links the nervous system to the endocrine system] can be injured, and then it’s not telling the rest of the body what to do correctly.”

Every year, some 52,000 people die from concussions, 1.365 million are treated and released, and 275,000 need to be hospitalized for their symptoms, according to the 2019 book “Concussion, Traumatic Brain Injury, mTBI Ultimate Rehabilitation Guide.”

The most common cause of an injury to the brain is a fall, followed by a motorcycle or automobile accident, and then a physical assault, with or without a weapon, the authors write.

Sports injuries are another frequent cause.

Many of the people suffering from brain injuries each year are children. More than 44 million youths participate in sports, and some 1.1 million to 1.9 million of them suffer a concussion, according to a 2016 study published in the journal Pediatrics.

According to the Centers for Disease Control and Prevention, side effects from concussion include balance problems, blurred vision, brain fog, dizziness, fatigue, depression or increased emotionality, headaches, memory loss, nausea, and vomiting.

But what many people don’t realize, according to Lowry, is that concussions can also result in what appear to be non-neurological injuries. Even most doctors don’t know that a hit to the brain can be a hit to your gut.

According to a 2009 study conducted by researchers from the University of California–San Diego and published in the Journal of Neurotrauma, one of the impacts of a traumatic brain injury can be increased intestinal permeability, also known as “leaky gut.”

Normally, the lining of our intestines is semi-permeable and helps to absorb water and nutrients from our food into the bloodstream. When a patient is suffering from leaky gut, the intestines allow more than just food and water into the bloodstream. Bacteria that shouldn’t be in the bloodstream, as well as other toxins, may seep through. This can cause increased inflammation, poor digestion, and fatigue, among other symptoms.

In the study, the scientists tested mice. Six hours following a concussion-induced injury, they observed the mice had an increase in intestinal permeability, along with significant decreases in two important tight junction proteins: ZO-1 and occludin.

Compared to the control group, the concussed mice had a 49 percent decrease in tight junction protein ZO-1 and a 73 percent decline in occludin.

Low levels of tight junctions and occludin are associated with a weak intestinal barrier, ultimately leading to increased intestinal permeability that allows toxins and pathogens to enter the bloodstream.

From Mice to Flies

In a 2015 study, published in the journal Fly, a team of scientists from the University of Wisconsin–Madison gave blue dye to a group of flies to ingest, before injuring their brains.

In previous research, after lab-induced head injury, the blue dye would leak from the intestines and disperse throughout the bodies of certain flies, turning them so blue they resembled the cartoon character Smurfs. These flies were identified as having a “Smurf phenotype.”

In this experiment as well, flies with a Smurf phenotype nearly all died within 24 hours following the brain injury, suggesting that genetic susceptibility to intestinal leakage is also a factor.

The scientists further found that feeding flies molasses following a brain injury caused their glucose levels to skyrocket and led to high incidents of hyperglycemia and death.

Conversely, flies that were fed only water after being injured did much better. In some fly lines, water reduced the death rates by more than 50 percent.

A 2022 study, published in the journal Brain, Behavior, and Immunity—Health, studied college football players from Rice University to learn about the brain–gut connection in humans. In this study, researchers collected blood, stool, and saliva from 33 athletes at various times throughout the athletic season.

More samples were taken from the athletes who had concussions throughout the year to assess potential changes in their gut microbiota.

The study found that the young men who experienced a concussion had a significant decrease in certain bacteria normally abundant in the stool samples of healthy individuals. The blood samples of the participants who were concussed also revealed an increase in certain proteins in the blood.

The bacteria that were significantly depleted in concussed participants included Eubacterium rectale and Anaerostipes hadru.

These bacteria appear to have beneficial anti-inflammatory properties. Lower levels of both species are associated with inflammation brought on by head injury.

From this experiment, the research team concluded that even just a single concussion can disrupt the gut microbiota.

Choose Quiet or Music: Resting in a quiet, dark room, at least until your head stops pounding and your headache is gone, expedites brain healing. Silence is thought to help heal a concussed brain. But listening to music may also help. A 2021 study from the journal Brain Sciences found that music therapy helped to heal concussions by reducing stress. Stress and emotionality are often increased post-concussion due to the brain regions involved in emotion regulation becoming injured. For some, healing music (which you can find on YouTube) seems to induce positive emotions and support recovery.

Schedule an Acupuncture Appointment: Though your Western-trained neurologist might not suggest it, alternative practitioners point out that acupuncture is one of the oldest and most effective treatments for neurological injury. According to a 2017 study by a group of researchers from the Institute of Traumatic Brain Injury and Neurology at Pingjin Hospital in Tianjin, China, acupuncture improves brain signaling pathways and increases healing by promoting blood circulation at the site of impact.

Go for a (Hyperbaric) Dive: Hyperbaric oxygen therapy can be deeply healing for the brain. According to researchers from the Institute of Hyperbaric Medicine at Assaf Harofeh Medical Center in Israel, the extra oxygen improves blood flow throughout the body. Increased blood circulation helps to repair and regenerate the brain.

Exercise Moderately: Most coaches will tell their athletes to rest after a concussion. While this makes sense if you’re experiencing headaches, dizziness, and difficulties with balance, some emerging research suggests that moderate exercise following a concussion may reduce symptoms and lead to a faster recovery. The key is to listen to your body, but it now seems that complete rest following a concussion may actually increase symptoms and prolong recovery.

Healing Your Gut After a Concussion

If the gut has been affected by a concussion or for any other reason, fixing tummy troubles will also help to heal the brain. You already know that healthy eating matters.

Johns Hopkins Medicine highlights the importance of consuming enough whole fruits and vegetables, which contain fiber that feeds beneficial gut bacteria. But there’s more you can do.

Keep It Clean: As a 2017 study in the Journal of Translational Medicine explains, processed foods promote the growth of unhealthy bacteria that cause excess inflammation. It’s especially important to avoid artificial sweeteners typically found in diet sodas. Eating organic, to avoid ingesting gut-damaging endocrine-disrupting pesticide and herbicide residues, especially glyphosate, is important, too.

Get a Probiotic: While probiotic supplements are still a subject of debate, and some of their benefits may be over-hyped, according to the National Center for Complementary and Integrative Health, probiotics in general help promote gut health. Probiotics may help to improve an array of gastrointestinal issues, including leaky gut and ulcerative colitis. The best way to get probiotics is through food sources. Organic plain yogurt (cow, sheep, goat, or coconut), kimchee, sauerkraut, and kombucha are all probiotic foods that may help.

Take a Bath. Not only can Epsom salt baths be beneficial for improving nervous system function, they can also boost gut health by decreasing inflammation and flushing out toxins, according to a 2018 study in the American Journal of Pharmacology and Pharmacotherapeutics.

Hydrate for Health: A hydrated gut is conducive to proper intestinal function. It’s important to stay hydrated in order to have regular bowel movements, which help to remove harmful pathogens from the body. Try to drink high-quality filtered water, make your own organic fresh fruit and vegetable juices, or choose organic beverages with no sugar added packaged in glass bottles.

Avoid Antibiotics: Antibiotics, including many that are commonly prescribed, kill beneficial bacteria as well as pathogenic ones. This can further cause or worsen post-concussion gut issues. If you need an antibiotic, try natural remedies first. Garlic, for example, is “a powerful remedy to protect against infections of many bacteria, fungi, and viruses,” according to 2015 research by a team of Chinese scientists.