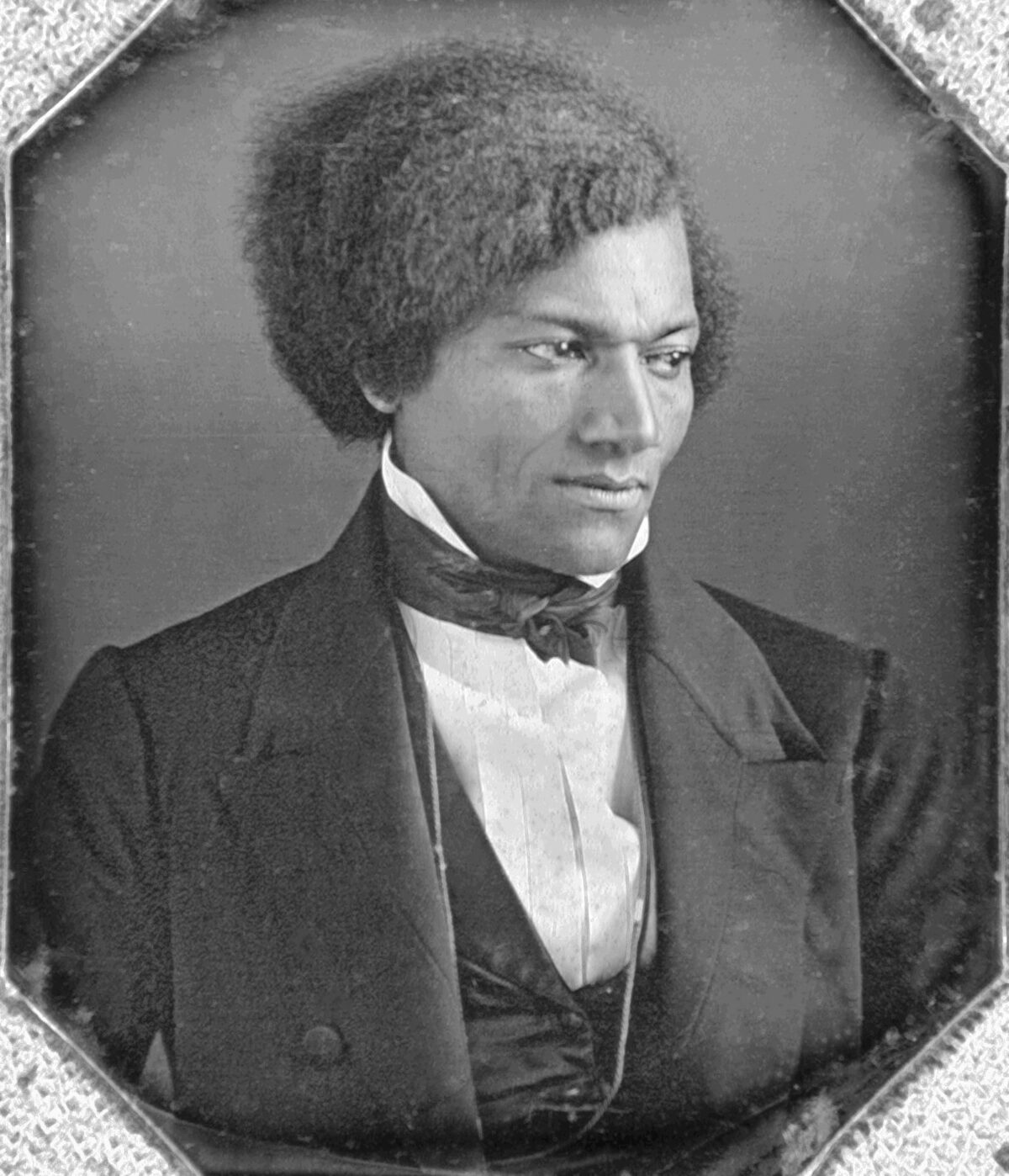 The escaped slave who became a well-known orator and author spoke against slavery with faith and conviction
BY W. Kesler Jackson TIMEApril 30, 2022 PRINT

In 1838, a Maryland slave named Frederick Bailey, age 20, escaped from bondage, making use of the recently constructed Philadelphia, Wilmington, and Baltimore Railroad. By rail, Frederick effected his flight in only one day. “A new world had opened upon me,” he wrote later, recalling the moment he first stood upon free soil. “If life is more than breath, and the ‘quick round of blood,’ I lived more in one day than in a year of my slave life.” Later that year, he was married to the free black woman who had helped him escape, and the couple—who had adopted the surname “Johnson”—settled in Massachusetts. Here, Frederick Johnson became a licensed preacher, and in time he and his wife adopted a new last name: Douglass.

In Massachusetts, Frederick Douglass was introduced to The Liberator, William Lloyd Garrison’s weekly paper, which cultivated within him an even more abiding hatred of slavery than he’d harbored before. Douglass had learned to read as a child, thanks to his own ingenuity and some young friends. Of this childhood experience he later recounted:

“The plan which I adopted, and the one by which I was most successful, was that of making friends of all the little white boys whom I met in the street. As many of these as I could, I converted into teachers. With their kindly aid, obtained at different times and in different places, I finally succeeded in learning to read.”

Douglass’ subscription to “The Liberator” marks a watershed in his life. The former slave later explained:

“From this time, I was brought into contact with the mind of Mr. Garrison, and his paper took a place in my heart, second only to the Bible. It detested slavery, and made no truce with traffickers in the bodies and souls of men. It preached human brotherhood; it exposed hypocrisy and wickedness in high places; it denounced oppression, and with all the solemnity of “Thus saith the Lord,” demanded the complete emancipation of my race. I loved this paper and its editor. He seemed to me, an all-sufficient match for every opponent, whether they spoke in the name of the law, or the gospel. His words were full of holy fire, and straight to the point.”

Not long after subscribing to “The Liberator,” Douglass attended a lecture delivered by Garrison in 1841. Though he “was never loud and noisy,” Garrison certainly did not mince words. Using the Bible as “his text book,” he preached that “ministers who defended slavery from the Bible, were of their ‘father, the devil’”—and that “those churches which fellowshipped slaveholders as Christians, were synagogues of Satan, and our nation was a nation of liars.” To Douglass, this fearless and sharp-tongued crusader against slavery was akin to Moses, “raised up by God, to deliver his modern Israel from bondage.” Douglass had despised slavery before; hearing Garrison, and reading his words in “The Liberator,” “my hope for the ultimate freedom of my race increased.” Little could Garrison have known as he lectured that day that he was preaching to the man who would become the most famous black figure in 19th-century American history, and possibly all American history.

Despite his fears of public speaking, it wasn’t long before Frederick Douglass was sharing his own story in public until, in 1843, he was invited by Garrison’s American Anti-Slavery Society on a speaking tour of the country with a group of other lecturers. For six months, the tour addressed audiences on the topic of slavery. More than once, Douglass was physically attacked by crowds (once, he was beaten so badly that his hand was broken; it never fully healed). Then, in 1845, Douglass published his autobiography—“Narrative of the Life of Frederick Douglass, an American Slave”—and it quickly became a bestseller.

The work reveals much about slave life at the time. Though separated from his mother, as a child Douglass yet resided within 12 miles of her, but even this short distance only afforded his seeing her “four or five times” in his whole life—and then only when she braved escape (and the punishment of the whip) on foot, during the night and after a long day’s work, before hurrying back to make it to the fields by sunrise. “She would lie down with me, and get me to sleep,” Douglass wrote later, “but long before I waked she was gone.” Douglass provides a vivid account of a bondman’s daily grind, painting a scene of privation and fatigue. Some of Douglass’ descriptions shocked his reading audience. Other episodes curdled the blood.

After publication of his “Narrative,” Douglass was advised by friends that his former master, having been made aware of his whereabouts and new name by Douglass’ book, might try to nab him. With this in mind, Douglass spent several years touring Ireland, England, and Scotland. In Ireland, he exulted in the equal and “kind” treatment he received, though he did note the extreme poverty of the Irish. “I see much here to remind me of my former condition,” he wrote for the “Liberator” back home, “and I confess I should be ashamed to lift up my voice against American slavery, but that I know the cause of humanity is one the world over.” While overseas, he often lectured to packed venues. So popular was Douglass in Britain that supporters raised the money to officially buy his freedom. In 1847, Douglass returned to the United States a legally free man.

Producing a literary sensation like “Narrative of the Life of Frederick Douglass” might have been considered the zenith of the author’s public career, but Douglass was just getting started. From the basement of the Memorial AME Zion Church in Rochester, New York, Douglass began printing a newspaper of his own, The North Star; the publication’s name was a reference to the directions provided to runaway slaves seeking freedom: “Follow the North Star!” “The North Star” now competed with “The Liberator” and other antislavery publications, and the year of its publication marked a split between Garrison and Douglass—though not just over subscribers.

On September 22, 1848—the anniversary of his emancipation—Douglass published an open letter to his old slave-master. Parts took on the style of a routine update. Others formed a rebuke:

“There are no slaveholders here to rend my heart by snatching [my children] from my arms, or blast a mother’s dearest hopes by tearing them from her bosom. These dear children are ours—not to work up into rice, sugar and tobacco, but to watch over, regard, and protect, and to rear them up in the nurture and admonition of the gospel—to train them up in the paths of wisdom and virtue, and, as far as we can to make them useful to the world and to themselves. … You well know that I wear stripes on my back inflicted by your direction; and that you, while we were brothers in the same church, caused this right hand, with which I am now penning this letter, to be closely tied to my left, and my person dragged at the pistol’s mouth, fifteen miles, from the Bay side to Easton to be sold like a beast in the market, for the alleged crime of intending to escape from your possession.”

“I shall make use of you as a means of exposing the character of the American church and clergy—and as a means of bringing this guilty nation with yourself to repentance. In doing this I entertain no malice towards you personally. There is no roof under which you would be more safe than mine, and there is nothing in my house which you might need for your comfort, which I would not readily grant. Indeed, I should esteem it a privilege, to set you an example as to how mankind ought to treat each other. I am your fellow man, but not your slave.”