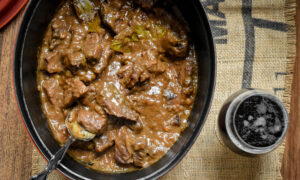 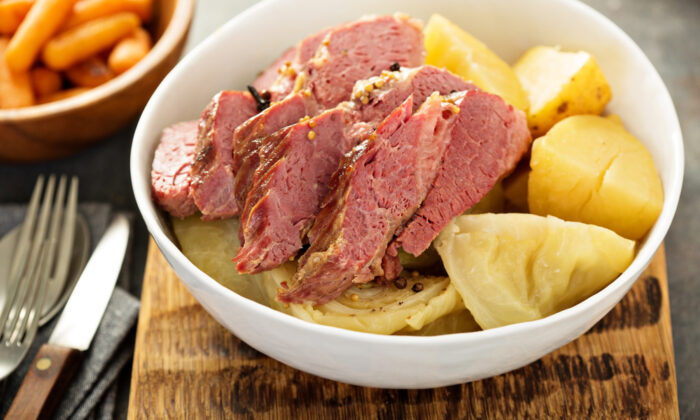 This now-iconic dish started with Irish immigrants in Jewish neighborhoods in Boston and New York, cooking corned brisket from the deli Irish-style: in a pot with cabbage and potatoes. (Elena Veselova/Shutterstock)
Recipes

How Corned Beef and Cabbage Became an American Irish Delicacy

I have always lived among the Irish. I grew up in Boston, a legendary Celtic hub, and settled in Missoula, Montana, 100 miles downstream from America’s most Irish city per capita: Butte. I used to credit my affinity for that feisty tribe to this coincidental geographic overlap, but now I see a deeper connection. And you can see it by looking no further than the nearest bowl of corned beef and cabbage.

For a time, Ireland exported some of the world’s finest corned beef. It was a pricey treat, and it never caught on in the with the frugal Irish, who preferred lamb and pork to beef anyway. Corned beef and cabbage became an American Irish delicacy in Boston and New York, where immigrants from the Emerald Isle found themselves in Jewish neighborhoods, with the means to bring home a corned brisket from the local delicatessen once in a while and cook it Irish style: in a pot with cabbage and potatoes. As such, it resembles a meaty version of a cabbage-based borscht my Jewish ancestors made in Ukraine.

Leopold Bloom, the co-hero in James Joyce’s Ulysses, was a lot like a bowl of corned beef on St. Paddy’s Day. Like the dish, Mr. Bloom was the product of Jewish and Irish parentage, which Joyce used to illuminate the parallels he saw in the struggles of the Irish under British rule and the Jews trying to escape Egypt. In the United States, the Irish Americans and Jews shared a sense of exile from their respective homelands.

And with their North American countrymen, those same Irish Americans shared a resentment of British rule, which helps explain their apparent enthusiasm for American Revolutionary history. How else can we explain the obsession, among the Irish of Boston, with Evacuation Day, which was signed into law in green ink in 1941? Evacuation Day commemorates the end of the 11-month siege of Boston by the British, when Gen. George Washington fortified Dorchester Heights and sent the Continental Army packing to Nova Scotia. The official date of this evacuation was March 17, an extremely fortuitous coincidence for anyone wishing to skip work for St. Patrick’s Day, but stymied because it’s not a federal holiday.

The Irish of Montana, meanwhile, are a bit more “Wild West.” Rather than organize to lobby for legal holidays, they simply skip work and walk around with their beers. The gold rush of 1862 had brought them to Butte, which sits on the continental divide, and was once America’s largest city west of the Mississippi. As a young reporter in Missoula, I felt like I’d struck gold myself when I was assigned a story on Butte’s St. Patrick’s Day festivities.

After the parade, revelers raised their pints in massive beer halls and howled in festive crescendos, like “the wave” going around a stadium. It was there that I sidled up to the bar and ate my first bowl of corned beef and cabbage.

Corning was traditionally a way to preserve meat before refrigeration. Tough cuts were cured in sugar and salt, the grains of which were the size of corn kernels. It was a delicacy in England, but since Ireland had lower salt taxes for a time, it became corn central.

Today, corned beef comes in a special can with a key on the outside, which you turn until the can opens. Inside a typical can, you’ll find what would be considered cat food in any other context. Amazingly, it can be made palatable when heated, for better or for worse.

But once you try the salty, stringy taste and texture of home-corned brisket, you’ll no sooner go back to tinned than the British went back to Boston.

Like most contemporary corning recipes, this one calls for a nitrate salt to help tenderize the meat and give it a bright red hue.

Add everything but the brisket to a gallon pot and heat to a boil. Turn it off and let cool to room temperature. Place the meat in the pot with a weight on top to keep the meat submerged. Let it brine, refrigerated, for about a week.

Slice the meat and serve in a bowl with vegetables and broth.

In Missoula, my favorite breakfast joint serves corned beef hash, aka chopped corned beef and potatoes, fried until brown and tossed with scrambled eggs. That, I realized, is the final destination when first we dunk a brisket in that sweet and salty brine.

Scramble the eggs and set aside.

Fish out some meat and potatoes from the pot. Cut them into 1/2-inch cubes.

Heat a pan on medium and add the beef cubes first, along with some oil if there’s not enough fat in the beef. When you smell the beef starting to brown, add the potatoes, and fry for about 10 minutes. Toss in the scrambled eggs, and serve garnished with a four-leaf sprig of parsley.