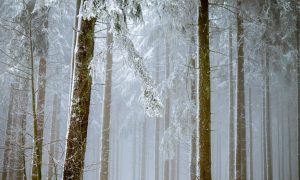 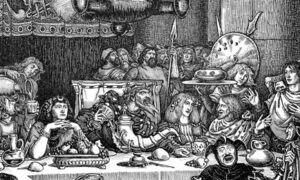 Lessons and Carols: Sir Gawain, a Green Knight, and Us
0 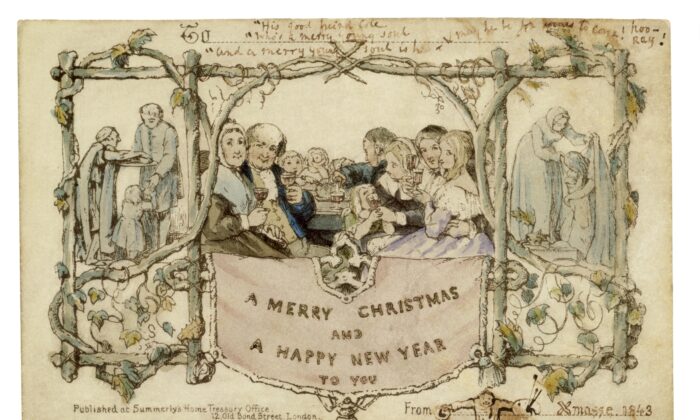 How a Christmas Tradition Came to Be in Victorian England

The 19th century was a period of growing social and geographic mobility in the UK. For the first time, with industrialization and urbanization, people lived and worked farther away from the places where they were born and formed larger but looser social networks. These changes were mediated by adopting new traditions and shared customs, like the exchange of Christmas cards.

The first commercially available type of printed greeting card was the valentine, introduced at the beginning of the 19th century. Although the custom of giving Valentine’s Day gifts, such as gloves to be worn to church on Sunday, or hand-drawn or -written verses or riddles already existed from at least the 15th century.

The exchange of valentine greetings and gifts wasn’t only a romantic custom; it could also be a sentimental and social one: Large households would draw lots to see who would be whose valentine that year (a bit like “Secret Santa” in workplaces today). The diarist Samuel Pepys recorded on Valentine’s Day in 1666 or 1667 that the little boy of one of the servants drew Mrs. Pepys as his valentine:

“This morning, come up to my wife’s bedside, I being up dressing myself, little Will Mercer to be her Valentine; and brought her name writ upon blue paper in gold letters, done by himself, very pretty; and we were both well pleased with it.”

In the mid-19th century, the custom was to make Christmas visits to all of one’s friends and acquaintances, leaving a visiting card—often decorated with Christmas motifs—either ready-printed or hand-decorated with printed scraps, or to write Christmas letters to everybody on writing paper likewise decorated.

The purpose of Henry Cole’s Christmas card was to replace those activities with a mass-produced illustrated card with just enough space for a short greeting, which could be sent by the penny post to all the many people he knew. The penny post, which Cole helped instigate, meant that a card could be sent anywhere in Britain for only a penny.

The design was reproduced lithographically in an edition of 1,000 which were then hand-colored by William Mason, a professional “colorer.”Any cards left over were then sold by Cole’s business partner Joseph Cundall at their emporium, Summerly’s Home Treasury, at 12 Old Bond Street, for one shilling each.

The first Christmas card was very expensive. To put it into context, one shilling was about the daily wage of a working man or the price of a good meal at The Reform Club, London, the exclusive club that Henry Cole frequented.

There are several interesting differences between the design of the card and what we would expect today: Scenes of festive eating and drinking are less common now that cheap and plentiful food and drink are taken for granted in the West. On the card, the central scene of plenty is offset by the side panels showing the hungry being fed and the naked clothed.

The trellis framework with trailing vines, a symbol of abundance with religious overtones, demarcates the separate scenes while connecting them within the same overall design, reinforcing the moral message that material comfort imposes a social obligation to aid those less fortunate, which is personal and communal and not simply the prerogative of the state.

The central scene shows at least three different generations of a (presumably extended) family gathered together. In the 1840s, the average life expectancy was low, between 40 and 45 years (about half as long as today), and infant and child mortality rates were high with about 15 percent of babies dying before their first birthday. Varying, of course, with relative wealth or poverty and social class, living long enough to enjoy grandchildren or great-grandchildren was not taken for granted, and so this idealized scene would have had a sentimental appeal not easily appreciated today.

One of the later criticisms of the card concerned the illustration of a little child being given a glass of wine. Today in the West, we take the availability of clean, safe drinking water for granted, but in 19th-century cities, cholera and typhoid outbreaks were common, and wine or beer were often consumed instead.

How the Christmas Card Became a Custom

A variety of factors came together to create the Christmas card industry, in what the late historian of Christmas cards, George Buday, called “the fullness of time.” One factor was improvements in postal services (the Uniform Penny Post went nationwide in Britain in 1840 and the halfpenny post for single-sheet postcards in 1870), making postage more accessible.

Another development was the establishment of trades and retail outlets to supply relatively nonessential novelties and luxuries to a growing middle class with disposable income and leisure time. Christmas cards began to be sold not only by stationers and bookshops but also by tobacconists, drapers, and toyshops.

The Creation of Christmas Motifs

Many of the early Christmas cards featured flowers, or springtime or summer scenes rather than winter ones. There were two reasons for this: Firstly, many early Christmas card manufacturers had previously made valentines. There was no guarantee that Christmas cards would ever be as popular as valentines. At first, the phenomenon was widely thought to be a passing fad. So instead of commissioning new illustrations and creating new printing plates, they adapted existing Valentine’s Day ones and simply added a Christmas greeting.

Also, sunny, flowery scenes cheered people up during the long, dark, cold winter months before the invention of electric lighting and central heating.

The seasonal Christmas themes familiar to us today spread from other formats to cards a little later—influenced by popular literature: Charles Dickens’s “A Christmas Carol” (1843); “Christmas with the Poets” by Henry Vizetelly, illustrated by Myles Birket Foster (published 1852); and the 1876 edition of “Old Christmas: From the Sketch Book of Washington Irving” by Washington Irving. These books were extremely popular, widely read, reviewed, and frequently reissued.

The second half of the 19th century was the period when today’s familiar Christmas iconography of robins, holly and mistletoe, snow scenes, and Father Christmas developed. These motifs developed alongside themes that have since fallen out of fashion: pictures of money, food and drink, good and naughty children, hunting scenes, and figures in military uniform. Religious subjects were relatively rare, as the sending of Christmas cards was seen as an extension of secular social customs like Christmas visits and letters rather than religious observances.

Increasingly, many cards (especially at the cheap and cheerful end of the market) were imported from Germany, which in the 19th century led the field in color printing, especially chromolithography (prints made by lithography whereby a stone or plate is made for each color) on a mass-produced scale. Novelty, fancy-shaped, and humorous cards were especially popular.

The Legacy of Christmas Cards

The perennial Christmas themes that crystallized in the late 19th century have lasted well over a hundred years, being expressed in different styles over the decades, or in a self-consciously nostalgic Victorian idiom, but not differing much in content. Today, the greeting card market in the UK is worth over a billion pounds per year (around $1.3 billion), and the British buy more cards per person than any other country in the world, including America.

Most art forms and the social conditions that generate them have a beginning and an end. George Buday spoke of “the fullness of time,” the coming together of technological, historical, social, and economic factors giving rise to the Christmas card industry. I am going to go out on a limb and predict that a perfect storm of factors may herald its demise or at least its decline.

The creative energy may be draining away from traditional-format Christmas cards as a mass medium of exchange and communication, and their days as an aesthetically designed product expressing an individual’s (or a corporation’s) taste, values, and self-image may be numbered.

Whatever new forms are adopted by people to greet each other at different holidays and seasons in the future, I hope that the ethos of the Henry Cole first Christmas card—gratitude for well-being, love of family and friends, and concern for the less fortunate—will not be forgotten.