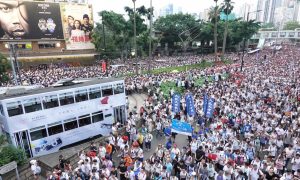 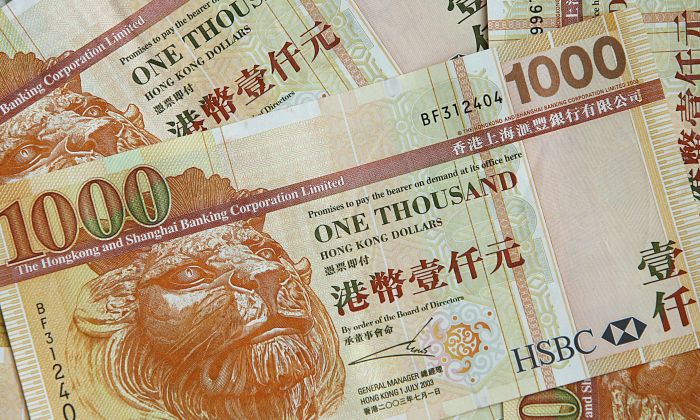 Hong Kong netizens recently encouraged each other to exchange their money into U.S. dollars as much as possible in order to place financial pressure on the government—in the hopes of forcing it to scrap the controversial extradition bill.

The bill will grant Hong Kong’s chief executive, the city’s head of government, the power to approve extraditing a suspect to mainland China, without the need for approval from the legislature.

The proposals have drawn broad opposition, as citizens have expressed concerns that given China’s disregard for the rule of law, the Chinese regime could charge its critics with impunity.

On June 9, over one million Hong Kongers—meaning nearly one in seven—attended a march calling for the bill to be scrapped. However, the city government said it would continue moving the bill through the legislature, triggering a large-scale protest on June 12 that became violent when police fired tear gas, rubber bullets, and bean bags to disperse the crowd.

Exchange Into US Dollars

Some Hong Kongers thought of a creative way to protest the bill.

Ashu, a Hong Kong accountant, posted on her Facebook page on June 10: “[Resisting the extradition bill,] you can do another thing aside from shutting down shops, not going to work, and boycotting classes. You can exchange your Hong Kong dollars into foreign currencies… U.S. dollar is the best choice.” Local groups have called for citizens to participate in the “three suspensions” in protest of the bill: to skip work and school, and shut down businesses.

“The value of the local currency represents the people’s confidence in the government,” Ashu explained. “By exchanging your spare money into foreign currencies, you can avoid the potential loss in value due to the Hong Kong dollar depreciating as a result of the extradition bill—and it’s a way to express your dissatisfaction and distrust with the government.”

With the bill potentially affecting Hong Kong’s legal framework that distinguishes it from mainland China, some investors and local tycoons are already withdrawing their capital and assets in fear of the possible consequences.

U.S. lawmakers, also concerned about the bill eroding the city’s autonomy, has introduced a U.S. legislation that would require the United States to review whether special trading privileges currently afforded to Hong Kong should continue.

Under the U.S.–Hong Kong Policy Act of 1992, the United States has dealt with Hong Kong as a separate entity distinct from China in matters of economics and trade.

But with the extradition bill on the horizon, the U.S. senators are calling for the U.S. government to issue an annual certification of whether Hong Kong is sufficiently autonomous to justify special treatment.

Some Hong Kong citizens are already hypothesizing about whether the potential flight of capital would cause the Hong Kong dollar to depreciate, or cause an even greater financial crisis.

Ashu calculated that if just 30 percent of the one million protestors from the June 9 march have extra savings and can exchange $10,000, it’ll be $3 billion in total.

According to the Hong Kong Monetary Authority, the city’s currency board and de facto central bank, “The official foreign currency reserve assets of Hong Kong at the end of May amounted to $427.8 billion.”

Although $3 billion is less than one percent of $427.8 billion, some like Ashu believed that the  joint effort could still impact the financial system.

Ashu commented that if Hong Kong’s financial system were to crash, mainland Chinese senior officials and business executives who have assets and property in Hong Kong would face trouble. But if Hong Kongers withdraw their cash and exchanged into U.S. dollars in advance, they won’t be impacted.

On Twitter, there are similar posts from people reporting that they had difficulty exchanging their money into U.S. dollars.

Meanwhile, people from mainland China are also chatting online about how to exchange their Chinese currency into U.S. dollars in Hong Kong due to strict capital outflow regulations in China. The Chinese yuan has also devalued quickly since the middle of May as a result of trade tensions with the United States.

Hong Kong has a linked exchange rate system, which can make sure the amount of foreign currency reserves, as well as the exchange rate of U.S. dollars to Hong Kong dollars, is fixed within the range of 7.75 to 7.85 (per U.S. dollar).

In 2019, the exchange rate was around 7.83 to 7.85 until June 12, the day Hong Kong police used rubber bullets, bean bags, tear gas, and pepper spray to disperse protesters.

Ashu and some Hong Kong netizens believe that they can impact Hong Kong’s linked exchange rate system by collectively withdrawing large amounts of cash and exchanging them into U.S. dollars.

Victor Ming Tak Ng, a Hong Kong senior banker and visiting professor at the Baptist University in Hong Kong, does not believe the linked exchange rate system can be changed for now.

Ng is more concerned that the Chinese authorities could indirectly impact Hong Kong. He believed that if Chinese leader Xi Jinping cannot come to a trade agreement with U.S. President Donald Trump at the upcoming G20 Summit—which remains unconfirmed on the Chinese side—the Chinese yuan will depreciate dramatically.

If the Chinese yuan is devalued by 10 percent, “the [Chinese central government] will take U.S. dollars from our [Hong Kong reserve], which is the biggest risk,” Ng said.