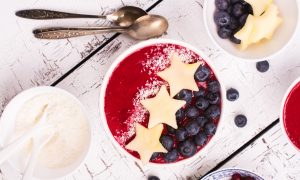 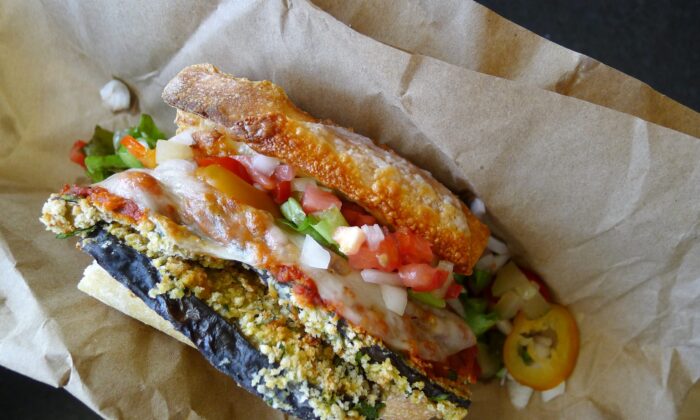 Make extra cutlets to freeze and marinara sauce to can, for future sandwiches at a moment’s notice
By Ari LeVaux
Print

In the neighborhood where I grew up, my go-to spot for culinary excellence was Armando’s Pizza. If I was in a hurry, I’d buy a slice and be on my way. But if I had the time, I’d have an eggplant sub.

Armando’s eggplant parmesan submarine sandwich took just a few minutes longer to prepare than a slice of pizza. Both of them went into the oven for some cheese-melting re-heat. The sub required extra time because I had to eat slowly and enjoy it properly.

I couldn’t rush through those breaded cutlets of meaty eggplant, drenched in marinara, plastered in provolone, wrapped in a fresh Italian roll, and lit up with a carefully chosen assortment of toppings known as “everything.”

The eggplant sub was the most satisfying food I could afford—and more delicious than many foods I couldn’t afford. Years later, when I returned home to visit with my pockets full of available credit at great rates, I threw back eggplant subs like potato chips, at a similar price point, when I could have spent a lot more on food in the big city of Boston.

An eggplant parmesan submarine sandwich seems like such a simple thing. Until you try making one from scratch, and realize the level of preparation behind it. Making that marinara sauce alone can take all day. The cutlets can easily take as long, especially if you go big.

This time of year, when eggplant is abundant and the price is right, I bring home boxes from the market and make trays of eggplant cutlets to freeze. They store remarkably well, for longer than a year without noticeable drop in quality.

In a month or so, meanwhile, it will be time to make a year’s supply of tomato sauce. Then we’ll have the means to make eggplant parmesan subs at a moment’s notice, for some of the slowest, tastiest fast food you’ll ever try.

There are four stages to this recipe: cutting, salting, breading, and finally baking the eggplant.

The salting step removes some of the eggplant’s excess water. The breading is a classic three-stage process: First, coat the eggplant slice with flour. Then, dip it in beaten eggs. The flour holds the egg on, and then you dip it in panko flakes, which stick to the egg. I realize that panko flakes are not exactly authentic Italian, but they make the best coating. It forms a delectable seal around the cutlet, creating a pressure chamber in which the eggplant cooks until silky smooth.

This recipe will make enough cutlets for 12 large subs, because it really makes no sense to go to all of this trouble to make a few cutlets. It makes much more sense to freeze any leftovers. But if you want to start small, divide the recipe by three and just bread one eggplant.

Cut off the ends of each eggplant so the fruit can stand on end. Cut straight down with a knife, starting on one side of the upended eggplant, and cut slices no fatter than a half-inch. Use a peeler on the outside slices so they have two flat, exposed sides.

In a bowl that’s large enough to fit an eggplant cutlet, mix the flour and dry seasonings. In a similar-sized bowl, beat the eggs and milk. In a third bowl, mix the panko flakes with the parsley and cheese. Prepare a cookie sheet for holding the cutlets.

Dredge each piece of eggplant through the seasoned flour and then dip it into the egg wash. Hold it up for a moment so the egg drips off, and then dredge in the panko flakes, pressing them into the eggy cutlets with your fingers. Place each cutlet on a cookie sheet, with no two cutlets touching. When the sheet is full, drizzle the cutlets with olive oil at a rate that drops about a teaspoon of oil per cutlet.

Place the cookie sheet in the preheated oven and bake until you smell nicely browned toast, about 20 minutes. Flip the cutlets and bake another 10 or so minutes, staying alert to the smell of burning. Ideally, some of the cutlets will be a little puffy when you take them out.

To freeze cutlets for later, allow them to cool to room temperature on the cookie sheet. Scrape them loose with a spatula, if necessary, and then put the tray in the freezer. When frozen, transfer to freezer bags. Then whenever you feel the urge, you can make some instant parma, either on a sub roll or in a tray. The cutlets don’t discriminate.

Slice open the roll along one side, so the top and bottom remain connected along the other. Cover one side of this open-faced sandwich with cutlets and smother them in marinara. Lay provolone slices over both sides—atop the eggplant and marinara on one half, and the bare bread on the other—and bake at 400 degrees F until the cheese melts.

Remove from the oven, add “everything,” and serve.