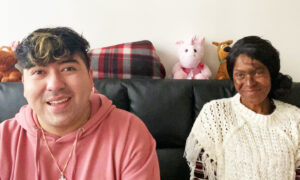 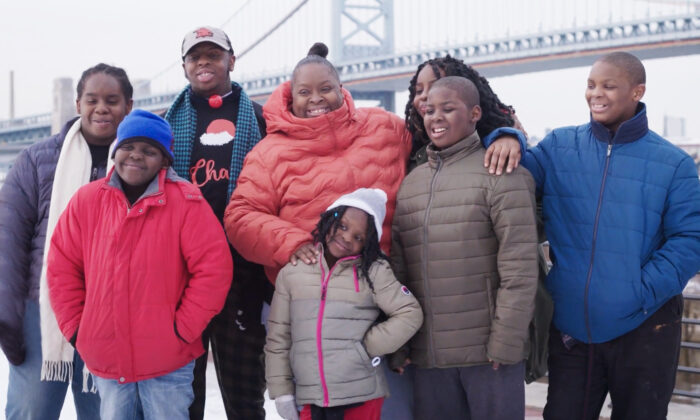 Noreen Owens with her seven children. (Courtesy of All That’s Good via The Harbaughs)
Life & Tradition

Homeless Mom With 7 Kids Gifted House, Thanks to Donations From ‘Griswold Light Display’

What started out as a little holiday fun turned into a life-changing philanthropic movement for a couple who call themselves The Griswolds of New Jersey.

Steve and Gina Harbaugh, of Mickleton, gifted a house to a homeless mom and her seven kids with the help of donations they raised from their 2020 Christmas light display.

Just a few months ago, in December last year, Noreen Owens and her seven kids, aged 6 to 18, were living across two rooms in a Mount Ephraim hotel for displaced families.

Thanks to a miracle gift from Steve and Gina, the Owens family got a rented home in Camden, with rent and utilities covered for at least a year, reported All That’s Good.

The Harbaughs, who have three kids, erect a massive “National Lampoon’s Christmas Vacation” movie-themed light display outside their home every Christmas.

Over the years, word has spread via social media and donations pour in. A concurrent annual toy drive for underprivileged New Jersey kids exemplifies the holiday spirit of giving.

In 2020, the Harbaughs received over 12,000 toys. But the gift of a brand-new home for Noreen and her seven kids was the icing on the cake.

“Typically [the money] goes to a hospital or it goes to a foundation, which is fine, but how can you get deeper into the community, how can you meet these people?” Steve, a real estate developer, says in an interview with All That’s Good.

The Harbaughs have been working with All That’s Good since October. Searching for that “special someone,” a network of connections led to Noreen.

Vince Damiani is one of the two co-owners of All That’s Good. His sister, a teacher at Camden Prep Elementary School, was teaching Noreen’s 6-year-old child, Chaylese, and knew of the family’s plight. She and the school principal put Noreen’s name forward.

Yet prior to receiving her Christmas miracle, Noreen was also serving others. A longtime church volunteer, she was helping run two food programs and a Christmas event, Operation Warm Hugs, collecting teddy bears and blankets for children in need.

Noreen heard about the Harbaughs’ toy drive. Hoping for a collaboration, she messaged Steve on Facebook, with no idea that she was already on Steve’s radar.

All That’s Good crafted a reason for an interview, gleaning Noreen’s backstory while Steve, Gina, and the team prepared a family home for the big reveal. They even found time to contribute to Operation Warm Hugs in the process.

In her interview with All That’s Good, Noreen revealed that her husband left her for another woman after gambling their money away. She and her children were left to fend for themselves. They hit dire straits when they lost their home.

On Dec. 23 last year, Noreen and her kids were driven in a party bus to the new house under false pretenses: a “thank you lunch” for taking part in the interview. Yet, when handed a key in a gift-wrapped box, the penny dropped for Noreen.

“I didn’t think stuff like this really happened to people,” she told NJ.com.

Steve could barely believe what his family’s holiday light display had achieved. He shared a video of the entire journey, from beginning to end, on YouTube.

The Harbaughs plan to relocate their Christmas light display to a larger rural location for Christmas 2021. This time, the theme will be a German Christmas village.

Beyond pledging to help keep Noreen in her new home once the year is up, Steve also thinks this could be the start of a beautiful partnership. Noreen also has renewed hope for the future, claiming that if they work hard, the sky’s the limit for her kids.

“I don’t know where we go from here, but I feel like we can’t be doing this much good and still end up in a bad place,” says Noreen, who plans to continue helping other families at the Mount Ephraim homeless hotel.

(Courtesy of All That’s Good via The Harbaughs)