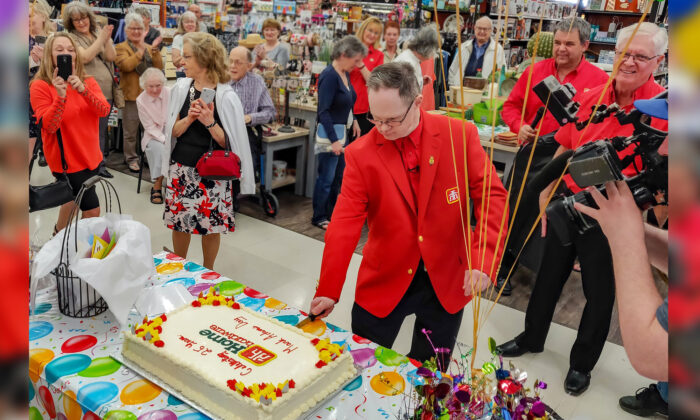 Mark Adams, who was born and raised in the Canadian town of Orillia, Ontario, has been loyal to the same employer for 25 years. In fact, Adams has become such a valued employee and local celebrity that his 25th work anniversary became an event to commemorate. And that is exactly what they did.

The Home Hardware store where Adams works was host to a joyful, well-attended anniversary bash on May 6, 2019. The whole town was invited.

Adams has worked as a door greeter for Home Hardware since he was assigned the role on placement during high school. Home Hardware kept him on; according to Simcoe, Adams was officially hired as a full-time employee in September 1994.

Adams’s sharp memory allows him to recall each customer’s name and myriad personal details, making customers feel especially welcome upon arrival at the store. According to Global News, Adams is also famed for his quick wit.

“Mark is family,” said Home Hardware store owner Chris Locke. “Mark is the kind of guy that brings a smile to our face every single day, and it was just a given we were going to do something to honor his 25 years.”

True to their word, Home Hardware staff filled the Orillia store with colorful balloons, a specially made cake, and over 200 attendees, including members of the local community and even the town mayor.

A queue formed out the door, with people eager to greet Adams with a congratulatory high-five or a hug. “The best part of my job is to meet customers,” Adams, then 45, explained. “Customers are really very nice and very friendly.”

“This is wonderful,” the long-term employee continued; Adams’s 25th-work-anniversary party was a complete surprise to him. “I’m celebrating 25 years in the business and it’s really … I love it,” he added.

On the big day, Adams received a red managerial-style suit jacket as a gift from his co-workers. Orillia Mayor Steve Clarke then presented Adams with a plaque, honoring his 25 years of hard work and dedication to his role at the store.

As the icing on the proverbial cake, Clarke even declared May 6 “Mark Adams Day,” an occasion to be observed by the town at large.

“You get to attend many events as mayor but this day in particular stands out,” Clarke told Global News. “This is a sunshine city and Mark literally brings sunshine [into] everybody’s lives on a daily basis as soon as you walk through this door.”

Adams’s proud mother was delighted to see her son being recognized for staying true to the lessons he learned as a child, she said, to “treat everyone equal, with good manners and courtesy.”

Adams’s old high school principal, Shirley Black, was even in attendance and expressed great pride in her former student. “It’s just so wonderful to see that other people are appreciating him too, because he’s a delight,” she said. “From the time he was first in school he was very outgoing, just a very kind, sweet man.”

Locke hoped honoring Adams’s 25 years of service would encourage other businesses to employ people with Down syndrome, and other special needs, and embrace them as valuable members of the workforce.

“It wasn’t a stretch to bring in somebody like Mark,” the store owner said. “[H]e’s an incredible part of this team.”

“He brings a lot of positivity, he brings a lot of energy,” Home Hardware partner Kirk McLean added, speaking to Simcoe. “Customers are forever asking, ‘Where is he?’ if he’s not here, if he’s away for the day, or if he’s off. People are always asking about him. They have a connection with him.”