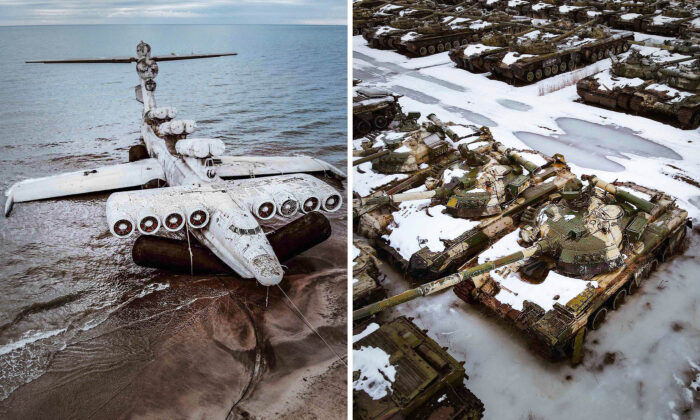 A history fanatic has visited secret remote locations in over 50 countries to take eerie images of abandoned military equipment.

At first glance, these boats, tanks, and airplanes appear to be lined up and ready for action but in reality, they have been left to rot.

Photographer Dmitry Osadchy, from St. Petersburg in Russia, treks through swamps, forests, and deserts to reach the secret facilities which are usually closed to the public and very closely guarded.

The 38-year-old uses a drone to capture the eerie images from above and has traveled the world tracking down abandoned military aircraft and vehicles.

Dmitry said: “I bought my first drone five years ago. I started to shoot mostly ships, then sunken ships.

“Then I realized that I was interested in shooting abandoned equipment.

“Almost all of the equipment is not very accessible. You have to go to distant lands and then often walk through forests, swamps, or deserts. Even then it’s still pretty far for the drone to fly.

“I like to look at them. It’s hard to explain but in this decay there is some kind of indescribable beauty that cannot be found anywhere else.

“That is why I am attracted to abandoned places. It’s the spirit of history and the unknown.”